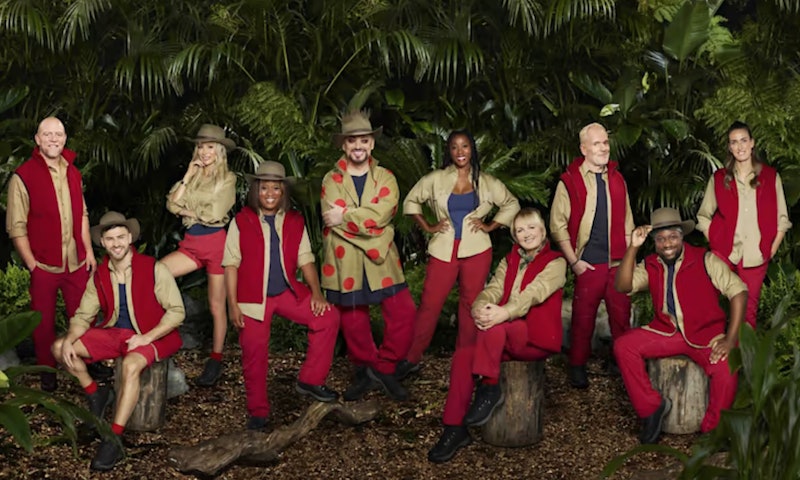 Along with just about every other area of life, the lockdowns severely impacted the television landscape. ITV’s long-running reality juggernaut I’m A Celebrity... Get Me Out of Here! wasn’t spared the disruption and was forced to move production from its native Australia to the UK for the past two seasons. But now, the show has returned in all its glory in the Australian jungle, and things are already off to a dramatic start.

In a surprising curveball, Love Island alum Olivia Attwood was forced to drop out after just 24 hours in the jungle. Confirming the unfortunate outcome, a representative from ITV told Bustle: “As a precautionary measure, Olivia needed to leave the jungle to undergo some medical checks. Unfortunately, the medical team has advised it is not safe for Olivia to return to camp.”

In what has been described as the “worst kept secret on television,” it was revealed soon after Attwood’s early departure that comedian Seann Walsh and former Health Secretary Matt Hancock have officially joined the I’m A Celebrity lineup as late arrivals — and the pair were tasked with a gruesome trial upon their entry into camp on Nov. 8.

Titled “Beastly Burrow,” a preview clip of the Bushtucker Trial set to air on Nov. 9 shows the newcomers crawling on their hands and knees through a muddy, pitch-black tunnel while being showered with creepy-crawlies to the horror of a visibly shaken, and shrieking, Hancock.

Keep scrolling to find out everything else there is to know about I’m A Celebrity... Get Me Out of Here! 2022’s participants.

I’m A Celebrity... Get Me Out of Here! Campmates

The current Conservative MP for West Suffolk, Matt Hancock is perhaps best known as a former Health Secretary, overseeing the UK’s response in the early days of lockdown. As part of the cabinet, he helped to create many of the government’s strict restrictions around social distancing, but was later fired after admitting to kissing his aide Gina Coladangelo (now his partner) at work, in breach of his own rules.

“When I’m in camp, people will just see the real me. Survival in the jungle is a good metaphor for the world I work in,” Hancock said ahead of his I’m A Celebrity stint. “People will see me warts and all. See the human side of the guy behind the podium. I don’t think I’ve got any fears or phobias, but I’m about to find out.”

The Daily Mail previously claimed that Hancock had been given special treatment during his quarantine ahead of heading to the jungle, and had access to his phone and a laptop. His fellow contestants had all devices confiscated. A representative from ITV told Bustle: “Matt does not have his personal phone at all and any laptop access is for constituency and monitored Zoom work purposes only whilst in isolation. Matt does not have general internet access.”

Many of his Westminster colleagues, meanwhile, aren’t impressed. “I was very disappointed with Matt's decision,” Prime Minister Rishi Sunak told The Sun on his way to the Cop27 climate change summit.

After making a name for himself on Brighton’s comedy circuit and at the Edinburgh Fringe, comedian Seann Walsh became known for his regular appearances on panel shows such as Channel 4’s 8 Out of 10 Cats. As per Radio Times, Walsh infamously took part in the 2018 series of Strictly Come Dancing, during which he landed in the centre of a cheating scandal after he was photographed kissing his married dance partner, Katya Jones, while he was also dating Rebecca Humphries.

Before joining the camp as a late arrival, Walsh said he hopes to “change opinions” and have a “new start.”

“As you can imagine I was very scared after the last time I was on a big show because the fallout was not something you would want to go back to.” The comedian added, “The idea of sitting around the fire with people who have probably won gold medals, pop stars and actors putting the world to rights is exciting.”

Singer-songwriter Boy George is the lead vocalist of Culture Club, a group that was part of the New Romantic movement in the '70s and '80s alongside Spandau Ballet and Duran Duran. More recently, he replaced Tom Jones on The Voice UK's fifth series and worked as a mentor on The Voice Australia.

Boy George was long rumoured to be part of this year's line-up and is reportedly the highest-ever paid campmate in the show's history, earning a whopping £500,000. Speaking to ITV, the singer said he doesn't "want to focus too much on what the experience might be like," but his "intention is it is going to be amazing." You can follow the singer on Instagram, here: @boygeorgeofficial.

Former rugby player Mike Tindall is the first member of the royal family to be taking part in the series. Married to Princess Anne's daughter Zara Tindall, this will mark his third appearance on reality TV, having previously been on C4's The Jump and ITV's Bear Grylls: Mission Survive.

Tindall was encouraged to take part by former campmate James Haskell, who he co-presents The Good The Bad & The Rugby podcast with. While he's excited to take on the challenge, Tindall noted "first and foremost" that he'll miss his family. "I will miss my bed too and a nice breakfast," he added. You can follow Tindall on Instagram, here: @mike_tindall12.

Radio DJ Chris Moyles is best known for his long-running stint on BBC Radio 1 and currently hosts The Chris Moyles Show on Radio X. On Oct. 25, Moyles was photographed arriving at Brisbane airport ahead of his rumoured stint on the ITV reality series.

“I have absolutely no idea what my family and friends would think of me doing a show like I'm A Celebrity,” Moyles told The Sun. “I have never asked them. But I think they would be much more nervous about me doing Antiques Roadshow. It should be nice, fingers crossed anyway.” You can follow Moyles on Instagram, here: @chrismoylesofficial.

Property expert Scarlette Douglas will be a familiar face to viewers of C4's A Place in the Sun, as she presented the show from 2015 to 2022. Douglas rose to fame as a singer and dancer, appearing on the West End and as a backup dancer for CeeLo Green, Paloma Faith, Craig David, and even Ant and Dec.

Douglas hopes to win the show, proving everyone who "questioned" or "tried to break" her. "I don't know why they do, but I keep showing I can make it and be better than anyone imagined,” Douglas said. Meanwhile, she told ITV that her parents are "super proud and chuffed" that she's taking part. You can follow the presenter on Instagram, here: @missscardoug.

Actor Sue Cleaver is well known for her portrayal of Eileen Grimshaw on ITV’s long-running soap opera Coronation Street — a role she has played for more than two decades. Following in the footsteps of Attwood and Moyles, Cleaver became the third rumoured I’m a Celebrity star to touch down in Australia.

Speaking to the press ahead of her jungle stint, the actor didn’t give much away, simply telling reporters, “I love visiting Australia.” You can follow Cleaver on Instagram, here: @officialsuecleaver.

It appears Cleaver isn’t the only soap opera star in the 2022 I’m a Celebrity line-up, because Hollyoaks actor and model Owen Warner has also traveled down under for the new season. As per the Daily Mail, Warner is best known for his portrayal of Romeo Nightingale on the long-running Channel 4 drama.

In addition to his acting chops, the Hollyoaks star is also known for his highly-publicised relationship with co-star Stephanie Davis, and his rumoured romance with the former The Apprentice contestant Camilla Ainsworth. You can follow Warner on Instagram, here: @_owenwarner.

TV broadcaster and journalist Charlene White is a regular face on ITV News, in addition to being a panellist on ITV's Loose Women. She recently made a documentary on her past, charting the legacy of the British Empire and how it shaped her ancestry.

White feels like she'll be the mum of the group, and can't wait to get to know her fellow campmates. "I can sit with someone at dinner who I don't know and I love to find out lots about them," she told ITV. "There is nothing wrong about getting to know people. I love to listen and I like consoling people." You can follow White on Instagram, here: @charlenewhite.

After helping England storm to victory during the 2022 UEFA Women's Euros, England Lioness Jill Scott is ready for her next big challenge: the I’m A Celebrity jungle. As per the Mirror, Scott retired from football earlier this year following a hugely successful career that saw her achieve 160 caps for the national squad and great success at clubs such as Everton and Manchester City.

Upon her arrival down under, Scott was asked by reporters if heading into the Australian rainforest was more nerve-wracking than the UEFA Women's Euros final. “That is a very good question but I don't think anything will test my nerves as much as that final,” she responded. “I have never really been confronted by snakes and spiders in England so I don't know how I will react to them, apart from a spider in the bath every now and then.” You can follow Scott on Instagram, here: @jillscottjs8.

It took several attempts to decide to take part in I'm A Celebrity... because he was scared, as he told ITV. "I am going to see what happens but I know I will be doing a lot of screaming that's for sure!" However, Gilligan thinks it's hilarious that Aléshé on the show. While he'll be "far too busy" to vote for Aléshé, the comedian reckons he'll be rooting for him to take part in all the trials. You can follow the comedian on Instagram, here: @babatundecomedian.

Reality TV star Olivia Attwood rose to fame on Love Island back in 2017, when her relationship with fellow islander Chris Hughes kept fans glued to their screens. As mentioned, the star was forced to leave the jungle after just 24 hours, due to medical reasons.

Meanwhile, speaking to The Sun at Brisbane airport on Oct. 25, ahead of her big adventure, Attwood revealed that her biggest fear about the I’m A Celebrity camp is herself. “I am scared of me, in terms of how long the other campmates can tolerate me. I will get myself in trouble somehow, the usual,” she joked. You can follow the Love Island alum on Instagram, here: @oliviajade_attwood.

This article was originally published on March 3, 2022