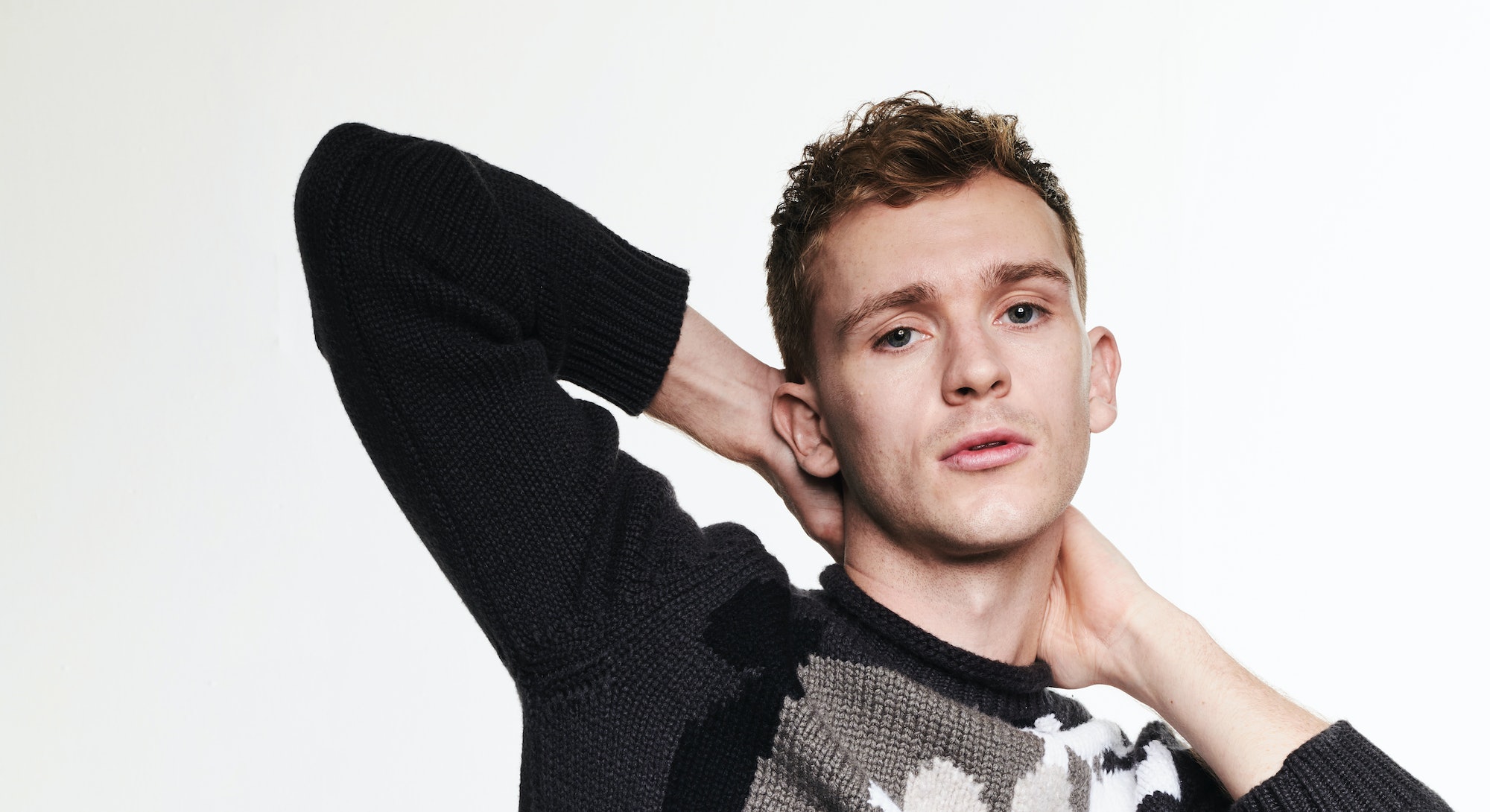 “Like banking, acting is competitive and brutal, at times. Most actors my age, that I know of, are very hungry, and I’m no different to that,” Harry Lawtey tells me from his new home. He’s using the 4G on his phone for our Zoom call, as his Wi-Fi is not yet connected. “I’m very impatient and ambitious, but you’ve got to be,” he reasons.

We’re speaking ahead of the hotly-anticipated UK release of Industry Season 2. The workplace drama won over a legion of fans upon its debut in 2020, with viewers fast becoming hooked to the high-stakes world of investment banking. An unforgiving office culture dominates at the London-based bank Pierpoint & Co., where your salad lunch could easily come with a side of humiliation, or a bump of coke. Season 2 picks up with our former graduates a year after they’ve fought tooth and nail to get a permanent position on the team. Much has changed in the post-lockdown climate, with Lawtey’s character Robert Spearing among the most notable transformations. A stark departure from the outwardly cocky graduate that viewers came to know and (reluctantly) love, Robert has dropped the bravado this time around.

The intriguing character opens up about his past and family life, revealing that his mother passed away when he was young. It’s these glimpses of his backstory that make him somewhat more relatable and accessible than the party boy we first meet. Lawtey, 25, welcomed the chance to explore another side of his character. “With the trauma they’ve all been through, the effort to hide that [vulnerable] side of himself has fallen away,” the actor notes. “It’s laid bare in a much more honest way. He’s come out of lockdown perhaps a little bit less confident, but a lot more sensitive and more humane. It’s nice to play a character that you sympathise with.”

While there have been big changes for Robert since we last saw him, much has also changed for Lawtey. A former pupil of the prestigious performing arts school Sylvia Young, the actor got his big break in Industry, quickly becoming a rising talent to watch. Lawtey, however, didn’t feel an immediate difference in his life upon the series airing. “We were in a very strict lockdown at the time. It felt like the whole experience of the show being out existed in a vacuum for me,” he recalls. “It wasn’t a social time, or one for celebration, which was confusing. We [the cast] had a Zoom call after the first episode came out. It felt a little bit underwhelming, you know.”

While viewers found themselves hooked to the series, Lawtey places himself firmly in the category of actors who struggle to watch themselves on screen. “I’m not proud of that. I wish I could enjoy it more at this point in my career, but I find it difficult,” he admits. “It’s a shame for me, and it’s something I need to try and get better at. You should be able to take satisfaction from something that you’ve helped to make.” Likening it to an artist who completes a painting, and then refuses to ever look at it again, the actor vows to one day be able to enjoy watching himself. “What’s the point, in a way, if you can’t participate in it?” he wonders.

When it comes to Industry, Lawtey would be forgiven for finding some scenes more uncomfortable than others to watch. In Season 1, viewers were both appalled and compelled by the exchanges his character took part in. The show takes an unapologetic, celebratory approach to sex, championing both male and female pleasure. And Robert doesn’t shy away from anything. In one nerve-building and memorable scene, instructed by his sort-of love interest Yasmin Kara-Hanani (Marisa Abela), we witness Robert ejaculate onto a mirror before tasting the spoils. I ask if he ever found himself reading the script and thinking, ‘How on earth am I going to do or say this?’ The actor laughs, telling me: “Yeah, every week. Part of the challenge of being on our show is that the script will always surprise you. It’s always a fun thing to overcome.” For the more intimate scenes, of which there are plenty across both seasons, Lawtey and his co-stars were able to rely on the clear on-set guidelines. “There’s a real process in place for staging those scenes from start to finish,” Lawtey remarks. “For actors of our age, we have an unusual amount of experience in that, which is a good thing. We all have a shared language for it now.”

I’ve been stupidly lucky in the past couple of years, and something I’m realising is that you have to stop and take stock of what a privilege it is to be able to do what you’ve wanted to do since you were a kid.

In Season 2, many of Robert’s more eyebrow-raising scenes are carried out opposite Nicole (Sarah Parish), the investor who once sexually assaulted Harper (Myha'la Herrold) on the drive home from a client dinner. Robert and Nicole strike up an unhealthy relationship, which has a strong sexual aspect, alongside a troubled mentor and mentee dynamic. In one scene, we witness Nicole coaching Robert through a professional call, after he admits he’s terrified when it comes to speaking with clients on the phone. It’s a sweet moment, almost, however, their relationship soon sours. In their final exchange, Robert is submissive with Nicole, and a sexual encounter leads to her calling him a “good boy.” It can’t help but make you shudder a little.

“Robert, at this time in his life, is having a real crisis in confidence, and Nicole fills that void for him. She gives him back his mojo, personally and professionally,” explains Lawtey, who praises Parish as a powerful scene partner. “He feels recognised by her in a way that is both frightening and encouraging at the same time. I think it’s a brilliantly written relationship, and it’s my favourite part of this season to play, for sure.”

As Lawtey notes, “the price of success” is at the crux of the show. Time and time again, we see the characters make large compromises, often moral ones, in order to achieve the things they want. Has this changed his own personal views on money and success, I ask. While the actor admits to being “hungry” like his peers, he’s also keen to not get caught up in the rat race. “It’s something I’m trying to rewire because it’s not a positive frame of mind to be in all the time. First and foremost, you’ve got to remember to actually enjoy it,” he shares, taking care with his words. “I’ve been stupidly lucky in the past couple of years, and something I’m realising is that you have to stop and take stock of what a privilege it is to be able to do what you’ve wanted to do since you were a kid.”

Speaking of pinch-me moments, Lawtey encountered an almighty one when he got to share a scene with one of his personal real-life heroes. I am, of course, talking about the actor’s dad, who enjoyed a walk-on role as a mailman during the Season 1 finale. The actor smiles when I mention the cameo. “No one’s ever asked me about that,” he laughs, before explaining how the special moment came to be. “My dad’s an aircraft engineer in the military, so this isn’t his world at all. But he’s always really loved amateur dramatics,” Lawtey reveals. “He’s got a real passion for it, but in the time and place in which he was born, acting just didn’t seem a realistic or available avenue for him to follow.” Eager to help his dad realise his dream, the actor asked if there were any extra roles going. As luck would have it, the team was looking for someone to play a mailman. It was only after organising the cameo that Lawtey discovered he would actually be sharing the screen with his dad, and that it would be his last scene of the season.

“Wrapping your last scene is always a nice moment on set. And my dad was there for mine, which made me really happy and proud,” he recalls. “He’s been so supportive of me and my whole career, so for him to be involved, it was lovely.” And the actor is hoping to make it a tradition. “I try and get him into everything now. That’s my mission,” he laughs. “It’s a bit like Where’s Wally?”

Ever the supportive parents, Lawtey’s mum and dad very much enjoy watching Industry. “They’re not prudish at all. They’re really fun and cool,” the actor states, proudly. “I recently introduced them to Euphoria, and my dad said, ‘It’s like an American Trainspotting.’” But how do his folks deal with Lawtey’s more, ahem, revealing scenes on the show? “They make tactical choices to go and get a snack or go to the toilet during some bits, but they’re not weird about it,” he says. “In a lovely way, more so than I’m able to, they want to celebrate that I’m involved in it.

Wrapping your last scene is always a nice moment on set. And my dad was there for mine, which made me really happy and proud.

And they’ll be plenty for his family to watch in the future, as Lawtey has an exciting roster of work ahead of him. Set to be released later this year, the actor stars in grisly crime thriller The Pale Blue Eye, alongside acting heavyweights Christian Bale and Gillian Anderson. “It’s an unbelievable cast. I couldn’t believe they let me in,” he says, self-deprecatingly. Marvelling at the screen time he shared with the pair, he adds: “They were brilliant, so welcoming, and they didn’t make me feel as unqualified as I surely was to be in their company.” Lawtey also takes the lead in upcoming ITVX drama You & Me, produced by Russell T Davies. “It’s a very tender, funny comedy drama about a young guy trying to navigate the trials and tribulations of his life,” the actor divulges. “I had a lot of responsibility to take on in that show, and I was really supported by everyone.”

As for what’s next, Lawtey doesn’t have long to settle into his new home, as he’s off to film the politically-charged film Anna. Based on the real-life story of Russian journalist Anna Politkovskaya, who bravely reported on, and spoke out against, the Chechen War. The title will see British actor Maxine Peake take on the title role, with Lawtey portraying her on-screen son. “The film has been planned for years, and obviously now has unfortunately become all too relevant,” the actor reflects. “To be part of a project that feels current and meaningful is a privilege.” And with that, Lawtey is off to dominate the one industry he has always dreamed of occupying.