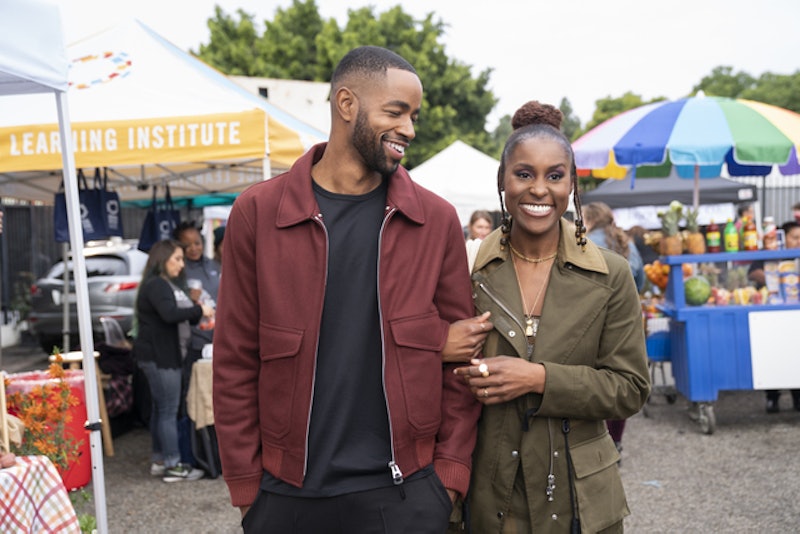 After five seasons, Insecure is coming to an end. Oct. 24 marks the premiere of the Issa Rae comedy’s fifth and final season, putting a cap on the journey of Issa Dee (Rae), Molly (Yvonne Orji), Lawrence (Jay Ellis), and the rest of the gang. But before you prepare to say goodbye, you may need a quick recap of what happened in Season 4, which aired a year and a half ago in spring 2020.

The fourth season of Insecure picks up four months before Issa’s block party, an event she’s planning to highlight and celebrate local Black talent. Helping Issa with her event is Condola (Christina Elmore), a driven Black woman who happens to be dating Issa’s ex, Lawrence. After some tension, the women agree to be mature about the situation and focus on work.

Lawrence and Issa continue to run into each other and repair their relationship throughout the season. At one point, Issa laments to her brother that she dated Lawrence when he was still working on his potential, and now Condola gets to be with the finished product. Cut to Lawrence and Condola, who are having a conversation about their relationship. Condola expresses doubts, feeling that they’re just passing time together. She also makes a comment about Lawrence’s closeness to Issa, which he doesn’t seem to recognize as being uncomfortable for her.

Condola eventually breaks up with Lawrence, and when he returns from interviewing for a new job in San Francisco, he and Issa go on a quasi-date. The two reminisce about their relationship, reflecting on Issa’s infidelity, Lawrences’s immaturity, and what might have been if they’d stayed together. They return to Lawrence’s place and spend the night together. Afterward, Issa helps Nathan move and informs him that she’s back with Lawrence. He responds uneasily, but later apologizes for his reaction.

Meanwhile, Condola contacts Lawrence to inform him that she’s pregnant with his child. She says that he can be as involved with the baby as he wants, but that she ultimately doesn’t need anything from him. Lawrence affirms to Issa that he wants to be with her, but she remains hesitant about rekindling their relationship in the midst of this major announcement.

At the beginning of the season, Molly is still trying to navigate her delicate relationship with Andrew (Alexander Hodge). He tells her that he’s still seeing other people, a fact Molly unsuccessfully tries to brush off. When she seeks Issa out for advice, their conversation pivots back to Issa’s predicament with Condola and Lawrence. Put off, Molly tells Issa that she thinks she secretly enjoys working with Condola exactly because of her proximity to Lawrence.

Later, Molly tries to make dinner for Andrew, but it becomes abundantly clear that he isn’t interested in a conventional relationship and wants to keep things casual. Undeterred, Molly asks Andrew questions about his life and family, causing him to abruptly leave. Molly again tries to talk to Issa about her problems, but she’s unavailable. The next day, Andrew calls Molly while she’s on a hike with Issa and apologizes for his inability to open up.

Molly asks Issa if she should invite Andrew to Thanksgiving, but Issa says it’s a bad idea because Molly tends to scare men away. Later, Issa bails on her Thanksgiving plans with Molly to get dinner with her brother. Molly continues to try to repair things with Andrew, and when he eventually comes around, he and Molly go on vacation to Mexico with his brother Victor (Stephen Oyoung) and Victor’s wife Camille (Camille Chen). However, when Molly is racially profiled in the pool, she gets into a big argument with Victor.

Though Andrew eventually calls Molly his girlfriend, there’s still unresolved tension between them after the Mexico trip. The two have another fight at the end of the season and break up despite Molly’s willingness to work on things.

Molly and Issa’s friendship grows increasingly strained throughout the season, with each feeling like the other is not being fully present or supportive. Though the two attempt to hash out their differences, they can’t seem to have anything deeper than a superficial conversation, and they ultimately come to the realization that they may no longer be a good fit as friends.

Their rift comes to a head at Issa’s block party. When Issa’s headliner drops out before the event, she asks Molly to ask Andrew — a music executive — to help find new talent. But Molly refuses to do so, feeling used by her friend. At the show, Issa tells Molly that she asked Nathan (Kendrick Sampson) to get Andrew’s help instead, causing Molly to feel like Issa went behind her back. Issa confides in Nathan about her fight with Molly, but he assures her that he doesn’t feel used. Issa then decides not to apologize to Molly and avoids going into a bar when she sees Molly already inside. Unbeknownst to Issa, Molly saw Issa intentionally avoid her.

At the end of the season, Molly and Issa finally sitting down to talk, ready to listen and hopefully reconcile. We’ll have to wait for Season 5 to learn if they were able to work things out.