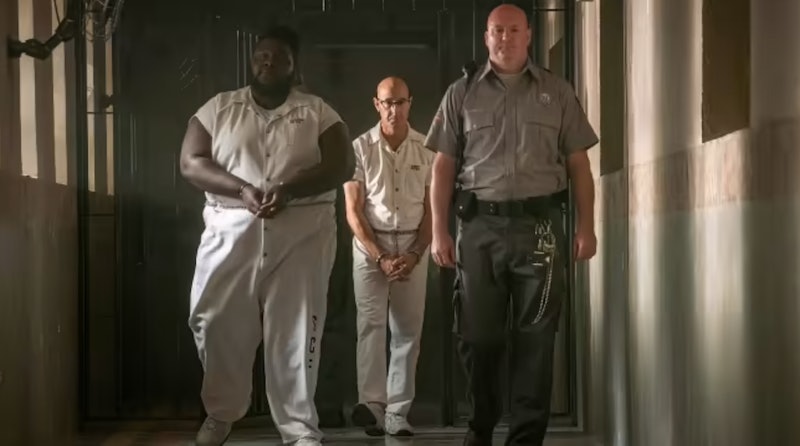 The autumn slate of British television is almost upon us, and the forthcoming BBC drama Inside Man has got everyone talking. Steven Moffat’s four-part series follows the story of a prisoner on death row in the U.S., a Vicar in a quiet English town, and a math teacher trapped in a cellar, who wind up crossing paths in the most unexpected way. Starring Stanley Tucci, David Tennant, Lydia West, and Dolly Wells, the four-part series is bound to capture your attention. Find out everything there is to know about Inside Man, below.

The cast of Inside Man is led by David Tennant (Doctor Who, Des), Dolly Wells (The Pursuit Of Love), Lydia West (It’s A Sin), and Stanley Tucci (Feud, The Devil Wears Prada).

In a casting announcement for the show, the BAFTA and Emmy award-winning writer Moffat, and the Executive Producer for Hartswood Films, Sue Vertue, praised its ensemble cast. “This is the best ensemble we’ve ever had the chance to work with. It’s a rare privilege to see scripts come to life as beautifully as this,” the pair said in a statement.

Meanwhile, the Commissioning Editor of BBC Drama, Ben Irving, said show writer Moffat had “created another brilliantly original and darkly playful series in Inside Man.” He added, “It’s no surprise that it has attracted such an extraordinary cast. This will be a must-watch when it lands on BBC One and iPlayer next year.”

The BBC drama is described as a “captivating four-part mini-series” that revolves around three people from completely different walks of life who cross paths unexpectedly.

Although plot details for the thriller are quite scarce, Moffat teased that this “whodunnit” is “more like a ‘who will do it’ … or possibly a ‘you done it.’ Its central idea is anyone can be a murderer. And it won’t be the one you expect,” as he told RadioTimes in April this year. David Tennant added on Sept. 7 that “it’s not really like anything else I’ve seen, and yet it’s very recognisably Steven [Moffat].”

The first official trailer for Inside Man was released on Sept. 20, giving viewers a first glimpse of the mysterious new series.

Per Radio Times, Inside Man is scheduled to begin on BBC One and BBC iPlayer on Monday, Sept. 26 at 9 p.m, with the second episode airing the following day at the same time. Outside the UK, the series will be available to stream on Netflix.

Inside Man begins on BBC One and BBC iPlayer on Monday, Sept. 26 at 9 p.m

More like this
Ruth Wilson’s New Thriller Spotlights A Controversial Irish Institution
By Darshita Goyal
How A Location Blunder Changed The Outcome Of 'The Capture' S2.
By Darshita Goyal
ITV’s New Cold Case Detective Drama Is Giving 'Mare Of Easttown' – But Scottish
By Sophie McEvoy
UK Audiences Will Soon Be Able To Watch 'The Bear'
By Frances Stewart
Get The Very Best Of Bustle/UK