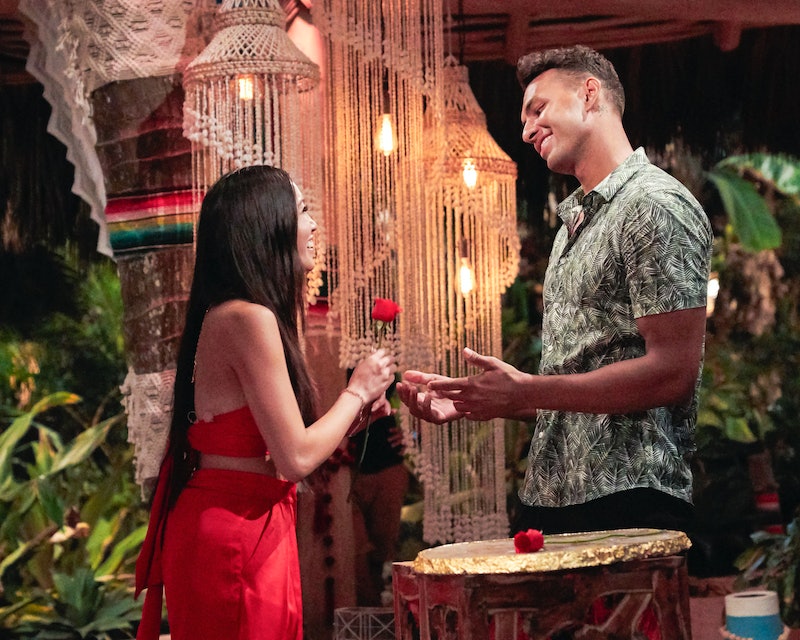 Aaron Clancy didn’t exactly have the best time on Bachelor in Paradise. Throughout the course of Season 7, he earned the unfortunate distinction of getting entangled in four love triangles. So needless to say, being on the show was a pretty tumultuous experience for him.

Though Aaron connected with Tammy Ly early on, their relationship went up in flames when she chose to spend some alone time with Thomas Jacobs, aka Aaron’s rival from Katie Thurston’s season of The Bachelorette. Tensions flared between the three, culminating with both men deciding to move on. Later in the season, it seemed like Aaron had found a new match in former Bachelorette Becca Kufrin — that is, until Thomas swooped in once again and charmed Becca away.

Following two failed relationships on Paradise, Aaron finally managed to spark a connection with new arrival Chelsea Vaughn. The pair went on a date together that included horseback riding and a seaside picnic, and everything seemed to be going great. Later in the episode, however, Chelsea shared a kiss with Ivan Hall, leading to a tense confrontation between Aaron and Ivan that served as the week’s cliffhanger. This perfectly summarizes Aaron’s time on the beach thus far: he’s spent more time fighting with the other men than growing a relationship with someone.

In the penultimate episode, Aaron finally caught a break after Ivan broke the rules of the show to meet Alexa Caves, an alum from Peter Weber’s season of The Bachelor who never arrived on the beach but was being held in the same hotel that the Paradise cast briefly evacuated to during a tropical storm. After getting called out, Ivan decided to leave, allowing Aaron to finally pursue someone without competition. But Aaron still found a way to mess it up: at an ‘80s-theme prom put on for the contestants, Aaron took Tia Booth aside and kissed her, ditching Chelsea in the process and leaving everyone shell-shocked.

Aaron’s late-season attempt to woo Tia will likely be unsuccessful, given the clues that Tia is now dating someone unrelated to Bachelor Nation, and it seems pretty likely that he burned his bridge with Chelsea. It’s unclear if Aaron will manage to leave the beach with someone or still single, but he recently addressed his turbulent time on Paradise on the “Talking It Out with Bachelor Nation” podcast, hosted by Mike Johnson and Brian Abasolo. “[My heart is] not an ice box,” Aaron said, going on to explain how his approach to dating has changed throughout the show. “You go through heartbreak, [and] you’re more hesitant than when you were at 17 ... In Paradise, the Tammy thing hurt me and my feelings like a lot. I’m still bothered by it.”

However, he said that he and Tammy have talked since filming, and that he had no hard feelings towards her. “Grudges are corrosive for your soul,” he said, which Thomas would surely be surprised to hear.

Regardless of his relationship status now, it seems like Aaron is enjoying his life in California. In his most recent Instagram post, the 27-year-old is in a pool grinning from ear to ear, with the caption, “Yo bro who got you smiling like that?” Obviously this could be a reference to a popular Tik Tok audio clip, or maybe it’s a cryptic reference to a new love interest.

This article was originally published on Sep. 28, 2021