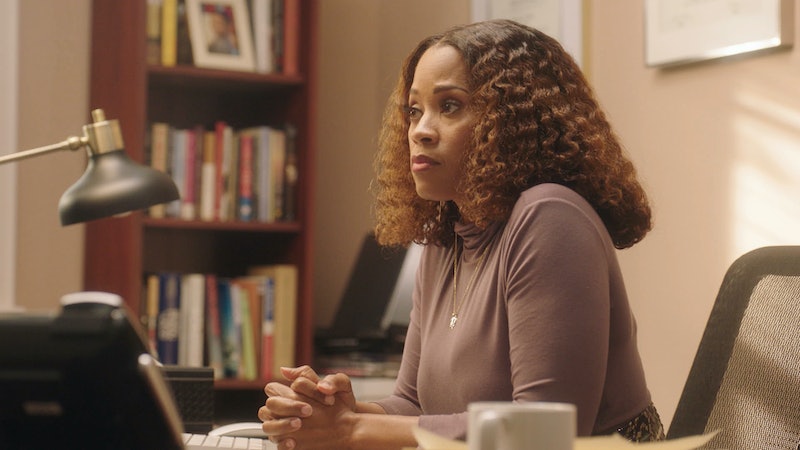 OWN's new drama Delilah follows lawyer Delilah Connolly, who left a high-powered law firm a decade ago to focus on raising her kids. Now, she's channeling her passion for helping people who are disenfranchised by taking on the cases big firms ignore. In preparation for the role, star Maahra Hill spoke to Black women lawyers living in Charlotte, North Carolina — where the show is set — though Delilah isn't based on any specific person. Hill also imbued the character with her own personal experiences as a Black woman.

"I think [Delilah] represents Black women in ways that we haven't seen on a consistent basis. And I think the story itself has not necessarily been told before," Hill said at a press panel for the series in February, per Indiewire, adding that Black women’s resilience and hard work is "front and center" in her portrayal. "I can only hope that [Delilah will] be well-received, but I do think that she's an accurate reflection of women who are trying to balance their lives as well as fight for things that are meaningful to them."

Series creator Craig Wright (Greenleaf) said at the same panel that he wanted to use Delilah's story "to ask more questions about where society's headed, and how Black women and Black Americans are going to continue being a major part of the unfolding of American history," per Deadline.

In order to accomplish that, he and the show's team ensured that they were not only showing Delilah and her best friend/fellow lawyer Tamara Roberts’ lives as career women and mothers, but their roles in their communities as well. "Black women like Tamara and Delilah do not exist in a vacuum – they are part of communities, they're part of neighborhoods, they're part of extended families," Wright said. "One of the great gifts TV can bring right now is specificity… the more we can put those details in and make them part of the story, the better."

More like this
'Grey's Anatomy's New Intern Got Advice From Dr. Bailey Herself
By Grace Wehniainen
'Reservation Dogs' Season 3 May Finally Mend Bear & Willie Jack’s Relationship
By Gretchen Smail
Glenda Cleveland Died 2 Decades After Trying To Turn In Neighbor Jeffery Dahmer
By Brad Witter
Caleb McLaughlin Details Racism From 'Stranger Things' Fans
By Radhika Menon
Get Even More From Bustle — Sign Up For The Newsletter