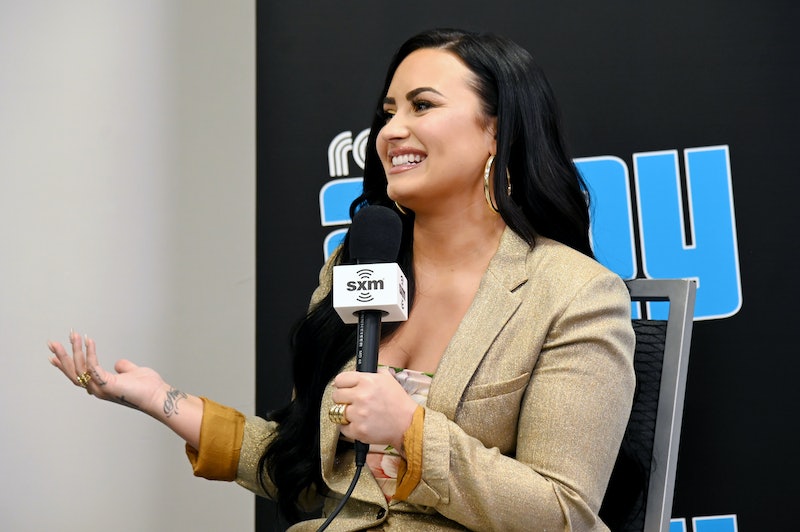 Demi Lovato may have gone through a breakup recently, but she isn’t letting heartbreak stand in her way. The singer released two new songs since September — “Still Have Me” and “Commander in Chief” — and now she is set to host the 2020 People’s Choice Awards on Nov. 15. With so much on her plate, it’s only natural for fans to wonder about the status of her love life. But in a recent interview on Late Night With Seth Meyers, the pop star revealed that she’s been using her time in quarantine to “get to know” herself a little better.

Although she's enjoying some alone time, Lovato didn’t spend all of her time in quarantine by herself. She was first linked to Max Ehrich in March 2020 after they were spotted leaving flirty comments on each other’s Instagram photos. Later that month, the singer accidentally stepped into the frame during one of the actor’s Instagram Live sessions. By the time she realized, it was already too late; she laughed it off, covered her face with a blanket, and quickly exited the frame. In May, the pair officially confirmed they were dating when they appeared in Ariana Grande and Justin Bieber’s “Stuck With U” music video.

The couple took a big step in July 2020 when they got engaged. Lovato announced the news by posting their engagement photos on Instagram, revealing that Ehrich popped the question on a picturesque beach in Los Angeles. "I knew I loved you the moment I met you," she wrote. "I'm honoured to accept your hand in marriage. I love you more than a caption could express but I'm ecstatic to start a family and life with you. I love you forever my baby."

Two short months later, things went south when multiple media outlets reported that Lovato’s family had grown weary of Ehrich and encouraged her to break things off with him. The revelation came after fans uncovered what they believed to be Ehrich’s old tweets. The alleged tweets showed the actor claiming that he wanted to marry Lovato’s former Disney co-star Selena Gomez.

On Sept. 14, Lovato denied the allegations against Ehrich, calling the screenshots of his tweets “fake” on her Instagram story and asking fans to focus on more important matters. But days later, Lovato and Ehrich officially broke up, with People confirming the split on Sept. 24. At the time, the outlet reported that it was a “tough decision,” but one they made together because of their conflicting schedules.

Unfortunately, this was just the beginning of the drama between the former couple. While Lovato never commented on their split, Ehrich claimed he found out about the end of their engagement through a tabloid. The actor went on to share (and then quickly delete) a series of posts on Instagram; per Entertainment Tonight, he asked fans not to "Thank you, next" him (a reference to Ariana Grande’s hit song) and shared multiple photos of him listening to Lovato’s music.

Ehrich seemed to have gotten some closure on Sept. 28, writing on his Instagram story that "one chapter finally closed," implying that he was moving on from the relationship. On Oct. 2, however, he backtracked when he accused Lovato of using their relationship for publicity during an Instagram Live. "I hope this makes you happy,” he said in videos that have since been posted on Twitter. “You just lost someone who loved you fully, completely, infinitely, for everything."

Lovato hasn’t commented publicly on the situation, but given what she’s gone through in just the span of a few months, it’s no wonder she wants to keep things low-key. After what could only be described as a tumultuous relationship, it’s time for the singer to focus on one thing and one thing only: herself.

More like this
Sydney Sweeney Is Engaged To Her Low-Key Businessman Beau
By Jack Irvin and Jake Viswanath
Who Is Nick Cannon Dating & How Many Kids Does He Have?
By Jordyn Tilchen and Radhika Menon
Adam Devine Hilariously Let Everyone Know He’s *Not* Accused Cheater Adam Levine
By Brad Witter
Gigi Hadid’s Dad Shared What He Knows About Those Leonardo DiCaprio Rumors
By Brad Witter
Get Even More From Bustle — Sign Up For The Newsletter

This article was originally published on Jan. 26, 2020