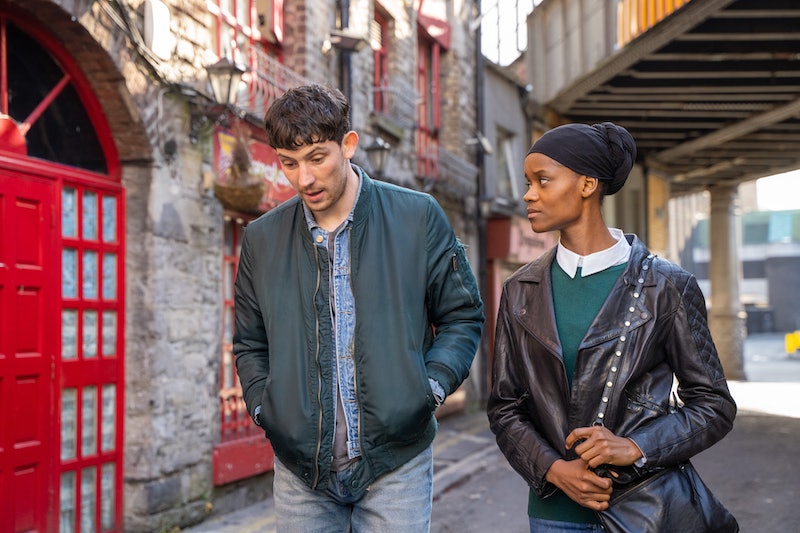 Fresh from rave reviews in the highly-anticipated Black Panther sequel, Black Panther: Wakanda Forever, Letitia Wright is turning her acting prowess on a new project. Starring in Sky’s Aisha, the film follows the story of a young Nigerian woman seeking asylum in Ireland, a topic which is very much a real discussion in the UK right now. Directed by the award-winning Frank Berry, the film also stars The Crown’s Josh O’Connor as Wright’s co-lead. But is Aisha actually based on a true story?

Well, partially, but not entirely. Aisha is certainly inspired by the true experiences of “international protection applicants for the Republic of Ireland,” according to the opening script of the film. So, it is not completely based on one person’s full experience. Aisha sets out to paint a real picture of how asylum seeking people are treated in the UK upon arrival, in the process highlight the ongoing discussion surrounding immigration, UK borders, and the asylum seeking process.

Film director Berry was researching his 2017 film, Michael Inside, which spotlights the brutality of prison, when he discovered that the Irish prison and immigration systems are both under the Department of Justice. Speaking to RTE Radio, he said he “wanted to educate myself on what the reality is for somebody who comes to Ireland seeking international protection. You know, a system that exists in my name as an Irish citizen and I went on a journey of research, primary research, and listening to people’s experiences and collaborating.”

On playing Aisha, Wright told Sky, “Frank [Berry] was able to introduce me to the people who he's been communicating with for the past four or five years of him making the script and putting it together, so I got to have real conversations with women who've gone through similar situations as Aisha.” She added, “I just got to sit with it and allow myself to be a vessel for these stories and to feed that into the character of Aisha.”

More like this
Rupert Grint Just Shared A *Major* Update About Ron Weasley’s Future
By El Hunt
'Boiling Point's TV Sequel Is Set To Deliver A “Rollercoaster Of Emotions”
By Catharina Cheung and Sophie McEvoy
Gerard Butler Insisted On Adding This Pivotal Scene To 'Plane'
By Catharina Cheung
Jemima Khan Used Her Own Life As Inspo For 'What’s Love Got To Do With It?'
By Darshita Goyal
Get The Very Best Of Bustle/UK
Sign up for Bustle UK's twice-weekly newsletter, featuring the latest must-watch TV, moving personal stories, and expert advice on the hottest viral buys.