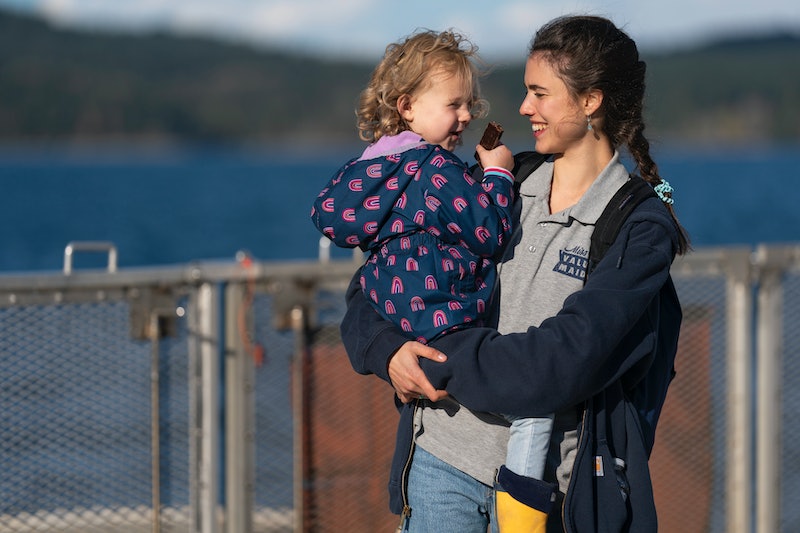 Netflix’s Maid is now streaming, and it could not have come at a better time. The limited series stars Margaret Qualley (Once Upon A Time… In Hollywood) as a single mother who, after fleeing from her abusive ex, is forced to take a low-paying job with a cleaning service that caters to the wealthy. For viewers watching the miniseries during the wage shortage, the show’s timely subject matter may force the question: Is Maid based on a true story?

The answer isn’t quite cut and dry. Maid draws heavily from one woman’s real-life story, but changes some key details. Readers may remember the book on which Netflix’s new limited series is based: Stephanie Land’s bestselling 2019 memoir, Maid: Hard Work, Low Pay, and a Mother’s Will to Survive. Featuring a foreword from Nickel and Dimed author Barbara Ehrenreich, the memoir begins when an unplanned pregnancy upsets the then-28-year-old Land’s college plans, forcing her to spend her days as a domestic worker and attend night classes to continue pursuing her degree.

Both the show and the memoir depict the harsh realities that many Americans living in poverty face. Like Alex — her fictionalized, onscreen counterpart — Land left an abusive relationship and moved into a halfway house with her baby, Story, then just 9 months old. That’s hardly the whole story, however.

Here’s what you should know before watching Maid on Netflix:

Which Parts Of Maid Were Changed For Television?

The basics of Land’s memoir remain unchanged in the new Netflix series. Only this time around, Land’s character is named Alex, and her ex is named Sean (Nick Robinson) instead of Jaime. Her child, a fictionalized version of Story, is called Maddy (Rylea Nevaeh Whittet). Instead of learning to walk in a halfway house, as Story did, Maddy grows up in a subsidized apartment.

The rest of Land’s relatives — and her relationships with them — have been changed for TV as well. In the book, Land and Story live with Land’s father for a short time, and barely see Land’s expatriate mother at all. Meanwhile, in the series, Paula — Alex’s mother, played by Qualley’s real-life mom, Andie MacDowell — is a constant, but unreliable, presence in her daughter and grandchild’s lives.

The location was also changed. Land’s memoir recounts her time living in Port Townsend, Washington — a small town with a population of fewer than 10,000 people — and working in the state’s Skagit Valley region. On the show, Alex is said to live in Port Hampstead, and cleans houses on Fisher Island, both located in Washington; filming for the series took place on Canada’s Vancouver Island.

On The Whole, Is The Netflix Series Accurate?

Netflix’s Maid isn’t a one-to-one recreation of the source material, but that doesn’t mean it isn’t true to Land’s experiences living in poverty.

“Throughout this whole process of giving my story to the hands of strangers,” Land wrote in a recent Instagram post, “I had to force myself to trust they’ll do it justice. They have. By far. And it’s because they took a true interest in learning, and used their own experiences, to truly understand how it feels to be food, work, and housing insecure. John, Molly, and Erin have spent so much time getting to know me and Story, and truly care about us…almost how I imagine family members would.”

How Does The Book End?

Throughout Maid, Land juggles her responsibilities as a mother with her cleaning job and studying for college. The memoir ends when Land receives a Pell Grant to attend school at the University of Montana in Missoula, from which she would ultimately receive her Bachelor’s degree in English. Land leaves readers with a poignant and powerful closing image: that of her and Story walking up a Montana peak to their new home.

Where Is Stephanie Land Today?

Today, Land is remarried with a blended family of four. She lives with her husband, Tim Faust, and their children in Missoula, Montana.