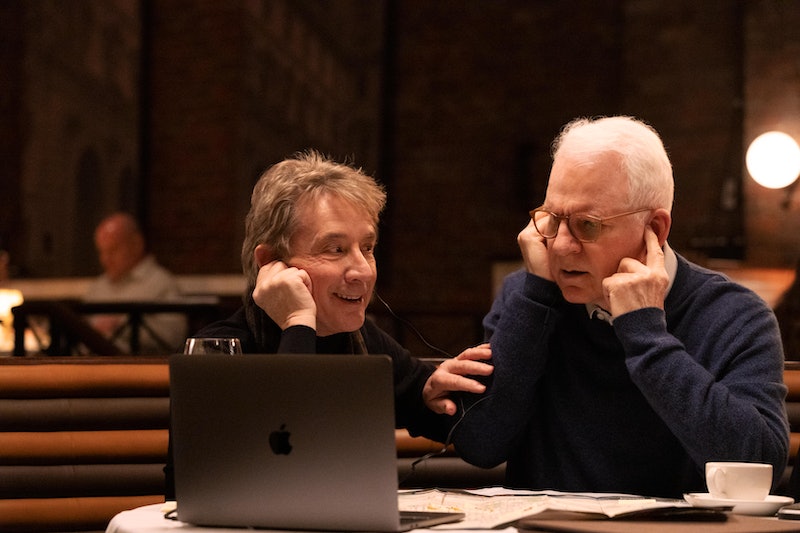 Aside from a shared enthusiasm for the true crime podcast “All’s Not OK in Oklahoma,” there is nothing that particularly qualifies the three strangers in Only Murders in the Building to start their own. They have no background in investigative work or reporting — or even running a podcast, for that matter. But when the death of their neighbor Tim Kono is ruled a suicide despite what they believe is contradictory evidence, they take it upon themselves to figure out the truth.

The show itself is not based on a real podcast, but it’s clearly taking aim at the abundance of true crime podcasts that have sprouted up in recent years. “What f*cking podcast are you all hooked on?” says the police officer who finds the trio after they’ve snuck into the crime scene. “I swear to God, if I meet one more true crime nut.”

True crime has been of interest since long before its proliferation in the 21st century: early British newspapers printed reports of capital crimes as far back as 1500. As literacy rates expanded, crime pamphlets — often discussing murders and other brutal assaults — were heavily consumed by higher classes. And in the centuries since, crime reports — particularly high-profile fare like the 1800s case of Lizzie Borden, Truman Capote’s 1966 novel In Cold Blood, and the 1969 Manson Murders — have tantalized audiences.

Podcasts began building on this fascination with crime in the mid-2010s. One of the first that comes to mind is the New York Times’ podcast Serial. Following its premiere in 2014, it broke records for reaching 5 million downloads faster than any other podcast before, inspiring spinoff podcasts focused on the first season’s case. The true crime podcast boom started from there, with series like Up and Vanished continuing the trend. Before long, crime podcasts accounted for nine of the 10 most downloaded shows in Apple Podcasts.

Though podcasts like Dirty John, Missing and Murdered, and My Favorite Murder helped diversify what true crime podcasts sounded like, Serial created an indelible format that’s often been parodied, including in Only Murders in the Building. The plunky theme music of Serial becomes the inspiration for the soundtrack to Only Murders’ escapades, and the same sort of macabre but sympathetic tone guides both the show and the episodes the three neighbors create (or, at least, that’s the tone they’re aiming for).

Ultimately, though, Only Murders in the Building turns its focus away from simply emulating the podcasts it’s clearly drawing from and instead revels in the idiosyncrasies of the people who are making it. We may not get to listen to a real podcast, but we get something arguably better: a great TV show.

More like this
Pamela Anderson's Sons Brandon & Dylan Have Their Own Hollywood Careers
By Arya Roshanian
Wait, Is Barney Stinson Related To Sophie On 'HIMYF'?
By Gretchen Smail
Pamela Anderson’s Dating & Marriage History Could Be Its Own TV Series
By Jake Viswanath
'Magpie Murders' S2 Will Include A *Major* Shake-Up
By Sophie McEvoy
Get Even More From Bustle — Sign Up For The Newsletter
From hair trends to relationship advice, our daily newsletter has everything you need to sound like a person who’s on TikTok, even if you aren’t.