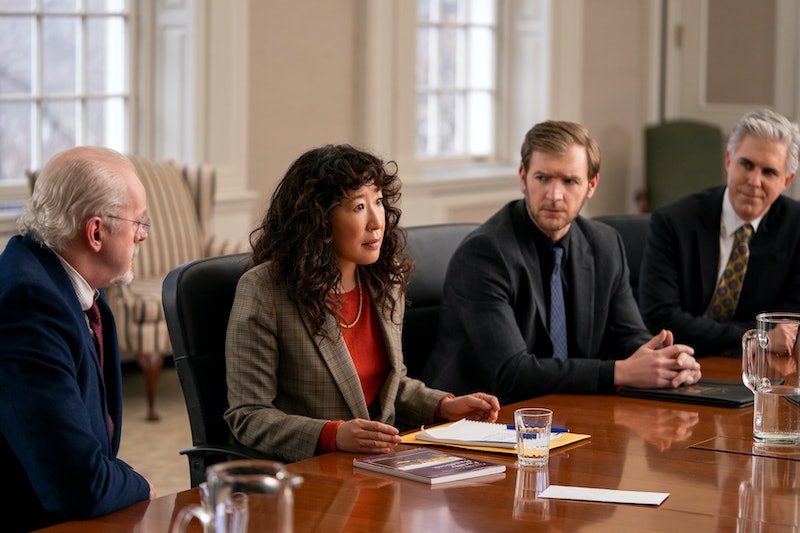 It doesn’t take long for chaos to reign in Netflix’s new miniseries The Chair. After stepping into her now role as chair of Pembroke University’s English department, Ji-Yoon (Sandra Oh) struggles to tamp down on the various politics and conflicts that pop up throughout the department. The university itself isn’t real (though there is a University of North Carolina at Pembroke), but the show very clearly takes aim at elite liberal arts schools, touching on issues like cancel culture and institutional racism.

Nestled in what seems like New England, Ji-Yoon is someone who believes in the prestigious, hallowed halls of Pembroke and all the creativity, knowledge, and opportunity it can foster. When she becomes the first woman — let alone the first woman of color — to chair the English department, she comes in ready to reinvigorate the program. But she is repeatedly undermined and prevented from making the sorts of changes she wants to make. As Angie Han puts it for The Hollywood Reporter, “This is not the tale of a Korean-American woman triumphantly shattering the glass ceiling, but one of her breaking through only to realize she’s teetering on the edge of a glass cliff.”

Throughout the season, we see Ji-Yoon fight an uphill battle to retain Yaz (Nana Mensah), a Black English teacher who excites her students where her older white colleagues don’t. But the higher-ups fail to both recognize her talent or understand the value in diversifying their department — an unfortunately very true-to-life experience for many people in academia. As one Stanford researcher wrote, “Even richly diverse institutions struggle to retain their minority faculty and staff ... Put simply, recruitment does not guarantee retention, so any faculty diversification effort that does not address mentorship, improving the institutional culture, or attending to dual-career needs may end up fueling a ‘revolving door’ with respect to new minority hires.”

The Chair also delves into the much dreaded “cancel culture,” a nebulous concept that has only grown more divisive as the phrase has been twisted in the greater lexicon. When Ji-Yoon’s friend and romantic interest Bill (Jay Duplass) is called out for play-acting a Nazi salute in the middle of class, she struggles to empathize with both sides and ultimately satisfies neither. Bill initially doesn’t think much of it, but other higher education employees have taken a harder stance: in March 2021, one London professor penned an op-ed claiming that universities were “discriminating against conservatives” and that cancel culture has led to “widespread self-censorship” among faculty.

That these issues are pervasive on real college campuses makes it unsurprising that Pembroke seemingly isn’y based on one place in particular. What university would want to be represented like such a gigantic mess?