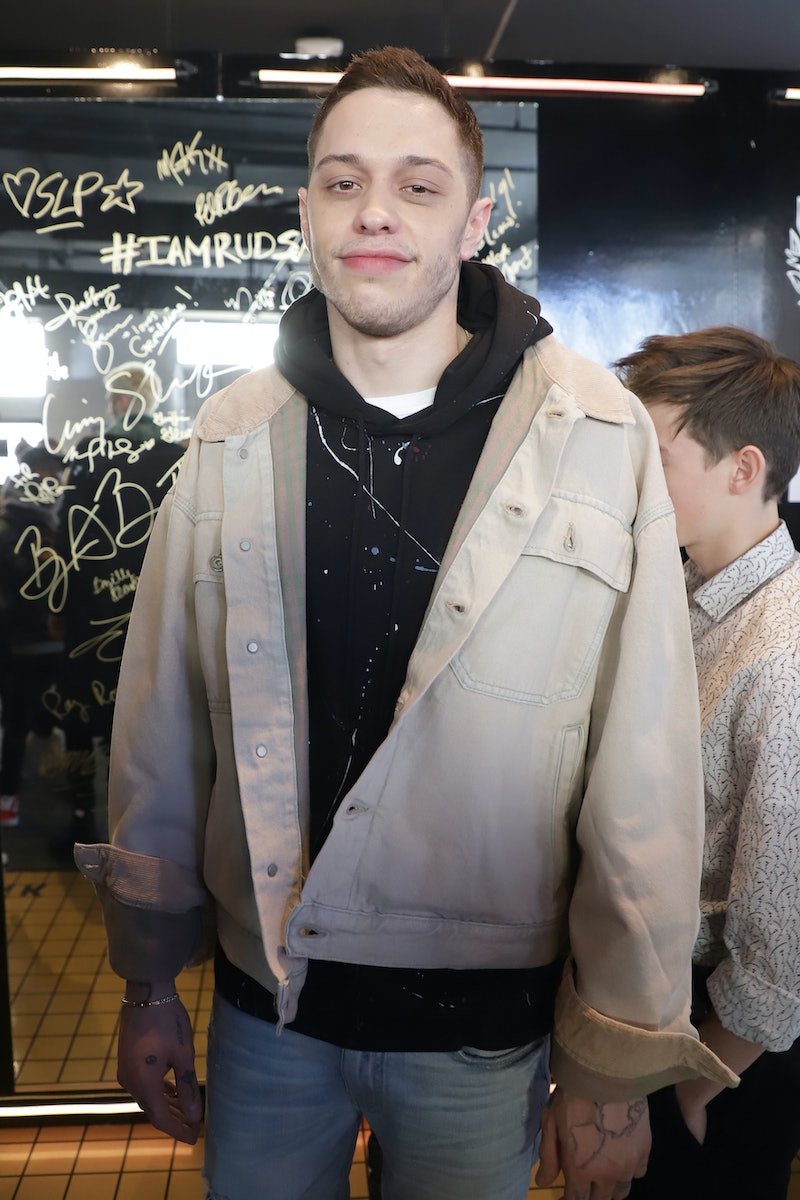 Over the last five years, Pete Davidson has been officially romantically linked to Cazzie David, Ariana Grande (remember their short-lived engagement and her song “pete davidson”?), Kate Beckinsale, Kaia Gerber, and Margaret Qualley. On March 16, a press release was sent out claiming to announce the SNL comedian’s new production company, alleging that he started it with his new spouse, someone named Michelle Mootreddy — none of which is true. Two days later, Mootreddy was reportedly caught sneaking into Davidson’s Staten Island home, per TMZ.

“Pete and Michelle were childhood friends prior to starting Bodega Cats Presents and are married,” read the press release, sent out along with the link to a website appearing to represent the production company. The site not only claims that the two are married but that Davidson’s preferred pronouns are they/them, which he has never publicly spoken about before. It also states that Mootreddy, whom it also says uses they/them pronouns, graduated from the University of Rochester in 2017 with a Bachelor’s degree in Political Science.

Davidson’s attorney spoke to E! News about the “alleged hacker prank,” confirming that the comedian is not married. “The press release being circulated this morning about Pete Davidson is completely false. Not a word of it is true,” stated the attorney. “Mr. Davidson has no idea who this person is. We are investigating and considering all legal and equitable remedies.”

Apparently, Mootreddy was still committed to forging a connection with the comedian. On March 18, TMZ reported that they allegedly entered Davidson’s home through an open side door. He wasn’t home, but a relative was, and they caught Mootreddy sitting at his kitchen table before they called 911. After being taken in for questioning, law enforcement confirmed they were the same person who wrote the press release. According to TMZ, the NYPD has charged Mootreddy with “criminal trespass (misdemeanor), trespass (violation), two counts of stalking (misdemeanor), and harassment (violation).”

Once it was sent out, the outrageous press release quickly caught the attention of fans on social media. One Twitter user was confused, writing, “Wait a minute... Pete Davidson got married?” Even after debunking the scenario, others were still questioning it, writing, “Is Pete Davidson married or nah.” Another tweeted in reference to Mootreddy and wondered what made them decide to put out the press release in the first place, along with claims about Davidson’s preferred pronouns. On the topic of the break-in, a user tweeted, “Imagine your cell mate asking you how you got here... and you tell them ‘you were stalking Pete Davidson.’”

Back in February 2020, Davidson spoke to Charlemagne Tha God about the end of his relationship with 19-year-old model Gerber. “She's very young, and I'm f*cking going through a lot, and it was before I went to rehab,” he detailed. “It's just like, she should be having fun. She shouldn't have to worry about some dude that just has issues and sh*t. She should be enjoying her work.”

Davidson has yet to directly comment on the faux press release or the break-in, but it’s clear he doesn’t know Mootreddy or have any plans to get married at the moment.

This article was originally published on March 16, 2021