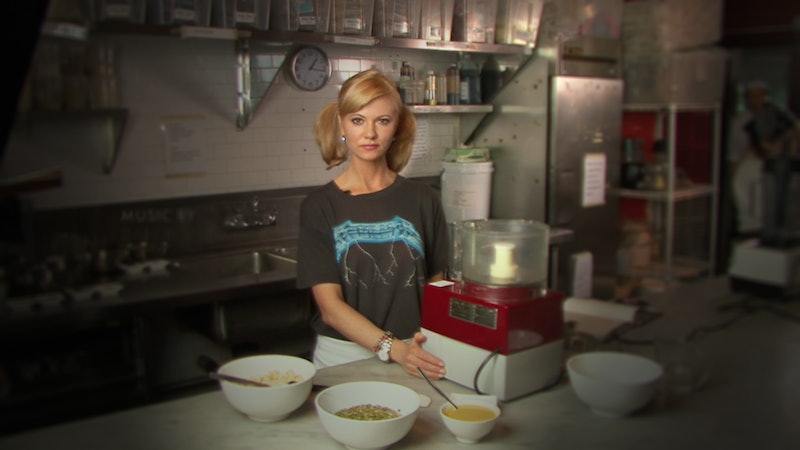 At the height of Pure Food and Wine’s popularity in the mid-2000s, it wasn’t uncommon to spot celebrity guests. Anne Hathaway, Katie Holmes, Janet Jackson, Alec Baldwin, and Common were among those who were seen dining at the Manhattan eatery, which was opened in 2004 by Sarma Melngailis and her then-boyfriend, chef Matthew Kenney. But as recounted in Netflix’s docuseries Bad Vegan, the once-booming restaurant took a downward turn after Melngailis married Anthony Strangis, aka Shane Fox. And by July 2015, Pure Food and Wine had permanently closed.

After Melngailis and Kenney broke up in 2005, she took control of the business with the help of investor Jeffrey Chodorow. In 2010, she opened One Lucky Duck juice bar in Manhattan and, two years later, established a raw food production center and online sales office in Brooklyn. During its heyday, Pure Food and Wine frequently landed on several top NYC restaurants lists, including in Forbes and New York magazines.

Melngailis met Strangis on Twitter in 2011, and the two married in 2012. By 2013, Strangis had become “a regular presence at [Melngailis’] companies and [began exercising] authority over the business,” an investigation later found. According to a 2016 indictment, Melngailis allegedly transferred over $1.6 million from the business accounts to her personal bank account between January 2014 and January 2015. Strangis allegedly spent a majority of that money at Connecticut casinos, specialty watch retailers including Rolex and Beyer, and various hotels in Europe and New York. Shortly afterward, employee paychecks bounced, leaving 98 workers without pay. Pure Food and Wine’s doors were reportedly papered with signs protesting unpaid wages, and the business closed.

Thanks to a small handful of investors — who’d also allegedly been duped by Strangis posing as a potential buyer — Pure Food & Wine and One Lucky Duck’s Brooklyn location reopened in April 2015. Within months, Melngailis allegedly had, again, transferred large sums of money to her personal account. She and Strangis went on the lam, and employees’ paychecks bounced once again. Per the 24-count indictment, the pair allegedly defrauded 84 workers of up to $3,500 each for a total of over $40,000. That July, Pure Food and Wine shut its doors for good.

Authorities eventually found and arrested Melngailis and Strangis at a Tennessee hotel in May 2016. The couple faced charges of second-degree grand larceny, second-degree criminal tax fraud, first-degree scheme to defraud, violation of labor, and other crimes. Following their arrests, Melngailis accepted a plea deal and served four months in jail plus five years probation. Strangis pleaded guilty to four counts of grand larceny in the fourth degree, and was sentenced to one year in jail and five years of probation in addition to having to pay $840,000 in restitution.

Though a group of former employees reportedly tried to re-open Pure Food and Wine under new ownership, they were ultimately unsuccessful. Melngailis, who’s since divorced Strangis, told the New York Post in 2019 that she would be open to trying to open it again herself. “If there was some magical opportunity to open the same restaurant in the same place, I would do it in a heartbeat,” she told the paper after her release from Rikers Island. “I think New York would take me back.”

More like this
Anthony Templet Wants To “Live Normally” After Killing His Father
By Brad Witter
The 'Black Bird' Stars Are Both Heading Back To Apple TV+
By Brad Witter
Dr. Anna Pou Is Still Practicing Medicine After Facing Murder Charges
By Brad Witter
This New TV Show Revisits The Most Controversial True Story From Hurricane Katrina
By Brad Witter
Get Even More From Bustle — Sign Up For The Newsletter