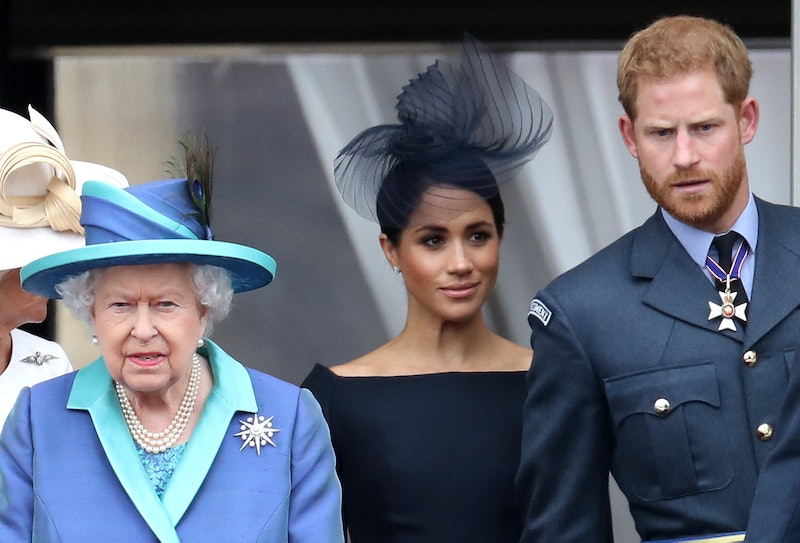 Meghan Markle and Prince Harry have a lot to say about their time in the royal family, and now, they’re not holding back. In their new Netflix docuseries Harry & Meghan, which premiered on Dec. 8, the couple tells their love story and opens up about the decision to leave their positions as senior working members of the royal family. And this time, the Duke and Duchess of Sussex are supported by witnesses who are speaking out for the first time about their lives at Buckingham Palace.

Netflix’s press release teases that some of the couple’s family and friends, “most of whom have never spoken publicly before about what they witnessed,” will speak out in the docuseries. The series was even filmed before Queen Elizabeth II’s death on Sept. 8, causing speculation that she could be included somehow in the show. So, is the queen or the royal family featured in Netflix’s Harry & Meghan?

Unsurprisingly, the royal family does not appear in the first three episodes, and the docuseries begins with the disclaimer: “Members of the Royal Family declined to comment on the content within this series.” However, Meghan and Harry do reveal some details of their experiences with the royal family, including the Duchess of Sussex’s “surreal” first meeting with the late Queen Elizabeth. Harry’s grandmother was the first senior member of the royal family that Meghan met, and the Duchess didn’t know she was going to meet the queen “until moments before.”

“We were in the car and we were going to the Royal Lodge for lunch, and Harry was like ‘my grandmother is there, she’s going to be here after church.’ I remember being in the car and he was like ‘you know how to curtsey right’ and I just thought it was a joke.” Meghan added that, after doing a rather exaggerated curtsey in front of the queen, Princess Eugenie and Sarah Ferguson later told her she “did great.”

Speaking in the doc, the Duke of Sussex also revealed that, while Meghan’s first meeting with the queen did go well, other members of the royal family weren’t quite so convinced and didn’t think their relationship would last. “The fact I was dating an American actress was probably what clouded their judgment more than anything else at the beginning,” Harry claimed.

Despite trepidation among some royal family members about the pair’s relationship, Meghan also recalled her “fun” first Christmas at the Sandringham estate. “It's just like a big family like I always wanted ... There was just this constant movement and energy,” she disclosed, adding that she was seated next to Harry’s late grandfather, Prince Philip, during Christmas dinner. “I just thought it was so wonderful and I was like [to Harry] 'Oh we chatted and it was so great. I talked about this and this' and [Harry] was like 'you had his bad ear, he couldn't hear anything you were saying.’”

Royal experts previously said that no members of the royal family would be included or speak in Harry & Meghan. In fact, the Daily Mail reported that precautions were taken when royal family members interacted with Prince Harry and his family during the queen’s Platinum Jubilee celebrations in June 2022 to ensure their likeness wouldn’t be onscreen. “They kept a very low profile and there wasn’t even a photograph with baby Lilibet, whose birthday it was at the time,” he said. “And apparently that was made clear that the queen wouldn't pose for a photograph in case it happened to appear in a series like this one.”

Nonetheless, the queen remains a big part of their hearts. Four days after her death, Prince Harry paid tribute to his grandmother, affectionately calling her a “guiding compass” and recalling their most sentimental memories. “Granny, while this final parting brings us great sadness, I am forever grateful for all of our first meetings — from my earliest childhood memories with you, to meeting you for the first time as my Commander-in-Chief, to the first moment you met my darling wife and hugged your beloved great-grandchildren,” he wrote. “I cherish these times shared with you, and the many other special moments in between.”

Meghan also remembered her time with Her Majesty The Queen in an October interview with Variety, explaining how “grateful” she was to be with her husband during his trying time. “What’s so beautiful is to look at the legacy that his grandmother was able to leave on so many fronts,” she said. “Certainly, in terms of female leadership, she is the most shining example of what that looks like. I feel deep gratitude to have been able to spend time with her and get to know her. It’s been a complicated time, but my husband, ever the optimist, said, ‘Now she’s reunited with her husband.’”

More like this
Everything To Know About 'The Real Housewives Ultimate Girls Trip' Season 4
By Jake Viswanath
Andy Cohen Apologized To Larsa Pippen After A 'RHOM' Season 5 Reunion Dust-Up
By Brad Witter
'The Crown' Season 6 Has Suspended Filming "Out Of Respect" For The Queen's Death
By Bustle Staff
Prince Harry Incorrectly Recites Christina Aguilera’s “Genie In A Bottle” Lyrics
By Jake Viswanath
Get Even More From Bustle — Sign Up For The Newsletter
From hair trends to relationship advice, our daily newsletter has everything you need to sound like a person who’s on TikTok, even if you aren’t.