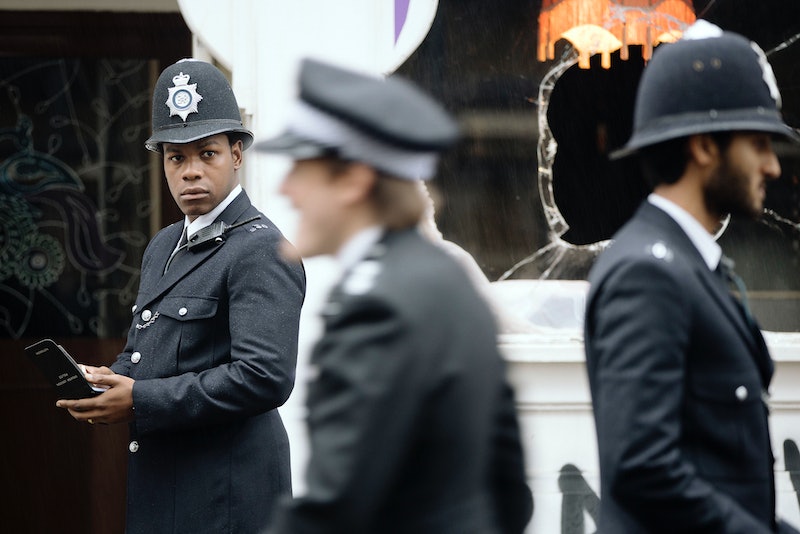 Red, White and Blue is the third film in critically-acclaimed director Steve McQueen's Small Axe series for BBC. Out this Sunday, it gives a real insight into London's Met police in the 1980s, through the eyes of Leroy Logan. Logan is played brilliantly by John Boyega, and we watch as the story unfolds and he faces conflict from all angles – from his family, his community, and within the force. So, is Red, White and Blue based on a true story?

Three of the five films in the Small Axe series are based on true stories, while the other two – Lovers Rock; and Education – are fictional, but inspired by the Black lived experience. Meanwhile, Mangrove and the upcoming Red, White and Blue, and Alex Wheatle are based on actual events.

Red, White and Blue tells the true story of Leroy Logan, a young forensic scientist who was born in Islington, London to Jamaican parents. He joined the police in 1983, after seeing his father assaulted by two policemen, an ambition fuelled by his desire to change racist attitudes from within the force.

The film was co-written by novelist and playwright, Courttia Newland, alongside McQueen. He explains, in a statement to Bustle from the BBC: “We show Leroy’s struggle and what he had to do to come out of it. As a man, Leroy is so inspirational and positive. He reconnected with the community when he really could have gone crazy and internalised the racism. Instead, he became something exemplary to us as a community to this day.”

Newland draws parallels with Logan's story and current events, highlighting its relevance in 2020: “Leroy Logan’s story shows how he went right into the belly of the beast to try and fix the system from the inside. He worked with his community and became the iconic figure that he is today.”

While Red, White and Blue focuses on the early years of his career, Logan faced continued racism throughout his 30 years in the Met. A particularly difficult time followed the Macpherson inquiry into the murder of Stephen Lawrence, who died in April 1993. In that same month, Logan held the founder-member meeting of what eventually became the Black Police Association. Years later, in 2003, Scotland Yard led an investigation into an alleged false expenses claim by Logan, which ended up costing the Met hundreds of thousands of pounds. Logan was cleared, and later took the Met to an employment tribunal for victimisation.

On meeting Logan, Boyega said in the BBC statement: “I loved meeting Leroy. What was fantastic about it was that we had the chance to really just break bread and talk in a casual environment. I invited him to a spot that I usually go to. Just talking to him about his life, there were parallels, like he had worked in youth clubs and youth centres that I had been to as a kid and I had benefited from, like the Damilola Taylor Centre.”

“I was able to ask so many questions that he answered with such honesty,” Boyega continues. “I really appreciated that because I was able to see certain things and make adjustments. It was little intricate stuff, the music he liked listening to, the kind of stuff he got up to with his wife, what the vibe was like in London.”

Speaking to The Guardian ahead of Red, White and Blue , Logan said the young actor perfectly encapsulated him. “John just got it,” he says. “He saw me as what I was, a Black man, and a Black cop trying to make change from within.”

In 2001, Logan was awarded an MBE by the Queen, and in 2003 he retired from the force, subsequently publishing his memoir Closing Ranks: My Life As A Cop in September this year. Now 63, Logan continues to work with youth in the community through his charity, Voyage Youth.