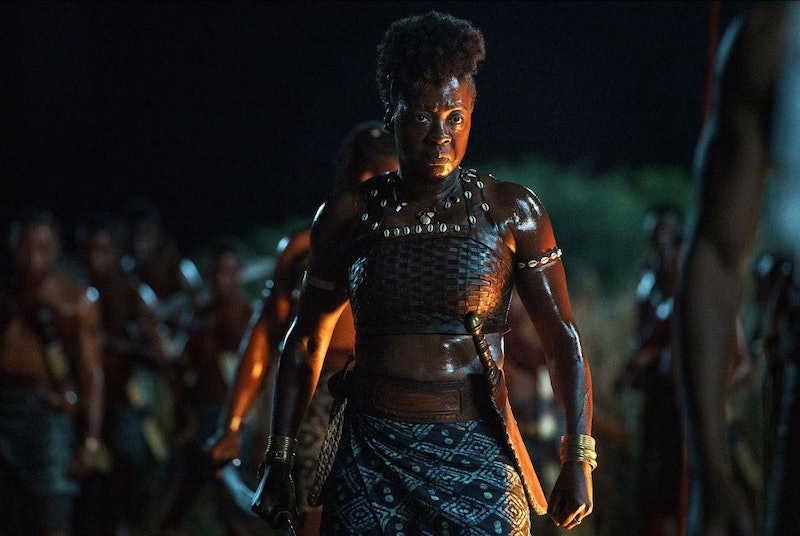 She’s not quite a superhero, but Viola Davis’s new role is every bit as strong and badass as our Marvel and DC comic book favorites. In The Woman King, Davis plays the leader of an all-female unit of warriors in 1820s West Africa. Directed by Love and Basketball’s Gina Prince-Bythewood, the film also stars Thuso Mbedu, Lashana Lynch, Sheila Atim, and John Boyega as other residents in the ancient kingdom of Dahomey.

As a historical epic, the film begs the question: is it based on a true story? The short answer is yes and no. Introduced as a film “inspired by true events,” the setting of Dahomey and the warrior group known as Agojie or Dahomey Amazons did exist — and it’s not the only movie to pull inspiration from this group. Marvel’s Black Panther also introduced a cast of female fighters within its story, which was reportedly modeled after the Agojie group as well. If you’re surprised to learn that this group is real, you’re not alone. Davis herself was also unaware of the history, telling Vanity Fair in July, “The only thing I knew, literally, was that there were women somewhere in Africa that were called Amazons.”

For The Woman King, producer Maria Bello traveled to the present-day West African nation of Benin (where Dahomey used to exist from the 17th-19th century) to learn more about the history of the Agojie. The film focuses on the warrior Nanisca, played by Davis, who is tasked with training a new generation of warriors to fight against enemies who “violated their honor, enslaved their people, and threatened to destroy everything they’ve lived for,” per Deadline.

Nanisca is fictional but might be based on a young Agojie warrior, according to the blog History vs. Hollywood. In December 1889, a French naval officer named Jean Bayol met a teenage recruit named Nanisca who murdered a prisoner in front of his eyes in a gruesome manner. That kind of backstory seems plausible for Davis’s character, but it’s likely the real Nanisca did not ascend to the heights of being named General as Bayol claimed that he found the real teen dead on the battlefield three months later.

Boyega plays King Ghezo, a real historical figure who ruled over Dahomey from 1818 to 1858 and expanded the Agojie contingent significantly. But his legacy is also closely tied with slavery. “It’s estimated that from the 1720s until 1852, when the British imposed a naval blockade, Dahomey’s rulers sold hundreds of thousands of people from neighboring tribes and nations to the British, French, Portuguese, and others,” National Geographic reported.

However, you likely won’t see that side of the Dahomey kingdom in The Woman King. In the film, Nanisca is seen trying to convince King Ghezo to trade palm oil instead of slaves which, while a real stance of the Agojie, is highly exaggerated in this depiction, according to the Smithsonian Magazine. “Though Ghezo did at one point explore palm oil production as an alternative source of revenue, it proved far less lucrative, and the king soon resumed Dahomey’s participation in the slave trade,” the publication reported.

So while the film is inspirational and features a strong, aspirational female army at the center, take The Woman King with a grain of salt. There’s definitely some Hollywood movie magic at play here.

More like this
Yes, That's Lindsay Lohan's Sister Singing In The 'Falling For Christmas' Movie
By Radhika Menon
'The Holiday' Director Just Addressed *Those* Sequel Rumours
By Sam Ramsden
Keke Palmer Finally Showed Angela Bassett Her Famous Impression Of Her
By Stephanie Topacio Long
You Definitely Know The Voice Of Shuri's AI In 'Black Panther: Wakanda Forever'
By Brad Witter
Get Even More From Bustle — Sign Up For The Newsletter