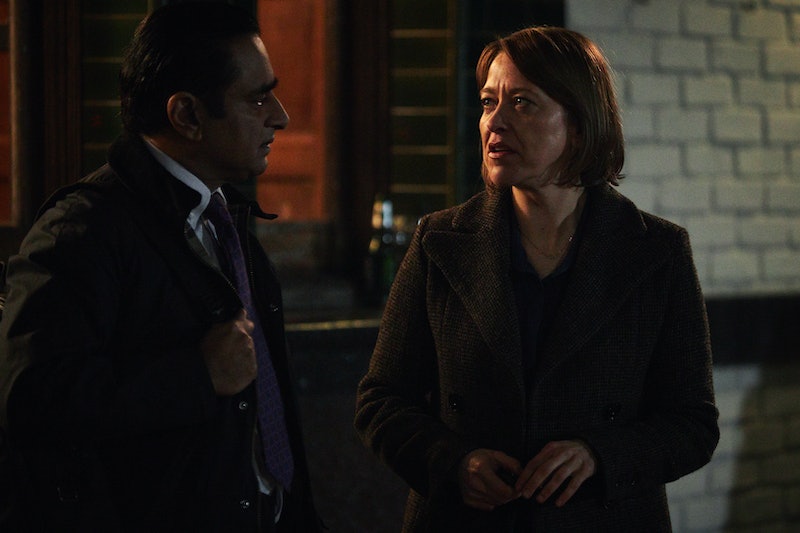 Over the last four years, ITV's Unforgotten has built up a loyal fan base, with each cold case that DCI Cassie Stuart and DI Sunny Khan pick up becoming more gruesome and mysterious than the last. As Nicola Walker and Sanjeev Bhaskar pick up where they left off, season four promises to be the most captivating to date. But we can't help but wonder: is season four of Unforgotten based on a true story?

Season four begins with the discovery of a dismembered body in a scrap metal yard. However, the detectives are in luck: they discover a unique Millwall Football Club tattoo that helps them identify the victim as Matthew Walsh, a young man in his mid-twenties who went missing in March 1990. When DCI Stuart and DI Khan check out the scene, they come to the conclusion that the remains may have been kept in the freezer for a significant period of time – potentially 30 years.

The identification of the body is only the beginning. The investigators track down the person who bought the freezer, who has since died, making the mystery behind Walsh's death a difficult one to unravel. Along the way, they uncover secrets that promise to ruin the lives of a whole network of new characters.

This six new episodes are a difficult time for DCI Stuart too, as she plans to wrap up her career and retire. Problems at home and her dad’s dementia call everything into question. Lewis Reeves will return to the series as DC Jake Collier, while Jordan Long takes up his role as DS Murray Boulting, and Carolina Main as DC Fran Lingley.

Series creator Chris Lang told Radio Times that this season will also examine “society’s relationship with the police,” adding that the show’s central “investigation will show the best of the police and the worst, and at a time of unprecedented cutbacks, it will ask a number of difficult questions about the police force as an institution.” Though very timely in this way, season four is not based on true events.

Speaking to Good Housekeeping about how Lang creates the series, Walker said: “With these scripts I find it impossible to tell who the killer is because that’s how Chris writes… He leads you down one lane, and then of course he’s just toying with you.”

Lang told the Guardian that he had to reconsider his script and how many people were involved with the show due to filming restrictions during COVID-19. “There were other ways of doing it, I realised, and necessity is the mother of invention. So quite often, the compromises I made ended up working better." The show's production was paused when the pandemic hit, he explained: “We had filmed 11 weeks of Unforgotten with Nicola Walker and Sanjeev Bhaskar before we had to stop – and then we did four-and-half weeks in September, but I’d be surprised if you could tell the difference."

You can watch the first three series of Unforgotten on Netflix. The first episode of season four will air on Feb. 22 at 9 p.m. on ITV.