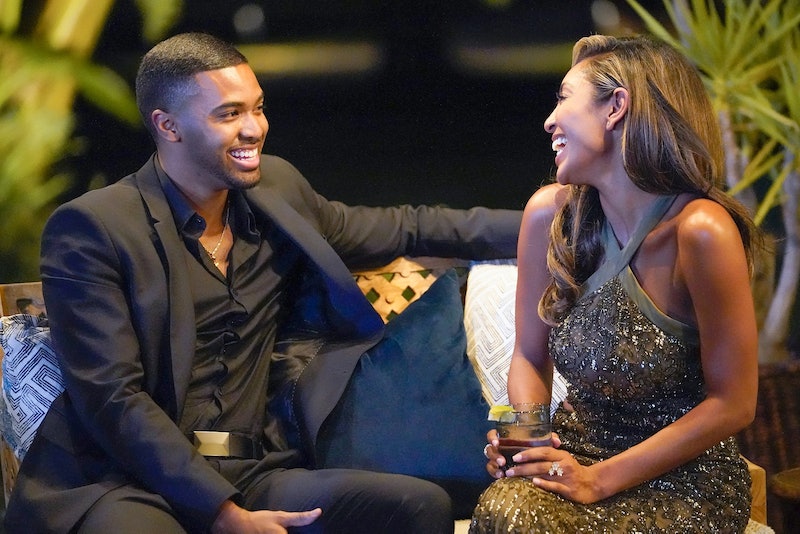 Ivan Hall quickly became a fan favorite on Tayshia Adams' season of The Bachelorette, but don't count on him returning to the franchise anytime soon. On Tuesday, Feb. 23, Hall told E!'s Daily Pop that he would likely decline the opportunity to go on Bachelor in Paradise if Chris Harrison returned to host. According to Hall, it would simply be "too soon" after the show's longtime host defended Bachelor contestant Rachael Kirkconnell's racist past.

"I definitely think that was the right step for Chris to take a step back for now," Hall said, referring to Harrison's decision to put his Bachelor duties on hold for an unspecified amount of time. "I don't know how this will all shake out, but for myself, for example, if they have future shows and if they were to ask me to be on Bachelor in Paradise or something like that — and I'm sure a lot of the other contestants feel this way as well — I wouldn't feel comfortable if Chris is there, to be quite frank."

"[I'm] not saying he can't make a recovery, he can't learn from all this, but it would just be too soon," Hall added, explaining that a short break from the franchise wouldn't suffice. "I think he just needs to take some time, really look into himself, and really just have a lot of tough conversations and understand why he believes the things he believes at this point in his life."

Hall's statement comes just a few weeks after Harrison came under fire for asking for "a little grace, a little understanding, a little compassion" from the "woke police" after photos resurfaced of Kirkconnell (one of Matt James' front-runners) at an antebellum plantation-themed party in 2018. Additionally, images of the 24-year-old dressed in a Native American costume made the rounds on Reddit.

On Feb. 11, Kirkconnell took to Instagram to apologize. "I am sorry to the communities and individuals that my actions harmed and offended," she wrote, adding that her age isn't an excuse for her ignorance. "I didn't recognize how offensive and racist my actions were, but that doesn't excuse them."

Harrison also walked back his comments, writing on Instagram: "I have spent the last few days listening to the pain my words have caused, and I am deeply remorseful. My ignorance did damage to my friends, colleagues, and strangers alike. I have no one to blame but myself for what I said and the way I spoke." After apologizing for "excusing historical racism" and evoking the term "woke police," Harrison revealed he would be taking a step back from the franchise and wouldn't be hosting James' After the Final Rose special.

While it's unclear when exactly Harrison plans to return to the series, Hall isn't the only one who's going to need some time before welcoming him back as the show's host. "I'm going to need that time and space and compassion that he referenced to really accept the apology," former Bachelorette Rachel Lindsay told Extra on Feb. 15. "I'm not saying I can't get there. It's just, initially, it's a little tough for me."