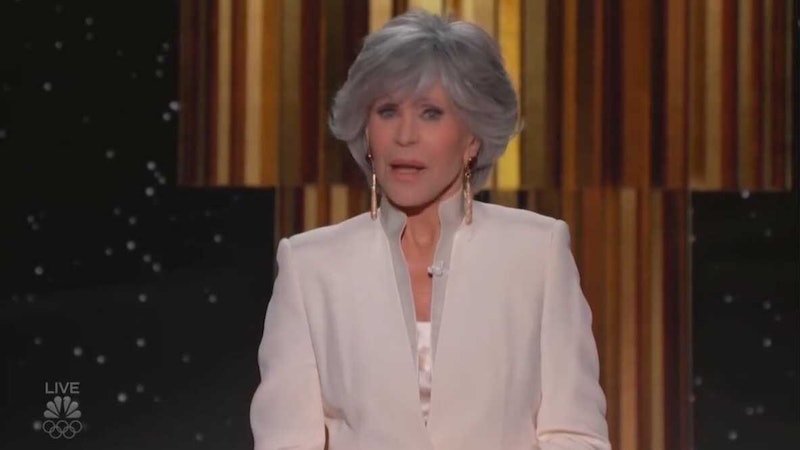 During the telecast of the 2021 Golden Globe awards, Jane Fonda gave a passionate speech about diversity upon receiving the Cecil B. DeMille Lifetime Achievement Award. In her acceptance speech, the political activist and actress mentioned all of movies and TV series either fronted or created by people of color, including HBO's critically-acclaimed I May Destroy You, which was snubbed by the Hollywood Foreign Press Association. To note, Fonda was the first to mention I May Destroy You during the telecast. The show is created and written by British-Ghanian actress and leading star Michaela Coel.

"Let's all of us make an effort to expand that tent so that everyone rises and everyone's story has a chance to be seen and heard," she stated virtually. Fonda went on to highlight the absence of Black voting members in the HFPA and the importance of diverse storytellers in Hollywood.

"Stories can change our hearts and minds. They can help us see each other in a new light, to have empathy, to recognize that, for all our diversity, we are humans first." She went on to add that groups like the HFPA "that decide who gets hired and what gets made and who wins awards" should "make an effort to expand that tent so everyone rises and everyone's story has a chance to be seen and heard." For Fonda, that responsibility extends to everyone who works in Hollywood.

And speaking of Coel's impact, Fonda expressed, "I May Destroy You has taught me to consider sexual violence in a whole new way." Fonda's entire acceptance speech can be found on The Los Angeles Times.)

Fonda later tweeted about her Cecil B. DeMille win, stating, "This means the world to me #GoldenGlobes2021," and included a picture of herself holding the trophy.