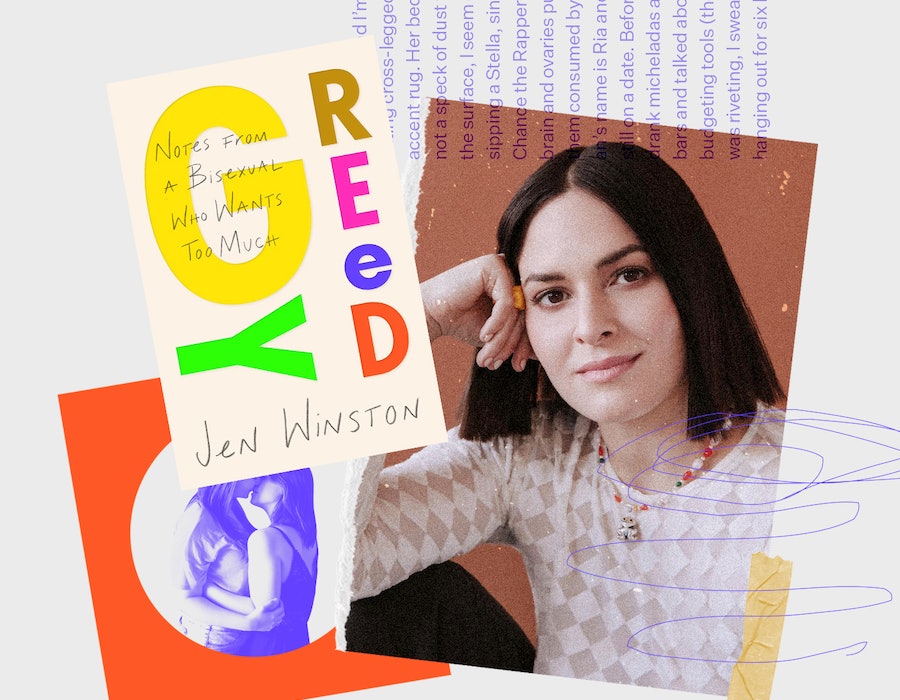 In this essay adapted from her new collection, Greedy: Notes from a Bisexual Who Wants Too Much, writer Jen Winston recalls the first time she was rejected by a woman.

It’s 1 a.m. and I’m slightly buzzed, sitting cross-legged on a woman’s accent rug. Her bedroom sparkles, not a speck of dust to be found. On the surface, I seem comfortable — I’m sipping a Stella, singing along to Chance the Rapper. But inside, my brain and ovaries pulsate, both of them consumed by fear.

The woman’s name is Ria and technically we’re still on a date. Before arriving here, we drank micheladas at three different bars and talked about our favorite budgeting tools (the conversation was riveting, I swear). We’ve been hanging out for six hours, so things must be going well. That’s logical, but it doesn’t calm me down.

It’s late. Sex is imminent. And I have no idea what to do.

It doesn’t help my nerves that Ria’s fucking hot. She’s hot in physicality (chiseled jawline, great boobs) but cool in energy (down-to-earth, a skater chick who has never been photographed without a beanie). She’s wearing overalls on a Sunday night and they look so good you’d think Vans paid her to style them.

But the thing about her that wrecks me most of all? She’s the first queer woman who seems to like me back.

Ria and I met months ago, before I came out as bi, at a rooftop happy hour. I gravitated toward her almost immediately — we made small talk about the internet days of yore (“Remember Harambe?”) and I was almost too enthralled to realize I had a crush. Camera bag slung over her shoulder, she said “duuuuude” with such conviction that I wondered if it was supposed to be pronounced like that. I didn’t know if she was queer (hell, I’d just started to believe that I was queer), but I did catch her eyes scanning me up and down, taking me in.

We didn’t exchange numbers — I wasn’t sure how to initiate that conversation, and to my dismay, she didn’t ask. But a few months later, we matched on a dating app and picked up where we’d left off. After two weeks of texting, I find myself here: sitting in a room that smells like a boutique hotel, mentally preparing for us to kiss.

Ria joins me on the floor, lights still on. She extends her arm to pass me a joint and I scoot toward her, hoping she can’t hear my heart pound. I feel sweat drip down the back of my neck, and gulp. it’s only a matter of time before she finds out that I’m Bad At Sex™.

I can’t say I’m not bummed. I worked hard to get good at so-called “straight” sex. I shed my gag reflex! I did my Kegels! But all that training is now for naught. My history with cis men has suddenly become irrelevant (much like cis men themselves, amirite?!). Today, I’m tasked with what seems like the impossible: Getting another cis woman off.

I tell myself it’s just a new chapter, and sometimes those are uncomfortable. I’ve never been bad with change before, but then again, I’ve never faced any obstacle without sexual confidence. My experience in the bedroom has been my armor, or at least my [semen-filled] security blanket — strip away everything and I’d still have my dignity, all because of that one time I gave head with an ice cube in my mouth.

My mind runs through the list of things I haven’t done: I haven’t scissored. I haven’t used a strap on. I haven’t made contact with many vaginas aside from my own. I’ve only touched other people’s during threesomes, which limited the potential for critical feedback — in the heat of a group-sex scenario, no one would dare call you out on less than perfect dexterity.

But at least threesomes made me feel comfortable — queer hookups seemed less intimidating when a guy was there too. Being alone with a woman raised other questions: What if I didn’t like the sex — would that prove I was straight? Or what if I liked it too much, and realized I didn’t need men at all? The latter question had followed me my whole life, cloaked in internalized homophobia — the possibility of falling in love with another gender felt like a threat to the person I knew myself to be. Though I knew I wasn’t a lesbian, queer sex taunted me like an ultimatum, as if hooking up without a cis dude around somehow meant no turning back.

Ria kisses me. She tastes like weed and spearmint Listerine, and her impressive personal hygiene serves as more proof that she’s out of my league. We stand up, and she finally turns off the overhead lights, leaving us with the flickering wick of a lone hinoki-scented candle. I swallow, hard. She removes her beanie, flinging it onto a dresser, and I perk up.

“Beanieless Ria? What a time to be alive.”

She smirks and pulls me toward her on the bed.

We fumble our way under the covers. She shimmies her overalls down to her waist, and I move one hand down her body. The lower I go, the more I sense impending doom — “Passengers, we’re approaching the altitude where your captain no longer understands basic human anatomy.” Navigating the angles is already awkward — I look like I’m grabbing a stuck bag of Combos out of a vending machine.

Only recently did I learn that all vaginas are unique (thank you for your service, sex-positive Instagram). Labia lips come in all shapes, colors, and lengths. Even clit locations vary from person to person. This should be obvious, but for a number of reasons (cough patriarchy cough), vaginal diversity had barely crossed my mind (aside from worrying that mine would never be tight enough, ofc). Still, because I have a vagina of my own, I’m ashamed that I don’t already know my way around. I could ask Ria what feels good, but what if that tips her off to how inexperienced I am?

I decide to wing it. Who knows — maybe I’m a natural, a pussy prodigy with an innate sense of direction? It’s wishful thinking, but alas — I’m the type who gets lost in a grocery store, and not even gay desperation can help me transcend my fate. I rotate my hand, trying to locate the point of entry — I’m like a toddler on their first tricycle, doomed to ride in circles until rescued by their mom.

I finally find my way in, but can hardly move my hand — the waistband on her overalls has clamped my forearm to her torso. Within seconds, the rest of my arm falls asleep.

Ria, ever-thoughtful, pulls out my hand and sets it aside.

“It’s fine,” she says, though I sense annoyance in her voice. “Let me show you.”

Her palm slides down my chest, easily finding its way to my waist. Only now do I remember.

Ria glares at me. Our eyes are less than an inch apart — I can feel her frustration. Truthfully, it hardly occurred to me that I should give her a heads up — being the modern progressive that I am (*goes to a farmer’s market once*), I don’t think period sex is a big deal. In the past I’ve actually enjoyed it, both for the additional lube and for the knowledge that someone is willing to “go there” with me — there’s a grotesque satisfaction in two adults acknowledging that menstruation is a natural part of life.

But for me, this moment is a first: I’ve never disclosed my period to someone who gets one too.

“Do you have a tampon in?” Ria rushes through the question. Her impatience is palpable. I’m an imposition, like an errand she just wants to “deal with” before she can fall asleep.

I nod, nervous about how she’ll react.

Before I can ask what that means, she dives her hand inside my pants, moving fast, like a scuba instructor running low on air. Within seconds she locates the bottom of the tampon, then presses up, sending it farther inside.

The next day she texts me.

Hey! Hope you got home ok. I had fun last night but I’m sure you agree that we should prob just be friends, lol.

I stare at my phone and blink. Nothing good ever followed a Hey-Exclamation-Point, and this is no exception. Though I know I feel embarrassed about the night at large, I’m not sure how I feel about her. But she wants to be friends and she’s sure I agree, so I guess that settles it. Matching her indifference, I type:

Hey! Yeah def lol, thanks for last night and for sending this text. Down to be friends for sure. Still honored that I got to see Ria without a beanie :)

I’m well aware that I’ve run this inside joke into the ground, but it’s the only one we have.

Twenty minutes later she responds with a thumbs-up and I decide to find the silver lining.

Getting rejected by a woman? Check.

Copyright © 2021 by Jen Winston. From GREEDY: Notes from a Bisexual Who Wants Too Much by Jen Winston. Reprinted by permission of Atria Books, a Division of Simon & Schuster, Inc.