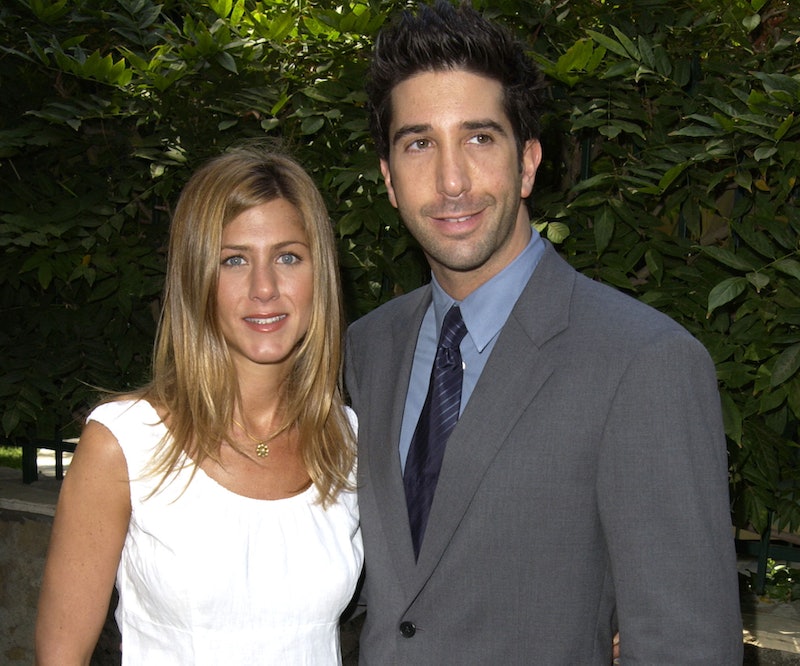 After declaring their love for one another and walking off happily into the sunset during the iconic Friends finale, it turns out actors Jennifer Aniston and David Schwimmer are still besties to this day. The duo — who brought on-again, off-again couple Rachel Green and Ross Geller to life during the sitcom’s 10-season run from 1994 to 2004 — shared a reunion, of sorts, on Instagram. And the surprise moment left Friends fans thrilled.

At first, all seemed like business as usual, with Aniston posting a teaser of her hair care brand Lolavie’s new products on the ’gram. Shot with a retro film effect, the photograph showed the actor sporting lathered hair as she posed under a plush shower. Referencing her new Restorative Shampoo and Conditioner duo, which has since been released, Aniston captioned the moment: “Something’s coming,” followed by a shower emoji.

This is where Schwimmer got involved, opting to mock up Aniston’s glamorous snap. The actor posed under a shower — looking significantly less at ease than his former co-star. With soap all over his face and torso, the star responded to Aniston’s caption with the words: “A towel, I hope?” Well played, Schwimmer.

Quick to respond, Aniston teased: “Schwim!? Trying to steal my thunder?” Unsurprisingly, scores of Friends fans also had their say in the comments, penning classic quotes from the hit sitcom. “He’s your lobster,” one viewer remarked. The quote comes from an iconic scene where Phoebe Buffay (Lisa Kudrow) urges Schwimmer’s character Ross to get back together with Rachel (Aniston) because they’re meant to be together; or as Phoebe puts it, “it’s a known fact that lobsters fall in love and mate for life.” (Spoiler: Marine biologists say otherwise, but still, a lovely sentiment.)

Unfortunately any fans hoping for a full-blown life-imitating-art romance between the two hilarious co-stars must remain disappointed for now. Though Aniston and Schwimmer both admitted to crushing on each other during 2021’s Friends reunion, they also clarified that their bond was strictly platonic.

“The beauty of that was that whatever feelings we had, we just literally channeled everything into Ross and Rachel, and I think that’s maybe why it resonated the way it did,” Aniston later told radio host Howard Stern. “But no, we never... on my life, and Courteney [Cox] and Lisa [Kudrow] would know and can vouch for me. I would proudly say I banged Schwimmer if that happened. But no.”

Taking the mick out of each other, meanwhile? Fair game.