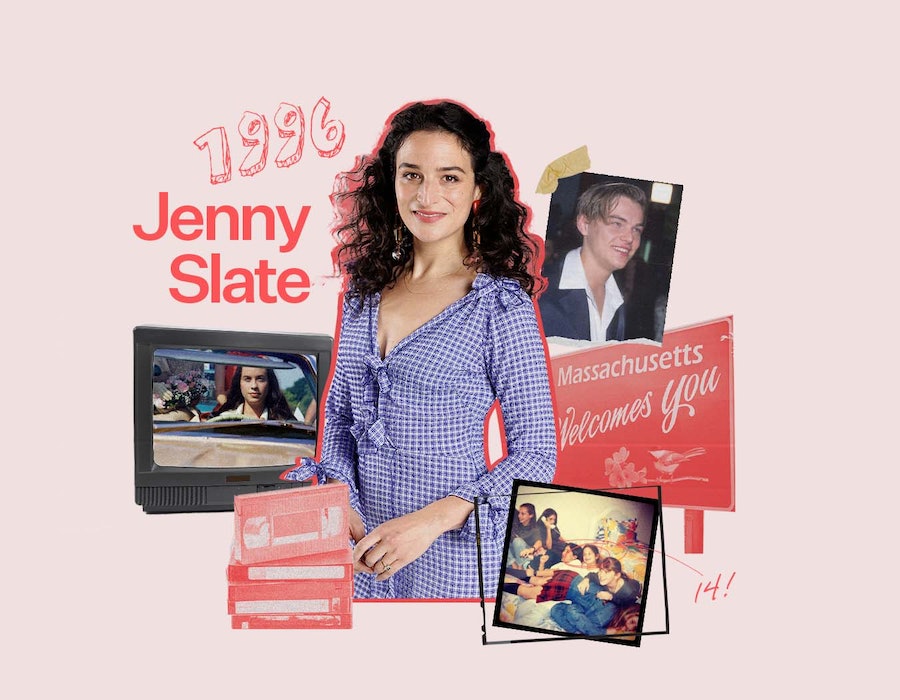 In this spinoff of Bustle’s 28 series, successful women describe exactly what their lives looked like at 14, and what their goals were for the future. Here, Jenny Slate revisits her adolescence in small-town Massachusetts.

When Jenny Slate was 14, she felt like she was in a holding pattern. “I just wasn't quite an adult yet, waiting for my period to arrive, that kind of stuff,” the actor and star of the newly released I Want You Back tells Bustle. She was poring over the Delia’s catalog in her childhood bedroom, which she’d decorated with Laura Ashley wallpaper and 27 pictures of Leonardo DiCaprio (yes, really). She was hanging out with her parents and renting Sister Act from Blockbuster for the umpteenth time. She was living in a haunted house.

Slate has spoken at length about her family’s home in the old, “New Englandy” town of Milton, Massachusetts, which the Slates fully believe they shared with ghosts — she referenced it in her 2019 Netflix special, Stage Fright, and even co-wrote a short story collection with her father, the poet Ron Slate, inspired by their ordeal — but it was her teenage self who was on the front lines of this paranormal incursion. “I was scared every night that I went to bed,” she says, “which is a crazy way to grow up.”

Perhaps Slate was stuck in a rut because she’d also been caught in whatever spectral field had kept the spirits from passing on, her development arrested by a malignant supernatural force. Or maybe she was just 14.

The horny, studious, socially awkward teen didn’t find school — an academically-minded, private institution, which her grandparents paid for — to be a happy place. It was just something to be survived, much like her ghostly roommates, or her family’s subpar VHS collection (Beethoven can only be watched so many times). But at summer camp, she glimpsed the future she would make for herself, with like-minded friends and plenty of time onstage. “That is the seed of what has grown into my whole life now,” Slate says, recalling how she took to performing. “I was just a little acrobat jumping off the highest thing and feeling there were no bones in my body. It didn't matter. I would learn how to fly midair.”

Later, Slate would leave to study at Columbia University in New York, and things would really start moving. She’d find her people. She’d join an improv group. She’d sleep without fear of ghosts. “Once I went to college and I came back and I was, ‘Oh, this again,’” she says of returning to her haunted home. But now, a grown-up college student, she had the confidence to do what she’d needed to all along: sleep with the lights on. “What am I going to do, not visit my parents?” Slate says. “I still went to sleep. It was fine.” Adolescence is scary, and then it ends.

Below, Slate discusses her pubescent hormones, her love of Alanis Morissette, and how her 14-year-old self would feel about her now.

At 14 years old, I think that the Alanis Morissette album Jagged Little Pill had recently come out, and it was very, very important to me. It was a year after [the] Green Day [album Insomniac], like that grungy moment. And I was in that vibe.

I had a really hard time in school. Did not have a happy time going to school, for sure. Socially [it] was really, really difficult. And even now that I am about to turn 40, I still look back on that time as one of the most painful times. And I think that's really real. If people are 14 and they're feeling that, that is actually probably the right size of the feeling.

But I also remember it was the first time that I got really into my own personal style. I had always really liked dressing, but it was more like I would dress up for temple or something. Whereas, I became aware of having style as a daily thing that you can be a part of.

Was this peak hormone for you?

What did your version of “hanging out” look like?

I hung out with my parents.

Yeah. I did have a group of four friends in school, but we didn't really do a lot of hanging out outside of school. I was really hanging out with my parents and my sisters and my grandparents. The internet wasn't there yet. We didn't have cable TV. It was a lot of family gathering and talking and maybe renting a video from the library or Blockbuster if we were lucky. And we were not often lucky.

Were you doing speech team at this time? I know you were nationally ranked in high school.

No, not yet. I didn't do speech team until high school, so I hadn't really found that outlet yet either.

That's probably part of why you were having a hard time. You hadn't found your groove.

Yeah. I think it's hard when you haven't found your groove and then socially you're being told that you don't have a lot of worth, or that you're even a magnet for being a target. I think that can be really confusing. Because if you're like me and you are born with a love of something — I had a love of performing and a feeling that whatever was in the spirit of the actors in the films that I watched, that that was in me. And I think people are like that. Sometimes you just know when someone else is your same kind of creature or you're just like, "Oh, I belong in that herd." And that's a beautiful feeling and it's really precious. And I think it's really heartbreaking if your peers act in a way that says you must be wrong about yourself, because of course that's not true. You are the only one who knows what you're really like.

I think if I could talk to myself back then I would say, "It really honestly does not matter if you are the most sought after person in this class." But at the time, I guess I just wanted that. I just wanted to be the pretty girl who was good at sports and not the funny girl with braces and too many pubes or whatever. Not that anyone was seeing my pubes.

But you’re fully aware of them.

Oh yeah. It's so annoying when you have more pubes than you have boobs. You're just like, "Why did that ratio happen? I would love a fuller rack."

What were you imagining for your future at 14?

It was like, I really, really want to be a film actor. I just want to be a film actor. I don't need to be the most famous person in the world, but I want to be in movies and TV. I had no plan for how to become that. I'm from a small town in Massachusetts and I didn't know anyone in the entertainment industry, but I loved performing. And I will say, I just followed the tiniest steps. Find a performance, find a place to perform. Just keep trying to find it rather than, how can I appeal to some random producer character that I've made up in my head when I don't even know what a producer is. I really still am often stunned that this is what I get to do and that I'm still myself. I've said this a million times because I let the wish be as full as I felt it. But I think if I had tried to actually figure out how to do it, been rational about it, I might have stopped myself.

What would your 14-year-old self think of you if she got to meet you today?

I think she'd be really, really excited, because in a lot of ways, I am living what I wished for plus things that I never ever thought would occur. And I think I grew up around so much, like most of us did, so much culturally normalized misogyny that I didn't ever think that I could be as satisfied as I am without also letting the beast of misogyny eat me. I think I'm way more free than I ever thought that I could be. And that includes being in partnership with my husband, who's such a beautiful person, and having our baby. I didn't really think that I could be sitting here doing press for a really large movie and being the female lead of that movie while also having had just had a baby.

I made I Want You Back when I was 10 weeks postpartum. That is intense and I was breastfeeding or pumping every three hours. And if you told me that as a kid that I would be doing that, I think I almost would've thought that I was somehow in trouble. There just wasn't a lot of room in the perspective that I came up in, which is one's fault. It was in my family or whatever, but it's culture's fault, their insistence on these terrible, terrible caricatures that women are supposed to squeeze themselves into. I just didn't think that anybody would care for me as much as, when I got to set, I was deeply cared for by my co-stars and our crew and my assistant. I had never had an assistant before on the movie and they gave me one and her name was Haley, who also had just had a baby. And so she knew how to do the breast pump and everything. And she carried my pump and my milk around. And it was incredible.

Even if you didn't have the words for it, was that something that you were feeling as a teenager, the force of those societal expectations?

For sure. And what that looked like to me was an involuntary but persistent criticism of my body; a fixation on what other people thought about whether or not I as a teenager was a sexually viable person without any concern for being powerful and thinking that if I were powerful, it would most likely be because I was anointed with that power by a more important person. And those beliefs are brutal. And I held them with me for much longer than I wish I had. And if I could go back and do anything, give my younger self anything, I would expose her to feminist scholars. I would implant in her spirit, a feminist belief system. And I would say, these are the actual real laws and values that will help you be happy, because that's what I believe.

More like this
At 14, Melissa Barrera Was Planning Her Quinceañera & Falling In Love With Musical Theater
By Gabrielle Bondi
At 14, Rachel Sennott Had A Sexual Awakening While Reading 'Twilight'
By Samantha Leach
How Director Quinn Shephard Turned Dylan O’Brien Into A “Viral Weed Blogger”
By Samantha Leach
Christina Perri Had No Idea Her 'Twilight' Song Is On YouTube's Top 100 Chart
By Radhika Menon
Get Even More From Bustle — Sign Up For The Newsletter