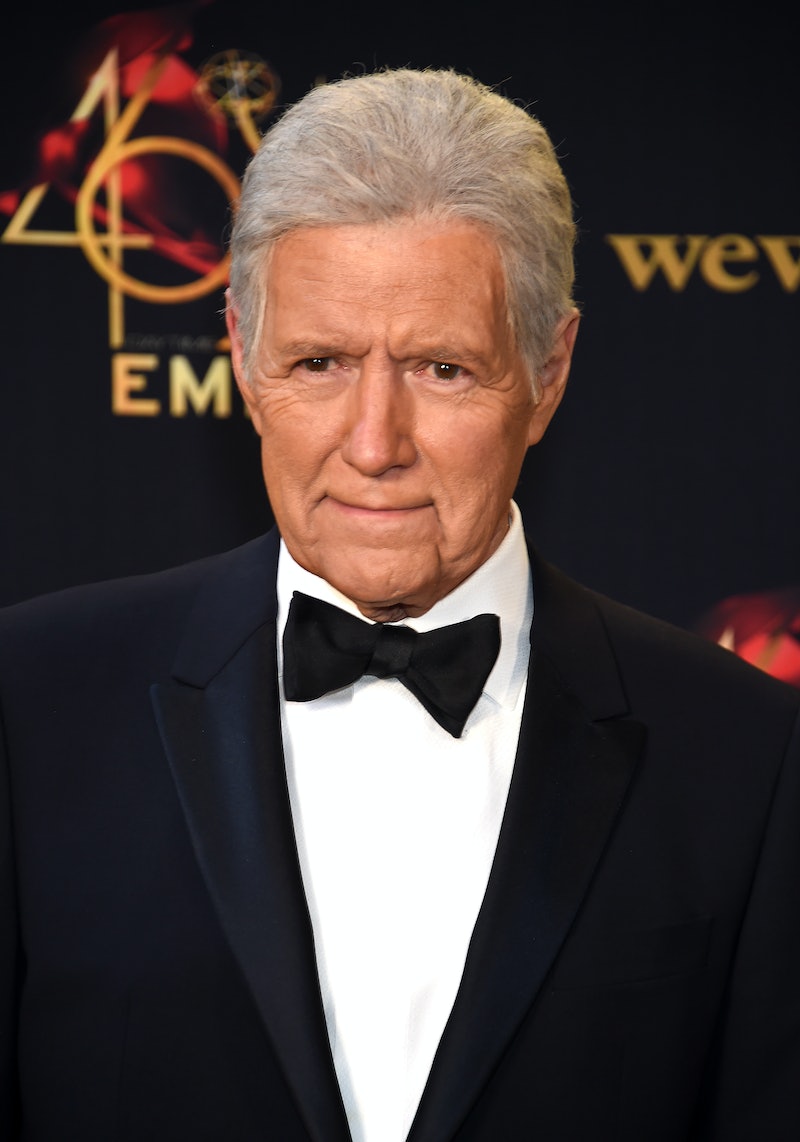 One of the most beloved figures in American television, Jeopardy! host Alex Trebek, has died at age 80, following a battle with pancreatic cancer. Trebek helmed Jeopardy! from its premiere in 1984. The host became one of the most revered figures in TV history over his 36-year tenure on the popular quiz show.

On Sunday, the Jeopardy! account announced the loss on Twitter, writing: "Alex Trebek passed away peacefully at home early this morning, surrounded by family and friends. Thank you, Alex."

The cause of death was not immediately announced. In March 2019, Trebek announced he'd been diagnosed with stage 4 pancreatic cancer, and received an immediate show of love and support from friends and fans, as per CNN. Trebek's passing is being met with the same outpouring of love from fans and viewers online, many of whom have come to know him as a calming presence over his decades-long stint on Jeopardy!.

Trebek, who was born in Ontario, Canada, began his television career covering national news and special events for the CBC, per his official Jeopardy biography. In 1973, he became the host of NBC's Wizard of Odds, marking his first appearance on television in the United States. The TV star tackled several other hosting gigs before ultimately finding success on Jeopardy!. The quiz show has won more than 35 Emmy Awards, more than any other game show in history, per The New York Times.

The Jeopardy! star inspired fans with his no-nonsense approach to hosting, emphasizing the content of the show instead of his own presence, per The New York Times. "You have to set your ego aside,” he said. "If you want to be a good host, you have to figure out a way to get the contestants to — as in the old television commercial about the military — ‘be all you can be.’" Trebek has expressed his desire for Jeopardy! to continue following his death. The producers noted that new episodes of the game show will continue to air with Trebek as host until Dec. 25, but a replacement has not yet been selected.

In addition to his reassuring Jeopardy! presence, Trebek is revered for his kind and honest character. Ken Jennings, a contestant who scored 74-straight victories and set a Jeopardy! record, posted a memory from his time on the show on Twitter.

"Alex wasn’t just the best ever at what he did," Jennings wrote. "He was also a lovely and deeply decent man, and I’m grateful for every minute I got to spend with him." In another tweet, he added, "Thinking today about his family and his Jeopardy! family—which, in a way, included millions of us."

Many fans also came to appreciate Trebek's candid accounts of his cancer diagnosis, which he documented in his memoir The Answer Is..., per USA Today. While the host admitted to having "unpredicted surges of depression or just debilitating moments of agony, weakness," he ultimately made peace with the diagnosis. "I understand that death is part of life," he said. "And I've lived a long life."

More like this
Every ‘RuPaul’s Secret Celebrity Drag Race’ Contestant’s Identity Has Been Revealed
By Brad Witter
Jonathan Bailey’s BTS ‘Bridgerton’ Photos Celebrate 6 Months Of “Kanthony”
By Stephanie Topacio Long
Everything To Know About Taylor Swift’s 10th Studio Album, 'Midnights'
By Grace Wehniainen and Jake Viswanath
Confusion Reigns After Kanye Changes His Instagram Profile Pic To Kris Jenner
By Jake Viswanath
Get Even More From Bustle — Sign Up For The Newsletter