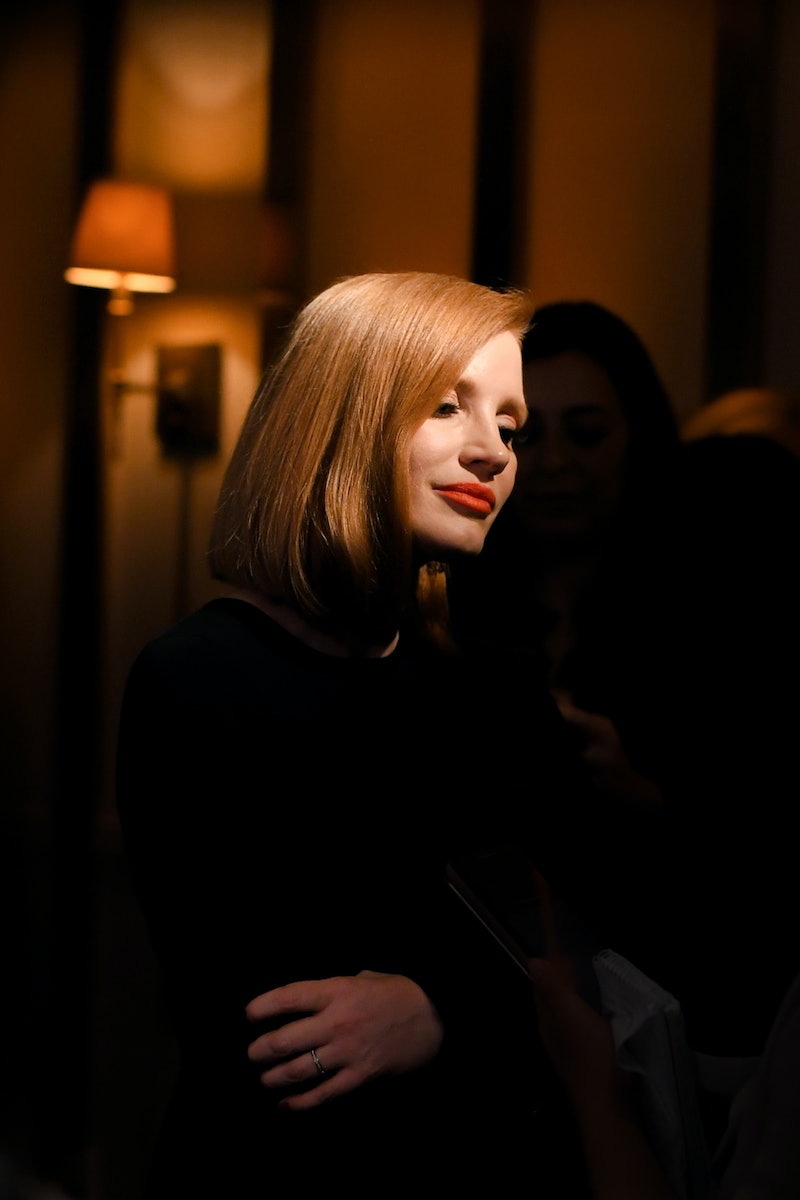 Jessica Chastain knows the power of the media well. As a movie star, her name has been in headlines for over a decade, leaving a trail of print tracing — and often abetting — her rise from up-and-comer to decorated actor to Hollywood power player. Largely, she’s stayed on its good side, earning kudos for speaking out against wage inequality and sexual harassment in her industry, and acclaim for her roles in Oscar-winning films.

Tammy Faye Bakker, the televangelist whom Chastain portrays in her latest film, The Eyes of Tammy Faye, had a different experience. When her husband, Jim Bakker, was held accountable for his crimes in the late ’80s — in the court of public opinion for alleged sexual assault, and in a court of law for fraud and conspiracy — Tammy Faye was also torn off her pedestal along with him, eyelashes first. Her heavy makeup and personal style were lampooned, and her perceived greed and hypocrisy chastised, as Saturday Night Live and its ilk rushed to pile on.

Chastain’s movie, which the actor also produced through her production company Freckle Films, is an attempt to rehabilitate the late PTL Club host. When she began telling people about the movie after first getting the rights to the story in 2010, Chastain was shocked to learn what mental images of Tammy had endured. “People would always respond like, ‘Oh, she’s a crook, she’s this, she’s that’ ... Even the mascara running down her face. In all of my research, I could not find one image of Tammy Faye with makeup running down her face. I found images of comedians making fun of her and doing satire of Tammy with that happening,” the actor tells Bustle. “And then I realized how important media is, because we all have a collective memory of something that I don’t believe ever happened.”

Reexamining how people — particularly women — have been treated by the press has become something of a national pastime. From the collective guilt that drives much of the #FreeBritney movement to the revisionist histories of I, Tonya and Lorena, Americans are slowly coming to terms with the truth behind the tabloids. It’s a neat solution: fight media with media. Chastain considers The Eyes of Tammy Faye to be a part of this; she hopes audiences will come away impressed by how Tammy Faye supported those with HIV/AIDS, not further transfixed on her heavily-lined lips.

In the years since Tammy Faye’s downfall, not only has the media grown more introspective, but its subjects have grown savvier — and, thanks to social media, free to shape their images on their own terms. A viral clip of Oscar Isaac caressing Chastain’s arm did more to advertise the pair’s upcoming limited series, Scenes from a Marriage, than any standard interview could have. And even when she does sit down to talk with the press, Chastain says she’s learned how to assume “the agency and the power” to direct the conversation where she wants it to go. She’ll write her own story the first time around — no revisionist history needed.

Below, Chastain talks to Bustle about women in the public eye, the nature of being on camera, and all that Tammy Faye mascara.

So my first question after watching the movie is, could you even see through those lashes?

Yes. I had read a lot of her books and everything and there's a great video of her on YouTube. She basically said that she never took them off even at night, so she just kept adding them on. So that's kind of what we — I definitely took the makeup off at night, obviously, with all the prosthetics and everything — but we had [makeup artist] Linda Dowds create these amazing lashes that she just kept layering more and more gunk onto. And that's what gave the look.

It is clear from the movie that she took a lot of pride in her appearance, and it's sad to see people make fun of it. Which I realize I just did.

Yeah. It's upsetting for me that people cared more about how much mascara she was wearing than what she was actually doing. And I think it's the same conversation about, How many pantsuits is this person wearing? For women, we tend to focus on how a woman decides to present herself to the world rather than what she actually says or does. And that is very upsetting to me.

I can respond in terms of acting and say that, there’s a beautiful thing Al Pacino taught me. He directed my very first film. He said, the camera is an extension of who you are in cinema. So more than a person, a camera can see into your eyes, into your soul, it becomes part of you. And it can see deeper into you than even another human being can because especially in cinema, it blows something up, enlarges something. You can say one thing, but feel something else. And the camera notices it. It's like a microscope. And so that's what I love about film acting is this sense of not being able to hide. And to me, it feels like there’s a connection then with an audience.

You have a reputation for speaking your mind in interviews and you're fairly active in social media. Do you have ever have trouble deciding what to share and not share with the public?

I don't think when I'm talking like, “Oh, there's the headline.” A lot of actor friends that I have always say when they're giving an interview, they know immediately when they say something like, “Oh no, that's what they're going to latch onto.” I'm kind of more free than that.

Lately, I have been aware, in terms of politically speaking — I'm super happy to amplify the voices of others that have been ignored. But I started to realize that I was getting undue attention for saying and for supporting causes that are important just because I’m a white woman. And for me, I found that to be really uncomfortable that the conversation was shifting from where it needed to be, and the people that we all needed to listen to. So I’ve started to kind of — I amplify things, but I'm not super interested in having a conversation about an aspect of politics or society that really we need to be listening to someone else for.

I know that you’re asked a lot to speak about political issues, and you’d like to redirect that attention, but is there something that you aren’t often asked about that you wish you were given more opportunity to talk about?

You know what? I'm realizing in a lot of interviews that I give, I tend to always circle back to the things that I want to discuss. So I do feel active as the interviewee, like it's a more of a conversation than a straightforward Q&A, where I'm just yes or no answers or whatever. I feel more like it's a conversation, and so because of that, it gives me the agency and the power to direct things in places that I want to go.

Did it take you time to figure out how to do that?

It did actually. And it's something I'm still learning, and the reality is I think a lot of women in general have been raised to be people pleasers, and to take care of things and not to — you don't want to ever disappoint. And it's taken me a moment to get to the place [where having] a boundary isn't a bad thing.

And especially through this pandemic that we've all struggled with, there's been so much learning in the past year and a half. It really helped me move through a sense of like, I can't worry what others think. And when you worry what others think, you're not really being an honest person. You're not really being alive, you're kind of faking who you are. And so in some sense, that was a gift that was given to me — to just want to be 100% fully present and not worry about another person's disappointment or if I don't want to share certain things about my life or whatnot, because the reality is I can't control another person's feelings. And that’s been a big lesson for me, and a great gift.