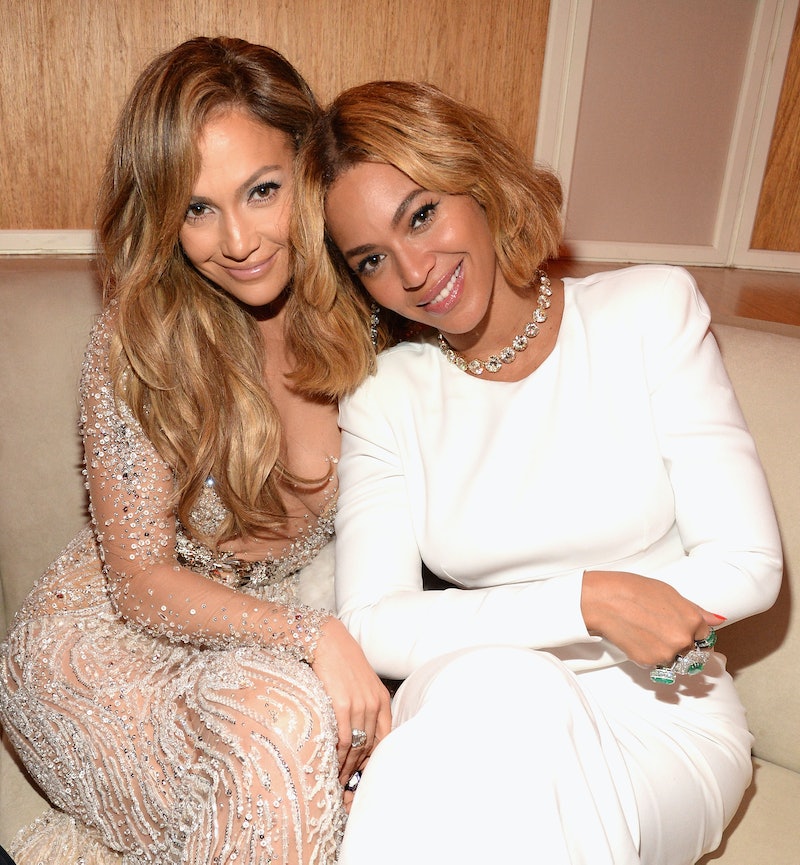 Beyoncé didn't attend the 2020 American Music Awards on Sunday, Nov. 22, but some fans still felt her presence. According to multiple Twitter users, Jennifer Lopez's AMAs performance gave off major Beyoncé vibes, from the outfit and hair down to the props. And when the music icon hit the stage with Latin singer Maluma to perform a medley of their songs "Pa' Ti" and "Lonely," fans quickly noticed some strong visual similarities to Beyoncé's 2014 Grammys performance of "Drunk in Love" with husband Jay-Z.

During the performance, J.Lo donned a black catsuit with sheer cutouts and sported a short and wet hairstyle, which she debuted on the red carpet a few hours prior. The look immediately reminded fans of Queen Bey's ensemble at the 2014 Grammys. During the performance, J.Lo also danced around a chair while being shrouded in muted colorful lighting, which fans noted was a primary part of Bey's routine as well.

However, unlike the "Crazy in Love" singer, J.Lo seems to have taken some inspiration from "Cell Block Tango," one of the famous numbers from the Oscar-winning musical Chicago. Dancers performed a routine behind jail cell bars before joining the singer for a cabaret-style take on the chair choreography.

Despite some notable differences in their performances, the similarities were significant enough for fans to notice. "Not JLo dressed the exact same way as Beyoncé did for her 'Drunk in Love' performance at the Grammys," one Twitter user wrote. "Even down to the wet hair and the chair." Some fans wondered if the references were intentional and J.Lo was paying tribute to the Grammy-winning artist.

Despite the comparisons, many people on Twitter came to J.Lo's defense, saying that the singer has done similar choreography "since the early 2000s" and has often taken inspiration from classic films.

Neither J.Lo nor Beyoncé have commented on the speculation, but it seems that everyone can agree on at least one thing: both of their performances were fire.

More like this
Beyoncé’s Special Tribute To Sister Solange Was Both Touching & Hilarious
By Stephanie Topacio Long
Everything To Know About Taylor Swift’s 10th Studio Album, 'Midnights'
By Grace Wehniainen and Jake Viswanath
How Ghosts Inspired Kesha’s New Music
By Jake Viswanath
Lizzo Twerks While Playing James Madison's 200-Year-Old Crystal Flute Onstage
By Radhika Menon
Get Even More From Bustle — Sign Up For The Newsletter