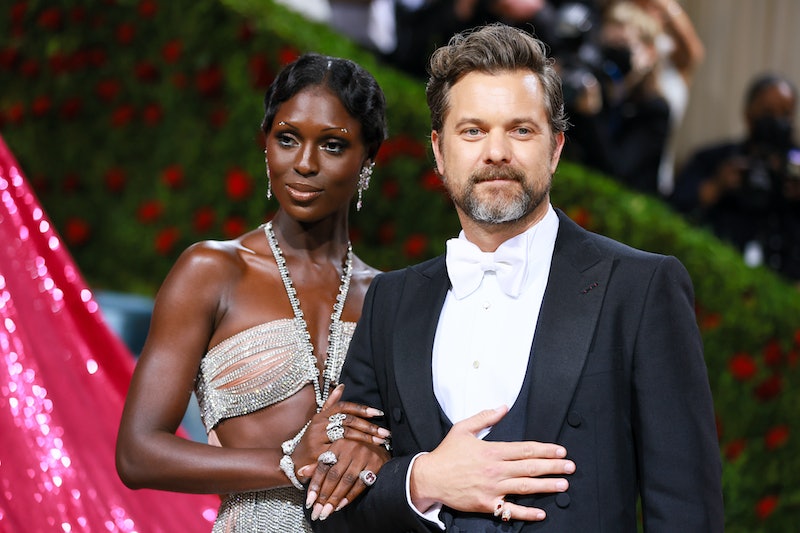 Pacey Witter has finally settled down — in real life, that is. Rumors started swirling that Joshua Jackson and Jodie Turner-Smith were dating in October 2018, after they were spotted in public multiple times, often holding hands. From there, the Dawson’s Creek alum and White Noise star trotted the globe together, proposed (she asked him), got married, and welcomed their first child, all in the span of a year-and-a-half. Talk about a whirlwind romance.

Throughout it all, they rarely said a word about their relationship to the public, even to confirm their marriage after wearing wedding rings on the red carpet. Now, that’s totally changed. Turner-Smith and Jackson’s relationship timeline proves that they moved faster than most couples, but their love runs deep. And while they were extremely private as they celebrated big milestones, the couple now can’t stop gushing about each other every chance they get.

Here’s what we know about their relationship and their daughter, Janie.

In what might be the best “how we met” story ever, Jackson and Turner-Smith reportedly hit it off at Usher’s 40th birthday bash in October 2018. “They were all over each other,” a source told Us Weekly at the time. “Super smitten and gazing into each other’s eyes as they danced together their whole night.” “Yeah!” has been bringing people together since 2004, so Usher playing unintentional matchmaker isn’t a huge surprise.

December 2018: The Couple Spends The New Year Together

While they hadn’t acknowledged the dating speculation yet, Jackson and Turner-Smith posted photos from Nicaragua on Instagram that show the exact same coastline and pool area, proving they were on a New Year’s Eve trip together. Turner-Smith posted bikini photos from the luxe setting and used the caption to share that 2019 had gotten off to a special start. “2019,” she wrote. “Already something out of my wildest dream.” Later, Jackson would reveal the reason why.

August 2019: They Get A Marriage License

Although the pair had still yet to confirm their relationship publicly by August 2019, the major step they took did all the talking for them. On Aug. 2, Jackson and Turner-Smith obtained a marriage license at a Beverly Hills courthouse. It’s not known whether the couple held a secret wedding ceremony at a later date, or simply got married at the courthouse, but either way, they were ready to become husband and wife less than a year after meeting.

Later that month, the couple finally became Instagram official after Turner-Smith posted a photo of the couple lovingly gazing at each other during a romantic evening in Rhode Island. “Two people who only fancy each other a little bit,” she wrote. The actor also did that thing where she filmed Jackson sleeping and shared the video on her Instagram story, which is adorable yet weird.

Jackson and Turner-Smith made their first public appearance together at the premiere of her movie Queen & Slim, but they weren’t the true stars of the show. The couple showed off dazzling wedding rings on the red carpet, without confirming their marriage or engagement to reporters. You know what they say: Diamonds speak a thousand words.

In December, Us Weekly reported that Jackson and Turner-Smith were expecting their first child together just days after reporting that they had secretly tied the knot sometime before then. The couple didn’t comment on either rumor, but in a January interview with the Sunday Times, Turner-Smith strongly hinted that she was indeed married to Jackson while also playing off the reports. “I haven’t said to anybody, ‘Yeah, we got married,’” she said, per Elle. “People are assuming whatever they want, but when people tell me ‘Congratulations,’ I say, ‘Thank you.’”

However, she did confirm that they were “obsessed” with each other, to the extent that Turner-Smith said she watches Jackson’s movies and, of course, Dawson’s Creek, when they’re apart because she “[misses] him so much.” In fact, in a separate interview with W Magazine, she revealed that Jackson was actually her first crush — or rather, the character that made him a star. “It was Pacey from Dawson’s Creek!” she said. “I was a very young teenager. And now we are a couple.” If this isn’t proof that manifestation works, then what is?

Turner-Smith used her second Valentine’s Day with Jackson to both honor her now-husband and subtly confirm her pregnancy. On Feb. 14, the actor shared an Instagram slideshow of memories with her beau, including a video of Jackson rubbing her baby bump. “Our 2nd valentine’s day and it’s even more magical than the first!” she captioned the post. “Here’s to a lifetime of them. happy valentine’s day to the man who sees my soul and holds my heart. love you, baby daddy.”

Later that month, Turner-Smith’s baby bump made its own red carpet debut when she attended the 2019 BAFTA Awards in London, showing off her growing belly in a flowing yellow gown designed by Gucci. “I’ve never felt more beautiful,” she wrote on Instagram, sharing a photo from the red carpet. “I will never ever forget this moment, and I look forward to showing this to my baby angel years from now.”

April 2020: They Welcome Their First Child

On April 21, Jackson and Turner-Smith welcomed their first child together and confirmed it to People without revealing details about the baby. “Both mother and baby are happy and healthy,” their reps said at the time.

May 2020: The Couple Celebrates Their First Mother’s Day

Just a few weeks after giving birth, Turner-Smith celebrated her first Mother’s Day. Jackson marked the occasion on Instagram by paying tribute to his wife and thanking her for making him a father, subtly revealing that their baby was a girl. “Dear Jodie, On this most special of mothers days I want to thank you for the being the light that you are,” he wrote. “For the passion with which you threw yourself into nurturing and protecting our child when she was in your womb. For the dedication and will you showed bringing her into the world. I have never witnessed a more powerful being than you through those moments.”

On Sept. 7, 2020, Jackson commemorated Turner-Smith’s 34th birthday on Instagram, sharing a photo of his wife by the ocean and opening up about their “whirlwind” journey. “Happy Birthday my beautiful wife,” he captioned the post. “Thank you for choosing to share your light with me. Thank you for walking this path of life as my wife. Thank you for bringing our daughter into the world. This last year has been the happiest whirlwind of my life. I can’t wait to see what all the years to come bring our way. Love, Josh.”

April 2021: Turner-Smith Opens Up About Marriage

Over a year after tying the knot, Turner-Smith opened up about married life with Jackson in an interview with People, saying they “high-five all the time” to celebrate how they chose each other. “I think it’s really beautiful to be with someone who is so supportive and so loving,” she said. “We’re so similar in so many ways. We’re like mirrors for each other. And I just really love that human being.” The star also explained the upsides of marriage to a fellow actor. “He has a wealth of experience to offer and advice to offer,” she said. “I just love picking his brain about things.”

During an appearance on Late Night with Seth Meyers, Turner-Smith confirmed that she met Jackson at a party (without referencing Usher) and said she initially played hard to get. “First of all, I saw him before he saw me, and when I saw him, I was like, ‘I want that,’” she explained. “And then when he saw me, I just pretended like I didn’t see him.”

Jackson had to yell out for her using the Sorry to Bother You T-shirt she was wearing. “He comes over and does this really cute, charming thing that he does and... he just basically followed me around the party.” That eventually led to a “one-night stand,” and Turner-Smith didn’t expect anything more. “We’re in a two-, three-year one-night stand now,” she joked.

July 2021: Jackson Explains How She Proposed

In a July interview on The Tonight Show Starring Jimmy Fallon, Jackson told the story of his engagement to Turner-Smith, revealing that she proposed to him on that fateful New Year’s trip, just two months after they met. “I knew the moment she asked me,” he said. “She asked me on New Year’s Eve. We were in Nicaragua — it was very beautiful, incredibly romantic, we were walking down the beach, and she asked me to marry her.” No wonder she wrote that 2019 was already special.

Jackson went on to explain that he didn’t expect the proposal, but has no regrets about saying yes to her. “There was a lead-up to it,” he said. “I did not know [it was coming], but she was quite adamant, and she was right. This is the best choice I ever made.” Women know best.

March 2022: An Update On Their Daughter

During the Critics Choice Awards red carpet, the couple shared a sweet update about their daughter, whose name is Janie. “She's talking! So when we were leaving to come down here today, she was like, ‘I come work? I come too? I come too,’” Jackson told Entertainment Tonight, adding: “[Being an] actress is gonna be too small for her. She's gonna rule the world.”

Turner gushed about his wife’s attire at the 2022 Met Gala, and also poked fun at his coattails. “I’ve never worn tails in my life,” Turner told The New York Times about his Met Gala ensemble. “So it feels, in the proper way that a costume ball should, like I’m actually putting on a costume. But also I just look really good. It’s hard to keep up — you really got to keep it together when you’re standing next to her.”

“I love seeing him dress up,” Turner-Smith gushed in response. “He looks damn good in a suit.”

Turner-Smith and Jackson told Forbes about their relationship, and Turner-Smith revealed how he supports her and their daughter. “When I met Josh and one of the biggest reasons why I married him, wanted him to be my husband, is because of how loved and supported I felt by him. I had never been with anyone who I thought was wanting to lift me up the way that I felt that he was lifting me up. That is one of my favorite things about him.”

Adding: “It has been so magical to just see him be a dad. I mean, I can't think of a person in the world who doesn't have some form of ‘daddy issues,’ so when you see someone fathering in this really beautiful way and think to yourself Wow, I'm actually setting my daughter up for such a beautiful life because look at this wonderful relationship that she has with her father and is going to have and that really gives me a lot of comfort.”

More like this
Hilary Duff's Husband Matthew Koma Has Her Name Tattooed On His Butt
By Jake Viswanath and Stephanie Downs
Vanessa Hudgens Is Reportedly Engaged To Cole Tucker
By Jake Viswanath
Pamela Anderson’s Dating & Marriage History Could Be Its Own TV Series
By Jake Viswanath
Keke Palmer Shares The Sex Of Her & Darius Jackson's Baby
By Jake Viswanath
Get Even More From Bustle — Sign Up For The Newsletter
From hair trends to relationship advice, our daily newsletter has everything you need to sound like a person who’s on TikTok, even if you aren’t.

This article was originally published on Aug. 17, 2021