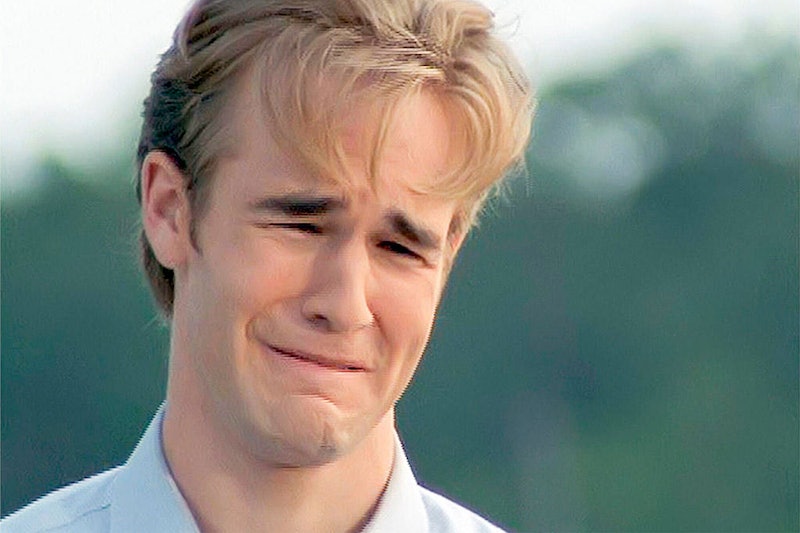 We finally know where the characters of Dawson's Creek's would be now. During an interview with Entertainment Weekly, series creator Kevin Williamson shared his thoughts about what's happened to Dawson, Joey, and Pacey in the two decades since the show aired. And to the chagrin of many fans, it's not all smooth sailing.

If you'll recall, the final shot of Dawson's Creek shows Joey and Pacey watching Dawson's new show, which gets him a meeting with his favorite director, Steven Spielberg. But Williamson said that because he's "man of conflict," the characters wouldn't have just lived happily ever after. "I think Dawson became Spielberg, all his dreams came true," but then those dreams were "shattered," Williamson explained. "I think he fell apart. I think he never really found love and, when we come upon him, he’s just on the cusp of changing his whole life and finding the one thing that’s going to make it magical." Cue everyone ugly-crying just like Dawson on the dock.

Williamson also didn't have a very happy prediction for Joey and Pacey's relationship. Though he thinks they got married and had a family, he added that "there were troubles" between them. "I think they got a divorce. I think that when we meet them they’re in a very dark place," he said.

However, he thinks there’s "still something between them that forces them to come together and raise their children." He added,

"As they seek out happiness with others, they just keep coming back to each other. And they just can’t stop that magical thing that exists between them and that bond they have. I think we would sort of have to watch them fall in love all over again as middle-aged adults.”

This is sort of surprising given that Williamson previously admitted he'd much rather have seen Joey and Dawson end up together. "It's hard for me to express that but I am Team Dawson," he told The Hollywood Reporter in January. "Even though I wrote it the other way, 100%, if you asked me, I'm Team Dawson." His reason? He thinks that the two were true soulmates.

"The way that I see it, Dawson and Joey ended up together," he said at the time. "They're soul mates forever. And they have that deep bond of friendship that will never, ever go away. But," and this is important, Joey's "romantic love for Pacey was who she wanted to be with and share her life with. And in a weird way they're all soul mates."

For the record: James Van Der Beek, who starred as Dawson is Team Pacey. “It felt right to me,” he told EW in a separate interview. “It seemed like it made more sense.” Joshua Jackson agreed that Pacey was the right choice: “Of course I did! My vanity knows no bounds.” And Katie Holmes...well, she's happy to stay out of the whole thing. "I’m glad that Kevin had to make the decision and we didn’t,” she said.

More like this
Netflix Reveals First Look At Wednesday In The 'Addams Family' Spinoff Series
By Bustle Editors
A New 'And Just Like That' Table Read Pic Confirms A Key Character's Return
By Jack Irvin and Grace Wehniainen
24 Years Ago, 'Friends' Dropped Its Most Underrated Ross & Rachel Episode
By Grace Wehniainen
The 'Skins' Cast Shared The Reunion We’ve Been Waiting For
By Sophie McEvoy
Get Even More From Bustle — Sign Up For The Newsletter

This article was originally published on March 29, 2018