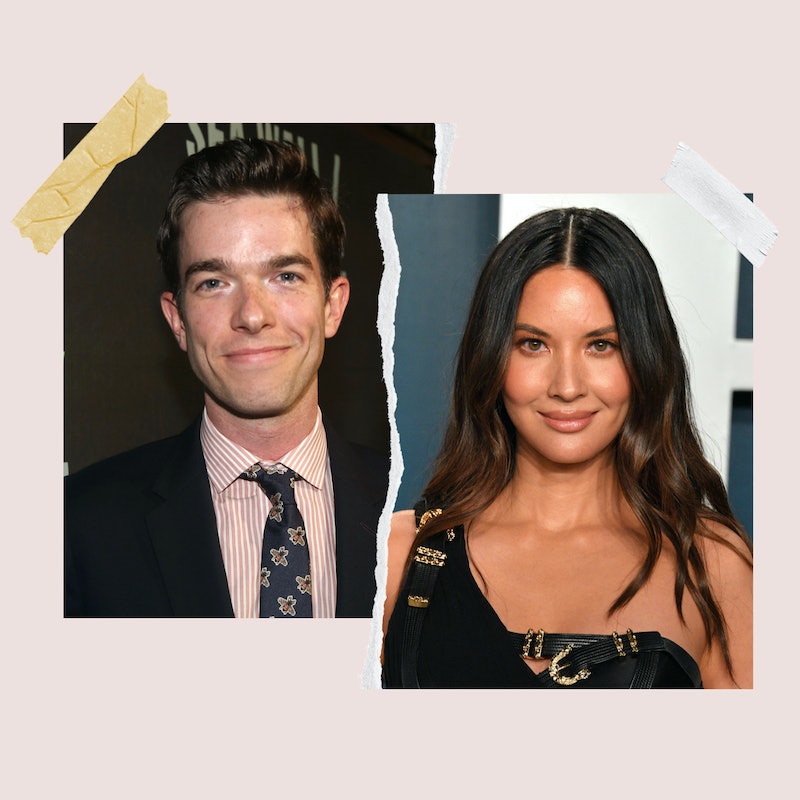 Comedian John Mulaney has had a hectic couple of years. In September 2020, the Saturday Night Live star checked into rehab for one month following a drug relapse. After relapsing again a few months later, his friends, including Late Night host Seth Meyers, staged an intervention that caused Mulaney to check back into a treatment facility for two more months. At the time, many stars tweeted their support for Mulaney, including his current girlfriend Olivia Munn.

Although Munn and Mulaney’s relationship is moving quickly, it’s still very new. After Mulaney left rehab in February 2021 and continued treatment as an outpatient, the news surfaced in May that he and wife Anna Marie Tendler were divorcing after six years of marriage. Their split ultimately opened the door for the comedian’s romance with the Love Wedding Repeat star later that month.

Munn, for her part, had been single for many years before deciding to take her relationship with Mulaney to the next level. Her last serious relationship was with football star Aaron Rodgers from 2014 to 2017. And although she’s dated other men in the past, the SNL star’s announcement that they were expecting their first child together proved that this time, things were serious.

The couple welcomed their son, Malcolm, on Nov. 24, 2021, and have both been sharing cute snippets about their new family including Malcolm’s firsts (his first restaurant visit), how Munn celebrated Mother’s Day (with a bucket of chicken), and other relatable parenting posts.

So, how did the lovebirds go from casually dating to starting a family together in just four months? Look no further than this complete timeline of their relationship.

Mulaney and Munn’s timeline actually started years ago. In 2015, the X-Men: Apocalypse star told HuffPost Live that they met at a mutual friend’s wedding. “We were at a wedding together and I was like, ‘Oh, my gosh, do you and your fiancée want to go have dinner or something and go hang out?’” she recalled. “At first it was cool, and then I kept going up to him at the wedding like, ‘So, you having fun?’ I was just so obsessed with hanging out with and talking with him.” Munn added that she tried to keep in touch with Mulaney after the event via email, but he never responded. “I might’ve got the wrong email — probably,” she said. “That’s what I tell myself.”

When the news broke that Mulaney would be returning to rehab for the second time, many celebrities showed their support for the comedian on social media. Munn was among those who sent well wishes his way. “Sending SO MUCH love and support to John Mulaney,” she tweeted at the time with a red heart emoji and lightning bolt. “You got this.”

May 2021: Mulaney Gets Divorced

In Spring 2021, Mulaney and Tendler ended their six-year marriage. “I am heartbroken that John has decided to end our marriage,” his ex-wife said in a statement. “I wish him support and success as he continues his recovery.” Mulaney didn’t personally address the split, but his rep confirmed that the former couple was calling it quits.

“John will not have any further comment as he continues to focus on his recovery and getting back to work,” his rep said in a statement. That same month, a source confirmed to Us Weekly that Mulaney had already moved on and was dating Munn. An insider also dished about their relationship to People at the time. “This is very new, they’re taking it slowly,” the source told the magazine on May 13. “They met at church in Los Angeles.”

The following month, their relationship seemed to be heating up. Not only were they spotted on a lunch date at Rick’s Drive In & Out in Los Angeles, but Munn was also spotted leaving Mulaney’s house later that month. At that point, Munn and Mulaney hadn’t addressed their relationship publicly. However, several sources told Us Weekly that things were getting serious.

“She has been sneaking into some of his shows and loves them,” one insider told the magazine. “Olivia is so smitten.” And apparently, the feeling was mutual. “John thinks Olivia is really smart and she makes him laugh too,” the source added. “They both have a very dry sense of humor.”

During an appearance on Late Night with Seth Meyers, Mulaney made it clear that his relationship with Munn was further along than anyone thought. “In the spring, I went to Los Angeles and met and started to date a wonderful woman named Olivia,” he told Meyers before revealing that they’re “having a baby together.” “I was nervous when I was about to say the news. I’m going to be a dad.”

The 39-year-old comedian continue to gush about Munn, 41. “I got into this relationship that’s been really beautiful and with someone incredible,” he said, telling Meyers that the Predator star stuck by his side through the ups and downs of his recovery. “That’s been very incredible,” he continued. “She’s kind of held my hand through that hell.” And according to People, they are very much looking forward to this next chapter. “They are both extremely excited about the baby,” a source close to the couple revealed. “They couldn't be happier.”

Roughly one month after Mulaney announced the baby news, the soon-to-be parents may be experiencing some relationship woes. “This has been an imperfect relationship from the start,” a source told Us Weekly on Oct. 23. “Even though Olivia’s going to be a wonderful mother and has great support behind her, Olivia’s friends just don’t see these two being a couple in a year’s time.”

Together or not, those close to the couple are confident that they will “make great parents.” However, what remains unclear is if “they are going to do that together or apart.” “Olivia and John still have to decide what kind of future they’re going to have together, if any,” the insider continued, adding that it’s a “time of uncertainty” for the pair. “[They] are a long way from deciding and locking in what their relationship is going to be going forward.” Bustle has reached out to the couple’s reps for comment and will update this story when we hear back.

Us Weekly’s report was published one day after gossip account Deuxmoi posted an anonymous tip on their Instagram that Mulaney and Munn have already called it quits. “I’ve heard recently from a fairly reliable source that this B-C list celebrity and her baby daddy A list comedian have recently called it quits,” the tip read. “Source is a friend who works in publicity, so make of that what you will.”

It’s worth noting that shortly after the rumors surfaced, Entertainment Tonight reported that they were false. And in an interview with Munn for her new film Violet, she told the outlet about what she’s most excited for when it comes to motherhood. “Justine [Bateman, director of Violet] and I had a long conversation about [motherhood] the other day, honestly, I’m just excited about meeting whoever it is, and bringing a little person into this world,” she said. So far, Mulaney and Munn have not addressed the rumors themselves.

On Dec. 17, TMZ reported that Munn gave birth to a baby boy on Nov. 24 in Los Angeles. Exactly one month after reportedly welcoming their newborn, the new parents took to Instagram on Dec. 24 to introduce him to the world. “Meet Malcolm Hiệp Mulaney,” the SNL star wrote. “He has his whole life ahead of him. He hasn’t even tried seltzer yet. I’m very in love with him and his whole deal. Happy Holidays.”

Munn, for her part, called their son her “Golden Ox baby” and also wished her followers a happy holiday.

January 2022: The Family Is Thriving

It hasn’t even been two months since Munn and Mulaney welcomed Malcolm into the world, but parenthood appears to be going very well. At the start of the new year, the Buddy Games actor shared a selfie of her lying beside her newborn and staring lovingly into his eyes. “Happy New Year,” she wrote.

Exactly one week later, on Jan. 8, Munn took to Instagram again to share a photo of Mulaney loving on their baby boy in front of their Christmas tree, which they still have not taken down. “The smooshiest smoosh 💋 (And yep, our Christmas tree is still up 🙈),” she captioned the adorable snapshot.

Mulaney served as the host on Saturday Night Live’s February 26 episode, with musical guest LCD Soundsystem. While he was prepping for the show, he was visited by his love and his new son. Munn shared several pictures from the trip, including one which she captioned, “Malcolm visited SNL Thursday afternoon. Here he is looking like your uncle being carried out of a wedding because he went too hard.” She also posted a simple pic of the program’s title card, which at the time featured Mulaney and Malcolm, and all she said was, “Proud of my guys.”

Last May, when Malcolm turned six months, Munn posted a sweet update about her son and his blossoming personality. “6 months ago today Malcolm made me his mama. It’s so much fun getting to know him,” she wrote on Instagram on May 22, before listing down his newly-formed traits. She also made a special callout to Mulaney and their sweet father-and-son relationship. “[Malcolm] lets out a squeal and kicks his legs whenever his daddy comes home.” A few weeks before, on Mother’s Day, she shared a photo of her baby bump and thanked her two dogs, or as she wrote, “the pups who made me a mom first.” In another Mother’s Day post, she wrote, “Thank you to @johnmulaney for knowing that all I wanted for Mother’s Day was a bucket of chicken, a box of biscuits and for him to take over all nap duties today.”

On Father’s Day, first-time dad Mulaney posted a sweet photo with his son where Mulaney was beaming. He didn’t write a caption but he low-key marked the occasion by geotagging it “Father’s Day.” Munn, too, posted a cheeky shoutout on her Instagram Stories and wrote, “Happy Father’s Day to Malcolm’s assistant.” Fatherhood seems to sit well with Mulaney. Just a couple of weeks prior, Munn let her followers in on what Mulaney’s like behind closed doors with a video posted to Instagram of Mulaney making Malcolm laugh. “When he squeezes his eyes shut from laughing so hard,” she wrote.

More like this
Brittany Snow Files For Divorce From Tyler Stanaland After 'Selling The OC' Drama
By Grace Wehniainen and Radhika Menon
Rita Ora Finally Opened Up About Marrying Taika Waititi & Their "Perfect" Wedding
By Sophie McEvoy and Catharina Cheung
Hilary Duff's Husband Matthew Koma Has Her Name Tattooed On His Butt
By Jake Viswanath and Stephanie Downs
John Corbett's Wife Bo Derek Once Revealed If She's Team Aidan Or Team Big
By Alyssa Lapid
Get Even More From Bustle — Sign Up For The Newsletter
From hair trends to relationship advice, our daily newsletter has everything you need to sound like a person who’s on TikTok, even if you aren’t.

This article was originally published on Sep. 9, 2021