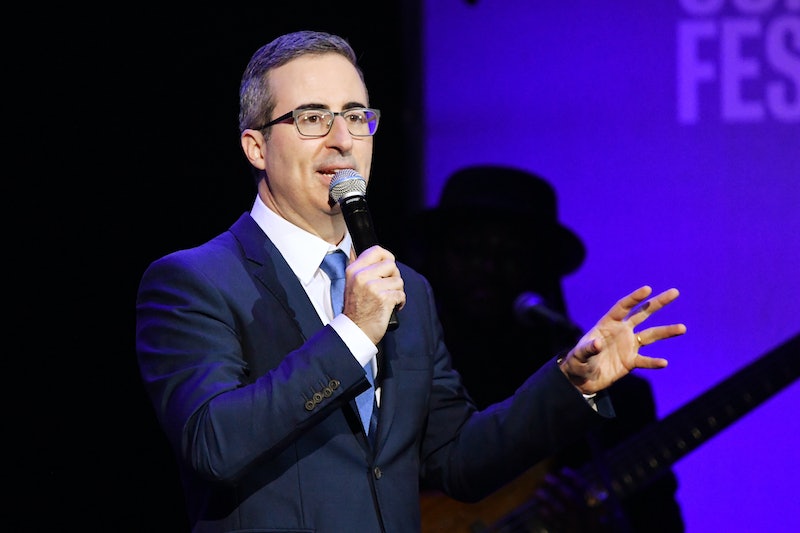 Watch out, Raven Baxter: one of TV’s most prolific late night hosts may also be a psychic. John Oliver’s comments on Meghan Markle joining the royal family are going viral in the wake of the couple’s revealing interview with Oprah Winfrey. The Last Week Tonight host joked about Meghan’s situation prior to her May 2018 wedding to Prince Harry, and it’s actually impressive how spot-on his remarks ended up being just three years later.

During an interview on The Late Show with Stephen Colbert in February 2018, Oliver expressed sympathy to the future Duchess of Sussex for marrying into the Royal Family and anticipated that she may have a difficult time adjusting to her new life. “I would not blame [Meghan] if she pulled out of this at the last minute,” he told Colbert. “I don't think you need to have just seen the pilot episode of The Crown to get a basic sense that she might be marrying into a family that could cause her some emotional complications.”

Oliver went on to call the royal family “an emotionally stunted group of fundamentally flawed people” and referred to their work as a “very silly pseudo-job” rather than a legitimate living. “That's what she's marrying into,” he continued. “I hope she likes it. It's going to be weird for her. I would not marry into the royal family. I'm a commoner. I would not be welcomed — especially after what I've just said.” Twitter users started sharing the clip after the March 7 interview, impressed at how accurate Oliver’s assessment of the situation was — though the host has yet to comment on Meghan and Harry’s recent interview himself.

During the interview, Meghan opened up to Winfrey about her time as a senior working member of the royal family and the toll it took on her mental health. She revealed that she had suicidal thoughts before eventually stepping down from her post in January 2020. “I was ashamed to say it at the time and ashamed to have to admit it to Harry, but I knew that if I didn't say it, then I would do it,” she said. “I just didn't want to be alive anymore.”

The Duchess of Sussex went on to explain how she feels about the fact that Buckingham Palace didn’t protect her from disparaging and often racist headlines that dominated the British tabloids after her wedding. She also claimed that a royal family member had “several conversations” with Harry, relaying concern about how “dark” their son Archie’s skin would be.

On March 9, two days after the interview aired, Buckingham Palace released a statement on Queen Elizabeth’s behalf, stating that the family was “saddened to learn the full extent” of how the Sussexes felt while working for the Palace and promising to address these issues internally. “The issues raised, particularly that of race, are concerning,” the statement reads. “While some recollections may vary, they are taken very seriously and will be addressed by the family privately. Harry, Meghan and Archie will always be much loved family members.”