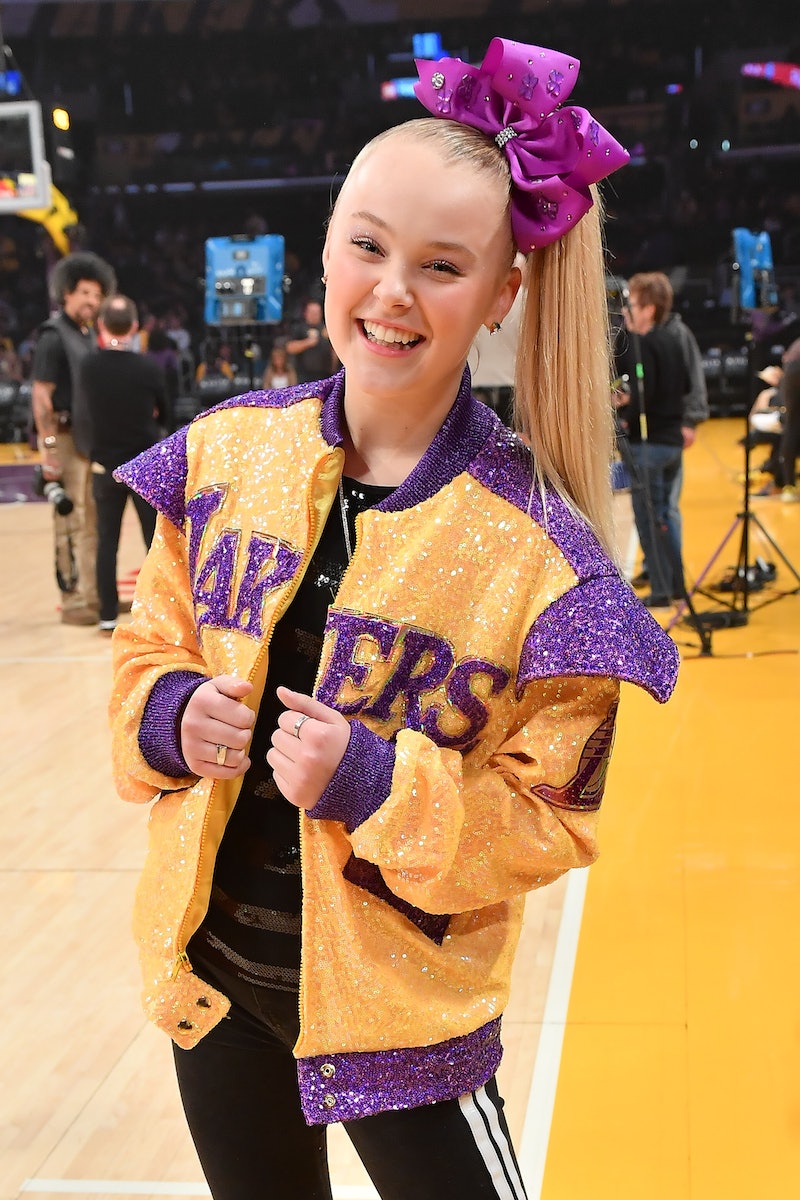 As JoJo Siwa debated whether or not to share her true self with the world, she had one "super encouraging" person in her corner. While talking about her decision to come out during an appearance on The Tonight Show Starring Jimmy Fallon, JoJo Siwa revealed that her girlfriend encouraged her to come out on social media, after the former Dance Moms star dropped some hints about her sexuality online. The 17-year-old explained that her Jan. 22 announcement came after she collaborated with members of the Pride House — a group of LGBTQ+ Tik Tok stars — on a video to Paramore's "Aint It Fun."

"I was like, I think this TikTok that we're doing ... I think this is going to out me," Siwa told host Jimmy Fallon about her mindset before she came out. "And I was like, I don't really mind because it is true — I do have the most amazing, wonderful, perfect, most beautiful girlfriend in the whole world." While the social media star explained that her sexuality is "not something I'm ashamed of," she just wasn't ready to share her long distance relationship with the internet until that moment.

But once she realized that video (and the subsequent TikTok she posted dancing to "Born This Way" by Lady Gaga) could be seen as confirmation that she is a member of an LGBTQ+ community, Siwa says her girlfriend encouraged her to share her truth with her fans. "We were both like, 'Technically, I still haven't confirmed it,'" she recalled, explaining that she was on the phone with her girlfriend at the time. "And so I was like, 'I kinda just want to post this picture on my [Instagram] story,' and she was super encouraging. She was like, 'Do it!' And I was like, 'All right,' and I did it."

Siwa says it wasn't until two days after she posted the photo, in which she wears a shirt declaring her the "Best. Gay. Cousin. Ever," that she realized "how risky" it was to come out, considering her massive audience. "I was like, 'Well, technically, that was a really big risk that I took posting that,'" she said, revealing that her girlfriend then pointed out that she could have "lost everything" by coming out. "But if I lost everything I created because of being myself and because of loving who I want to love, I don't want it. That's not what I want if I can't love who I want to love. That's one of the most important things to me."

Despite the risk, Siwa doesn't regret sharing her true self with the world at all. "I'm just so happy because now I get to share what makes me the happiest with the world, and it makes my heart so happy," she told Fallon. The Dance Moms star then encouraged other members of the LGBTQ+ community to remember that there are "so many people" who are going to accept and support them no matter what. "[Coming out] can be a scary thing," Siwa said. "I say, even if there's a million people — that's a lot of people — that don't accept it, there's a hundred million that do. And a hundred million is a lot of people. So, always keep that in mind."

Siwa experienced that acceptance for herself, as her social media was flooded with positive messages after she came out. "For the last 48 hours, 72 hours, I have gotten the most endless amount of love and support," Siwa said in an Instagram video on Jan. 23. "I am really, really happy. And now that the world gets to see this side of my life, it makes me really happy. ... I have felt so much love, and I have felt so much happiness surrounding me, it's unreal."