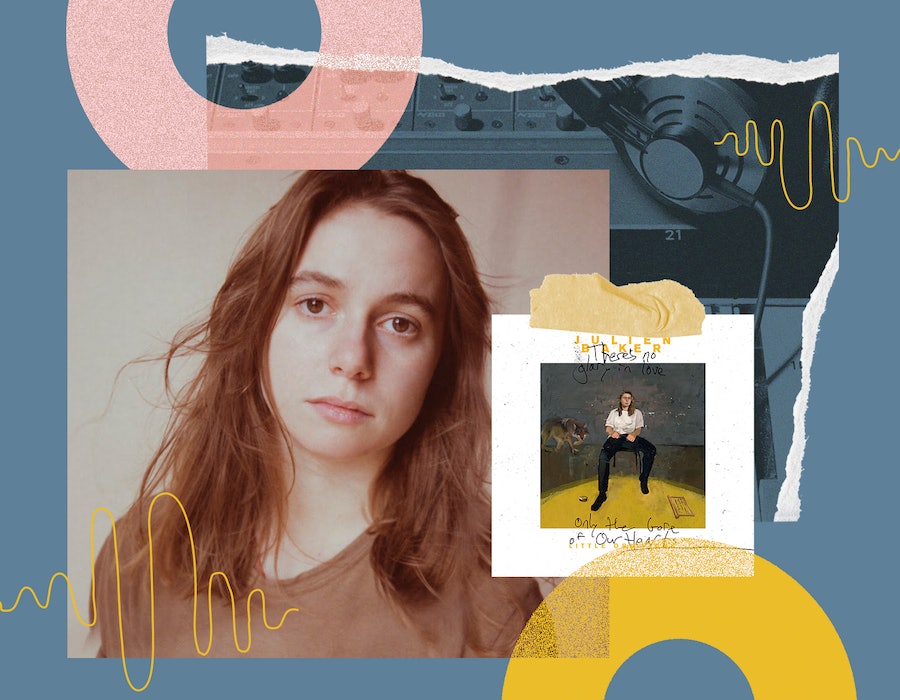 Baker has experienced a whirlwind half-decade since her 2015 debut Sprained Ankle enthralled critics with its searing chronicles of addiction, depression, and crises of faith. Since then, she's released a second album, collaborated with Phoebe Bridgers and Lucy Dacus as part of the supergroup Boygenius, and toured the world. But singing and writing about keeping one's demons at bay presented a new challenge when they returned in late 2018, forcing Baker to re-evaluate her years of sobriety, her faith, and their ties to her identity. Though she's deliberately unspecific about the details, a relapse is the focus of her third album Little Oblivions, which gives Baker's signature self-lacerating songwriting the support of a full band to work through the events of the past two years.

It's an album of raw emotions that soar over sleek production; a contradiction of the kind that Baker is learning to accept, particularly after her sophomore 2017 release, Turn Out the Lights, offered shreds of hope in presenting her struggles as resolved. Baker points now to a lyric on the album track “Appointments” — "Maybe it's all gonna turn out all right / And I know that it's not, but I have to believe that it is" — as a harbinger of the challenges to come. "I’m literally saying, 'I have a sense that things are not gonna be fine, but I’m not gonna admit it, I’m just gonna keep on acting as if things are gonna be fine… That is denial! That is literally the experience of denial," she says.

It’s an ideology she’s keen to avoid in the future. Speaking from her home in Nashville, Tennessee, Baker says she’s been using the downtime of quarantine for running, drawing, and playing music — "grinding life for XP, as it were," she jokes. Below, Baker discusses the paradox of being a genuine performer, Fall Out Boy, and being old enough to "get" jazz.

On Re-Evaluating Her Sobriety & What It Means To Be Genuine

Lyrically, Little Oblivions seems much more interested in the shades of grey in life, whereas Turn Out the Lights and Sprained Ankle were a lot more morally binary. How would you describe your outlook on life now versus on your previous two albums?

I considered myself on Turn Out the Lights to be very... principled. I had a whole bunch of specific behaviors I adhered to. I was completely sober, bone dry sober. I had this relationship with straightedge hardcore [music and culture] that kind of developed this thinking in me that’s a weird cousin of purity culture that I didn’t realize. But I think the way that I animated myself to be dedicated to sobriety in those years was to see it as a power over substance. Like, I worked out and ran so much that it hurt my body, because I wanted to be disciplined and have the power — mind over body, I guess. I’m not trying to attack that particular belief system, it’s more the way my brain latched onto it so obsessively.

At the beginning of writing this record, I was re-evaluating the cause of why I was being so principled and I think I got a little disillusioned with myself. I was like, "Oh my goodness, what is this actually doing good for anyone?" I got so resentful at the powerlessness of living that way that I then just was like, "I guess I’ll just do whatever because it’s immaterial now." And then when I did that and faced all the challenges that come with that, I had to rebuild my values for different reasons that were more internal than external, you know?

On "Faith Healer," you say you'll believe anyone who makes you feel something — whether it's a religious figure or a snake oil salesman. On a meta level, I feel this way about music: I, as a listener, will believe and be convinced by someone who makes me feel something. Have you thought about your role as a musician in that way?

Yes, like all the time. It’s this giant, impossible paradox, right, where we prize genuineness in people whose jobs are to perform because that is how they get the income to live. The way to make music happen [as a career] is to become a performer, and a performer is so much different than a musician. Over the past couple of years it’s been this slow parsing of, how beholden do I actually feel to a job I never claimed to be qualified for? I feel competent as hell writing songs. I love writing songs. I actually feel wild because I can’t believe I just said that. That’s like the only confident thing I have said in the past 10 months!

Music is subjective. You don’t have to think that I’m good, but I would like for people to think that I’m honest. But in a sense, even that is kind of a more meta version of vanity. I have this illusion of myself that I was trying to perpetuate that I’m genuine. And it was actually super destructive. It was destructive to me personally because that is a LOT to expect of a human being.

We also as a culture think that somehow genuineness is static, and that realness means that you don’t change — you don’t change when you’re around different groups of people, you don’t treat different people differently. And that is not what happens in the events of a human being’s life! So it’s like, now I am different, and I am terrified to be different than [before].

You play all the instruments on this record, but is there an instrument you don’t play that you wish you did?

I wish I played lap steel so I could complete the bluegrass trifecta of banjo, mandolin, lap steel. But it’s in a weird tuning and it’s expensive, so.

What’s the first CD you ever bought?

I’m going with Evening Out with Your Girlfriend by Fall Out Boy. Or it might have been Take This To Your Grave.

Do you have a go-to karaoke song?

Oh my god, I’ve only done karaoke once, and it was a disaster. And I’ll tell you why: My go-to karaoke song that I had been saving for when I finally did karaoke was “The Reason” by Hoobastank. It’s funny, but then I forget that that song is slow and has like five f*cking verses, so it’s only funny for 30 seconds and then everybody is watching you standing there singing “The Reason” seriously. Sorry!

What's a lyric you love?

Porches, “Wrote Some Songs.” That song, where he’s like, "When asked with my life what I’ve done, I screamed, ‘I wrote some f*cking songs.’" [Laughs] That’s the craziest lyric to me!

I wanna say no but OK, you know what, this week I’ve been doing a deep dive on this dub band called Khruangbin. Their new record is more world-music funky, but they have an album that’s just dub — drum and bass. I never thought I’d like that kind of music but I’ve been listening to it a lot. I’m also at that point in my life where I’m old enough to get jazz, which is like the same time where you’re too old to mosh.

Are you having a jazz phase right now?

I wish I weren’t! [Laughs] I moved into a house with a whole bunch of people who went to music school — for music, not for like the shit I went to music school for, like fixing guitars and learning circuit diagrams. They went to real music school, and they listen to all this amazing funk and jazz. Maybe it’s just when you’re inundated with something in your surroundings it becomes more accessible to you.

I never thought I would get jazz, and now I understand why people listen to it. And now I wonder if you can do that with any kind of music. Like, I wonder if I just sat down with house music enough if I would be like, I get it now.

To an extent, maybe. It’s an exercise!

What job would you have if you weren’t a musician?

I used to think high school but now I think maybe college professor. But ideally it would be somewhere where the job was easy and I had little to no rules, like a community college. I don’t want to become a professor of musicology at Yale or some shit. I just wanna teach at like, Southwest College in Memphis, Tennessee, and be unexpectedly passionate about my job and freak out all my students.