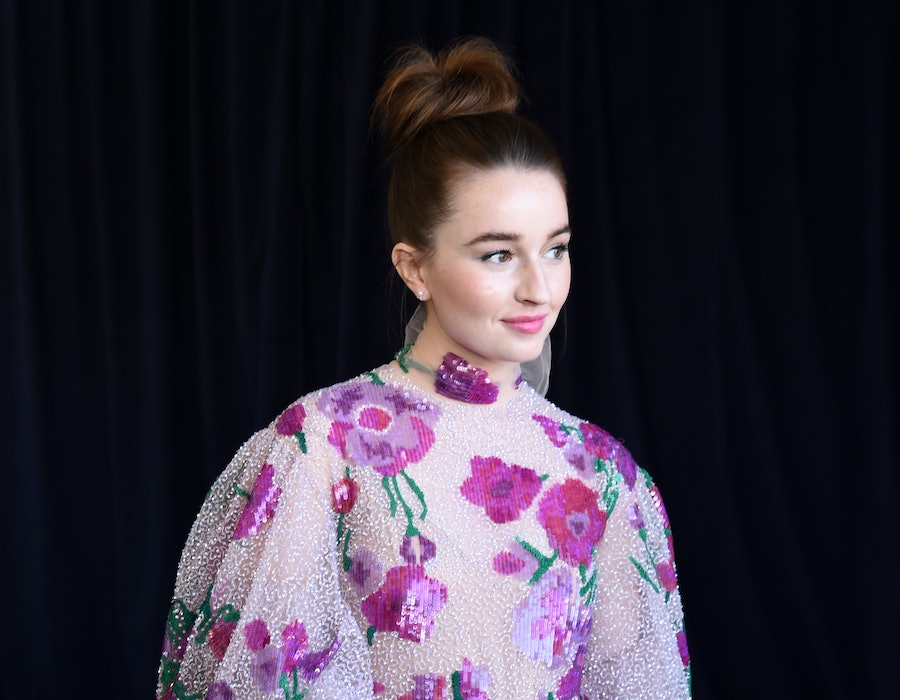 When Kaitlyn Dever gets a part, she doesn’t see a role to play, but a person to become. “After I’m done with a character, I still dress like the person for a while,” Dever tells Bustle. Each new persona, she says, “works on a different part of my brain.” Right now, the 24-year-old actor is in Rome, having traded in Zoe Murphy’s jeans-and-a-backpack uniform from Dear Evan Hansen to take on the titular role in Rosaline, a comedic retelling of Romeo & Juliet from the perspective of Romeo’s ex. But that doesn’t mean Dever has shed Zoe completely: “Zoe taught me that I don't have to care so much about what other people think of me and I can just really be comfortable in my own skin,” she says. “I’m going to be more like Zoe Murphy.”

It makes sense that Dever would hold her characters so close. The actor grew up alongside the roles she played; they were her childhood company. When she was 5, her family moved from Phoenix, Arizona, to Dallas, Texas, after Dever’s dad was cast as Barney the Dinosaur in Barney & Friends. She immediately enrolled in the Dallas Young Actors Studio, and began landing parts as early as her 12th birthday, when she was cast in an American Girl movie. Then came scene-stealing turns on Justified and Last Man Standing, all before she was 16 years old.

As she grew up, her state of mind was preserved in interviews, including for this very publication. Reading them now, they’re almost like an accidental diary. “I think I went into Bustle when I was, for the first time, in New York — when I was probably 15 or something,” says Dever, laughing as the memory floods back. Back in 2013, she told our reporter that she’d always loved music, and hoped to release covers that she’d recorded with her younger sister, Mady. Fast-forward to now, and Dever and Mady are the two halves of the pop-folk act Beulahbelle. They released a music video for their first single, “Raleigh,” last year.

Another dream she’s seen come true? Landing a part in a musical. “I've wanted to do a musical literally my entire life, and film adaptations of musicals don't come around too often, so I put a lot of pressure on myself,” Dever says. When she got the audition, she immediately booked studio space to rehearse in London. (She was abroad to accept a BAFTA Rising Star award for her turn as Marie in Netflix’s Unbelievable — the story of a woman accused of lying about a rape, a Pulitzer-winning ProPublica report — and “didn’t want to do it in my hotel and disturb the guests.”) Dever screamed and cried when she found out she’d been cast as Zoe, the teenaged girl who befriends Evan (Ben Platt) after he feigns a friendship with her troubled brother. This was her shot to sing on camera, 10 years after she’d told a reporter it was her ambition.

Still, there’s an ocean of anxiety between wanting something and getting it. Dever was nervous to sign on to Dear Evan Hansen. There have been a number of incredible Zoe Murphy performances on stage, and this was Dever’s first time doing a version of musical theatre. The songs would be recorded live on set rather than in a studio, something she didn’t realize when she auditioned. Dever figured out how to make a musical on the job. “Each thing that I do, I’m always like, ‘Ooh, this is going to be super challenging and this role is a little bit scarier than the last,’” she says. “I’m just exploring more elements of myself in a way, and I’m pushing the boundary each time.”

Next up, Dever will appear in the Hulu miniseries Dopesick, about the American opioid crisis. When I ask Dever if she intentionally grabs at projects that speak to social and political issues, her answer takes me back to Short Term 12’s Jayden, the teenager living in a group home whom Dever played when she was only 16 herself. “What I learned very quickly with Short Term 12 is that you can create a lot of impact and really move the needle forward.” Through that film, she was invited to help fundraise for the Alliance For Children’s Rights. Later, when Unbelievable screened for lawmakers on Capitol Hill, Dever made sure to be there.

It’s not just the advocacy that she cherishes: Dever has started to see the self-exploration she does at work as more than just a perk. “I think what's so cool about what I do, and I think is ultimately why I do what I do, is that I am figuring out who I am through these characters ... I think the Kaitlyn that did a Bustle interview when she was 15 didn't maybe realize that at that point. But I really am still figuring out — I think even more so now — I'm really figuring out who I am through the jobs that I do and the stories that I tell.” Along the way, we’ll be watching

More like this
On 'The Handmaid’s Tale,' Christine Ko Fights Back
By Gretchen Smail
Jinkx Monsoon Is About To Get Real Sketchy
By Sam Ramsden
The New Bachelor Will Be Announced Next Week & Here Are The Top Contenders
By Grace Wehniainen
An Extremely Messy Ranking Of What Actually Happens In 'Don't Worry Darling'
By Chloe Foussianes
Get Even More From Bustle — Sign Up For The Newsletter