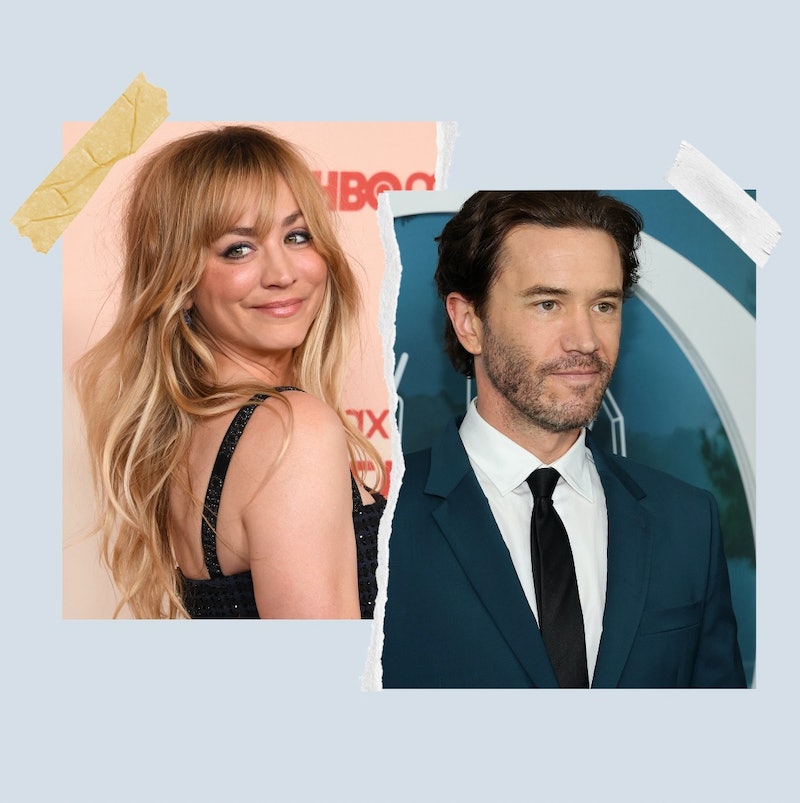 On May 23, super TV producer Greg Berlanti — the mind behind You, The Arrow, Supergirl, Chilling Adventures of Sabrina, The Flash, and Riverdale — received his star on the Hollywood Walk of Fame. Cameras spotted Kaley Cuoco, who fronts Berlanti’s The Flight Attendant, at the star-studded event, and she wasn’t alone. The 36-year-old star attended the ceremony with her new boyfriend, Ozark star Tom Pelphrey, marking their first public appearance together. While the couple watched the event and listened to speeches, they sat next to one another looking cozy and holding hands.

In a later interview with USA Today, Cuoco gushed about Pelphrey, revealing how they met through show business. “We have the same manager (Andrea Pett-Joseph), and we were set up by (her), which is so Hollywood,” she joked. “She's like, ‘Oh my God, I think you guys are perfect for each other.’ We met at the Ozark premiere... and Tom walked in, and I heard his voice, and I turned around, and it was like my life was over, or just starting.” She went on to call it “love at first sight” and explained how serious they were. “We were immediately connected,” she said. “I do feel like I've known him my whole life, but I wasn't ready for him. We're ready to build a life together.”

Cuoco just appeared in Season 2 of the HBO Max series The Flight Attendant, which netted her a second Emmy nomination for Outstanding Lead Actress in a Comedy Series. Pelphrey rose to prominence as one of the stars of Ozark, which earned him his own Emmy nod for Outstanding Guest Actor in a Drama Series. He also appears in the Amazon Western series Outer Range, which debuted on April 15.

READ NEXT: What Is Kaley Cuoco’s Net Worth?

Previously, the TV stars took to Instagram on May 3 to simultaneously post sweet photos announcing their relationship to the world. Cuoco uploaded a carousel of images and videos with Pelphrey that appear to have been taken during a getaway to somewhere mountainous, with the last snap being of him planting a kiss on her cheek while she smiles. She captioned her post with, “Life lately ♥️🌲 🐾 💫 ‘the sun breaks through the clouds, rays of gold slipping into my eyes and heart, rays of yellow to break the grey’.” Pelphrey’s post included just one image with a much longer caption, an unknown quote from 2004.

In July, Cuoco posted a tribute to her new beau to celebrate his landmark 40th birthday, sharing a glowing portrait of Pelphrey in the woods. “To the incredible man that saved me in all the ways,” she wrote. “Happy birthday, baby! To know you, is to truly adore you … the world lit up the day you were born ❣️ 🎂 I love you!!” She kept the celebration going in her Instagram Stories, posting snapshots from their relationship and calling him “the birthday babe with the best laugh,” an “animal loving birthday stud” and a “yogi birthday boy.”

Both Cuoco and Pelphrey have been in high-profile relationships in the past. The former Big Bang Theory actor announced she and her equestrian husband Karl Cook were separating in September 2021 after three years of marriage. It had been the second wedding for her, as she was previously married to tennis player Ryan Sweeting. Pelphrey dated Thor actor Jaimie Alexander for two years before they went their separate ways.

More like this
You’ll Most Definitely Recognise Kyle Pryor’s Soap Star Girlfriend
By Sophie McEvoy
Is Blake Lively Or Penn Badgley The Richest 'Gossip Girl' Star From The OG Series?
By Hugh McIntyre
Theo James Revealed The Truth About His 'White Lotus' Nude Scene & Fans Can't Cope
By Stephanie Topacio Long
The 'Kenan & Kel' Reunion On 'SNL' Took A Dramatic Turn, Thanks To Keke Palmer
By Brad Witter
Get Even More From Bustle — Sign Up For The Newsletter

This article was originally published on May 4, 2022