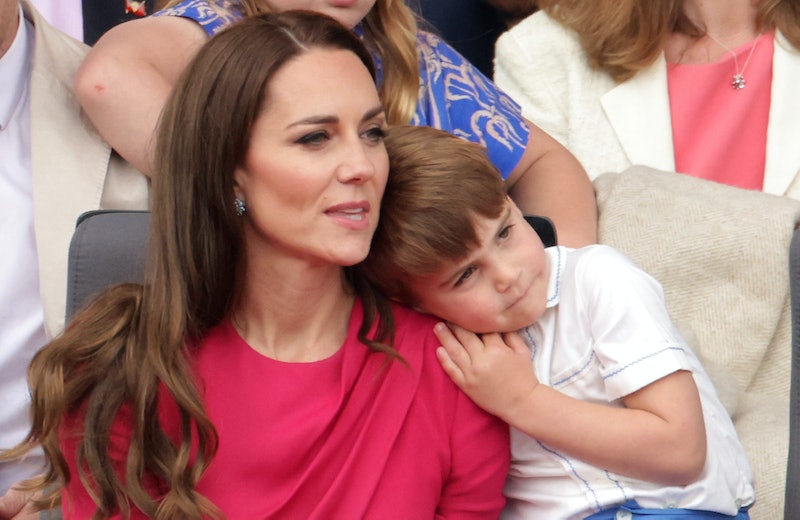 Prince Louis may only be 4 years old — and famous for his meme-worthy faces — but it seems he can be counted on in tough times. The Prince and Princess of Wales’ youngest has been a help to his mom, Kate, as the royal family grieves his great-grandmother Queen Elizabeth II. In fact, it was Louis’ words of comfort that Kate shared with supporters outside of Windsor Castle on Saturday, Sept. 10.

Earlier in the day, Prince William had shed light on what the queen meant to him personally. “She was by my side at my happiest moments,” his statement read, in part. “And she was by my side during the saddest days of my life.” The future king also highlighted the close relationship she had with his wife and three children — a fact that was underscored when Kate recalled Louis’ words to well-wishers.

William and Kate — joined by Harry and Meghan, the Duke and Duchess of Sussex, in a surprise joint appearance — spent about an hour greeting the crowd gathered outside of Windsor Castle. As the Princess of Wales spoke to a group, she told them, “My little Louis is just so sweet. He said, ‘Mummy, don’t worry because she is now with Great-Grandpa,’” per Hello! magazine. (The queen was widowed in April 2021 after the death of Prince Philip, her husband of 74 years.) Kate was “emotional” as she addressed supporters, according to Roya Nikkhah, royal editor of the Sunday Times.

Kate had a strong bond with the queen — or “twenty years of her guidance and support,” as William put it in his statement. Meanwhile, George, Charlotte, and Louis “got to spend holidays with her and create memories that will last their whole lives.” The family clearly already misses her, but William noted that “it will be some time before the reality of life without Grannie will truly feel real.”

In the meantime, many royal supporters were thrilled to see that William and Harry were able to find some common ground amid their grief. Despite longstanding tension between the Sussexes and other senior royals, the Prince of Wales invited his brother and sister-in-law to join their Windsor walkabout. Prior to the outing, the two couples had not been seen publicly together since Commonwealth Day in March 2020, per the Telegraph.

The royal family will be very much in the spotlight throughout their time of loss. The United Kingdom has officially entered a 10-day period of mourning following Queen Elizabeth’s death on Sept. 8, and Operation London Bridge is underway. On Sept. 11, the queen’s coffin began its multiday journey from Balmoral Castle in Scotland, and it will arrive in London for a four-day lying-in-state ahead of her funeral. Members of the public will be able to pay their respects before the burial service on Sept. 19.