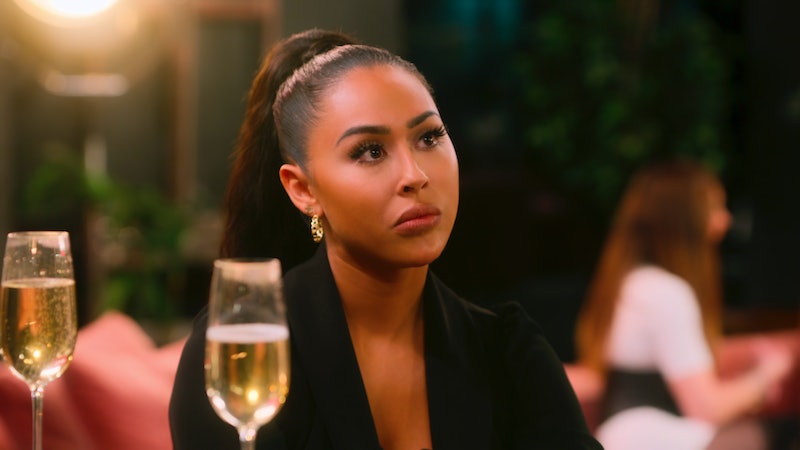 When Kayla Cardona is first introduced on Selling The OC, Netflix’s Selling Sunset spinoff about the agents of The Oppenheim Group’s Newport Beach office, she comes off as the typical new agent, learning the ropes of the luxury real estate game. But that quickly changes when she finds herself at the center of a feud between her fellow co-stars, some of whom she once considered friends, such as Alex Hall, who takes issue with her flirtatious behavior at after-hour events.

At the beginning of Season 1, Kayla seems aligned with Hall, Polly Brindle, and Brandi Marshall, but she is then quickly recruited to the alleged “dark side” and becomes friends with Alexandra Jarvis and Alexandra Rose — though not for long. The back and forth drama on the show is still ongoing in real life, as Kayla tells Bustle that she rarely goes into the office unless Jason Oppenheim calls a meeting or when she needs to “print something.” Ouch.

Here’s everything else you need to know about Kayla.

Kayla’s Instagram presence is full of photos of her and her son, glamour shots of herself posing in Newport Beach, and promo for the Netflix series and her Oppenheim Group listings. Once the show airs, her comment section will likely blow up as fans react to her storyline with the other cast members, particularly Tyler Stanaland. She knows it, too, as she tells Bustle. “I know I'm going to get a lot of hate. But I also do feel like I'm going to get a lot more love because I think the smart people will understand and see for themselves.” She adds, “The thing is that the truth always comes out, and it's only a matter of time.” She thinks people will be able to judge for themselves if Hall and Brindle aren’t as well-meaning as they claim to be. Selling The OC viewers definitely have a lot to take in.

Kayla doesn’t talk much about it on the show, but she is the single mother of a 15-year-old boy named Jordan. She posts on Instagram about him often, and they seem to be very close. Given that she’s not only providing for herself, but for her son, it makes sense that Kayla is so driven to up her game at the O Group and start making those double-digit sales.

The show pits Kayla as a rookie agent who needs help with just about everything, even booking a photographer for marketing materials for her listings. But Netflix says that she was a top 1% realtor at Zillow before joining the O Group in Orange County. She tells Bustle that the Laguna Beach listing she was working on during the show eventually expired. Still, she continues to be “all about” her business and no longer has a side hustle working as a bartender, as she admitted to doing during Season 1.

More like this
'The Crown' Season 6 Has Suspended Filming "Out Of Respect" For The Queen's Death
By Bustle Staff
At 28, Debra Jo Rupp Was Living A Much Different '70s Show
By Grace Wehniainen
Ozzie’s Coming Out Scene With Kitty On 'That ’90s Show' Has Twitter Sobbing
By Brad Witter
The Mysterious Gunther Corporation From 'Gunther’s Millions' Has Dissolved
By Brad Witter
Get Even More From Bustle — Sign Up For The Newsletter
From hair trends to relationship advice, our daily newsletter has everything you need to sound like a person who’s on TikTok, even if you aren’t.