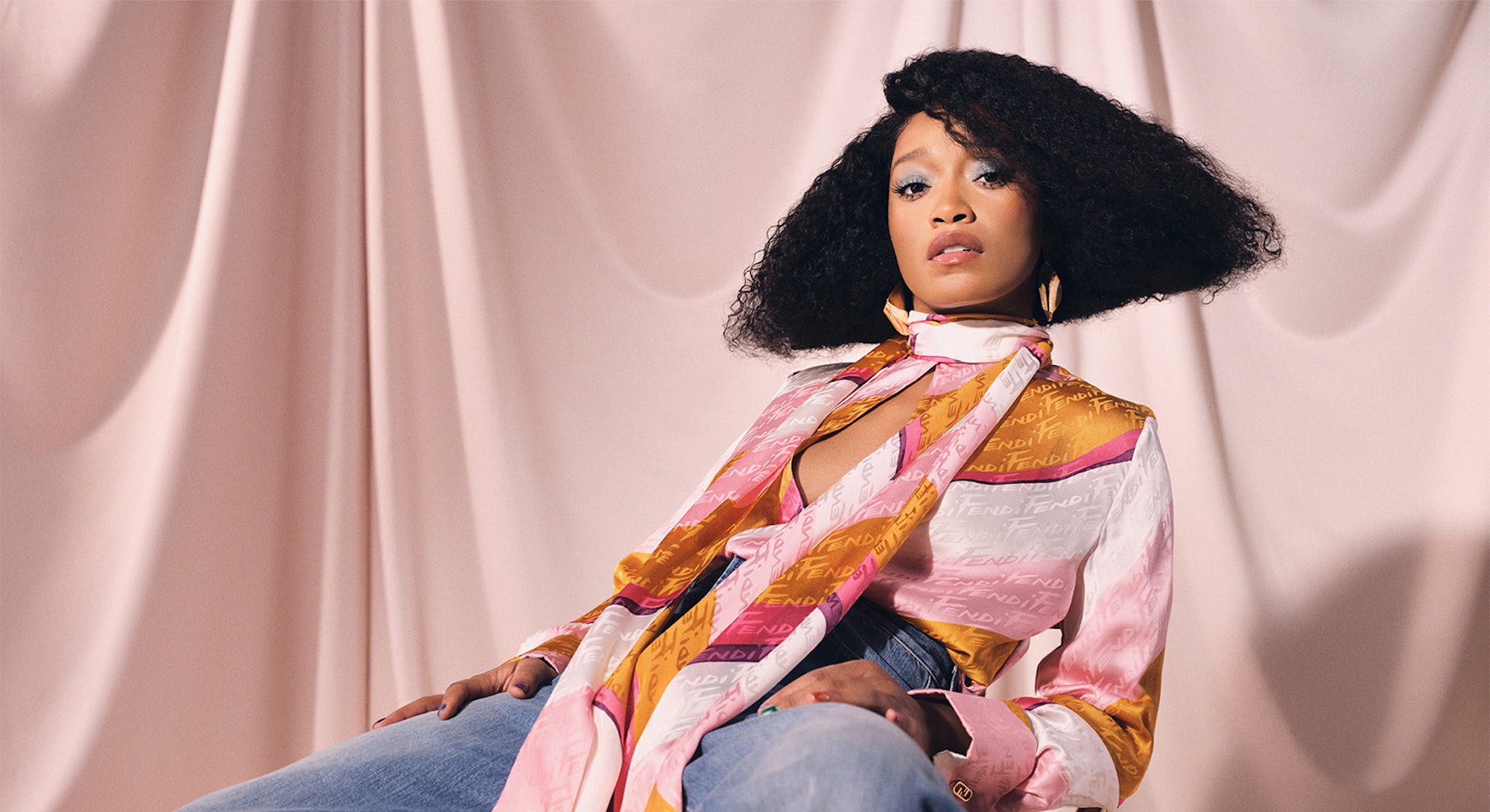 Keke Palmer has had what only she would refer to as a “chill day.” Her car picked her up at a “nice and late” 10 a.m. to shoot part of the finale for a competition show where she’s serving as a judge. After that, she spent her downtime before our conversation reviewing the coloring and visual effects on Big Boss, her first film project. She’s been poring over the footage on every screen she could find: her phone, her TV — even viewing it at work during breaks, but she wants to organize her thoughts before sharing feedback with her team. After we speak, she’ll consider a nap, but she also wants to get some more writing done. There’s a new idea she has on the back burner.

Her work ethic is already the stuff of legend — the internet has a long-running joke that Keke Palmer is constantly working to secure the bag — but the 28-year-old isn’t complaining.

“I love it,” Palmer says of the characterization from her couch in Los Angeles. She’s wearing a black wavy weave with a middle part, her face still beat from being on set. “Your girl is trying to get every job so she can make sure that her family is good, so I appreciate it. Miss Mamas is trying to break generational curses and build generational wealth.”

As an actor, writer, director, and singer, Palmer now finds herself in a unique class of multi-hyphenate. This year marks her 20th in show business, and the anniversary gifts are plentiful: She will appear in three movies (the slave revenge drama Alice, Jordan Peele’s highly anticipated Nope, and the Buzz Lightyear origin story Lightyear) and two animated shows (The Proud Family and Human Resources). Then there’s Big Boss, which will complement her upcoming album of the same name, plus various unscripted gigs to follow her scene-stealing hosting turns at the Met Gala red carpet, the 2020 VMAs, and the third hour of Good Morning America.

“It's just too Virgo to the max,” she says, laughing. “It’s giving Tyler Perry!” The humorous quip is the Palmer you’ve seen on social media, but her tone turns serious when reflecting on her two decades in the industry. “I think it's divine. Like, I thank God,” Palmer says of the rare achievement of still being able to outdo herself this far into her career. “People need to realize I don't quit… I wasn't always trending,” she says. “Keke been doing this since she was 9. You know what I mean? I’ve been working for a long time.”

There is something remarkable about getting to see someone you watched grow up thrive, especially considering the hurdles that come with the tricky turnover from child to adult star. Palmer was 11 years old when she landed her first film role as Queen Latifah’s niece in Barbershop 2: Back in Business. Two years later she appeared in Akeelah and the Bee, earning an NAACP Image Award at 13. “Growing up as a child actress, you can turn real old, real fast,” Palmer says. “It's a blessing to me that I still have been able to maintain some version of existing as someone my age.” Harnessing her unique position of being young but a veteran of the business is part of the reason she says she’s able to juggle so many projects at once. “I'm used to having work be a priority, but I just happen to actually still be a young millennial. I think sometimes that flips over people's heads.”

Palmer credits her family, who are from the Chicagoland area, with providing her the consistency to keep so many balls in the air. “I always talk to my mom every day, I always talk to my best friend Lenoria,” she says. Palmer met Lenoria Addison nearly six years ago on the set of her YouTube project, That’s the Gag. Addison invited her to a salsa dancing class after work one day, and they’ve been tight ever since. “I’m constantly impressed by Keke’s commitment to achieve her greatest passions at the highest level,” says Addison. “Her ability to manifest that, to do just what she says she's going to do, and the love that she pours into not only all of her projects, but also her community, her family, her friends. She really is a very, very caring, kind person.”

Palmer’s pivot into hosting and other unscripted work in between her acting and musical projects worked out so well that cynics could see it as a strategic way to gain new fans and maintain relevance. The gag is that it was more about her insatiable desire to create. “It came from boredom. It came from just me being like, what else can I do? How else can I have fun? How else can I be creative? If I have a hobby or if I have something that I just do once or twice, somehow it can end up developing into something far bigger,” she says. “Maybe back in the day they would've called it ADHD, but I’m just interested in so many different things.”

While Palmer has joyfully expanded her horizons with new hustles, 2022 is a return to the art form that started her career: movies. Hitting theaters March 18 is Alice, in which Palmer plays the titular character, a slave who escapes her Georgia plantation only to find out it’s 1973 and the government abolished slavery over 100 years earlier. She felt compelled to join the project, which is loosely based on a true story, in an effort to change the narrative around seeing slaves as victims rather than the strong-willed survivors they had to be to live.

“Our ancestors had a concept and the understanding of survival that we'll never have to understand or know because they did that work,” Palmer says. “So for me, it's important with the character of Alice that we showed that truth. She wasn't weak. She was smart, strategic, and strong. She chose freedom from the time she was on the plantation to when she left. She never gave them her mind and her spirit, even if they had her body.”

Palmer’s own grandmother moved from the South to the Midwest as part of the Great Migration, so she didn’t have to reach far to find a way into Alice’s psyche. “Knowing that my grandmother left Mississippi for a better way and a better life, that she had the strength to leave everything that she knew behind so that she could give her children a better opportunity? That alone is representative and indicative of the kind of people that I come from. I always look to the past as a way to get resilience and pride,” she says. “Like a kind of secret superpower that I always felt from being Black. We should be extinct, but we're not.”

Palmer will follow Alice with a leading role opposite Daniel Kaluuya in Jordan Peele’s next horror movie, Nope. Working with Peele has already had a big impact on her career, and she credits the experience with helping her finally pursue her dream of getting behind the camera. “First of all, I'm a very curious little baby. So I'm always in everybody's ear like, ‘So what is this? And what is that?’” Palmer explains. “I was always talking to him, asking questions and just watching him fearlessly on set and learning everything I could. I had never written a script before, but just seeing him in his process told me that I could do it. That just lets you know how powerful his aura is, and his brilliance.”

I think that's so important to say when you reach these pinnacles of your life — you’re prepared and you’re still you.

While Palmer’s boldly transparent, vulnerable, and downright funny presence on social media — where she’s shared photos of her cystic acne issues, started a hotline for fans, and even detailed the time she had to go to work barefoot because she accidentally locked herself out of the house — has helped grow her fan base to over 10 million followers on Instagram alone, Nope stands to propel her to an even higher level of celebrity. And with it, Palmer knows, will come even more scrutiny.

“Fame is traumatic, and a lot of attention is not something that everybody can deal with,” she says, adding that she kept her personal life private for years for this reason. It’s only in the last year that she began posting her official boyfriend, fitness trainer and actor Darius Daulton Jackson, whom she reportedly met at Sean “Diddy” Combs’ Memorial Day party in 2021. But for right now, she’s not ready to be anything other than herself online.

“I just think [this] was a moment in time in my life where I really stepped into this kind of boss behavior [of doing] whatever the hell I want to do,” she says of her decision to go public with Jackson, though she notes she reserves the right to stop sharing at any time. “This is the happiest I’ve ever felt with someone. So why would I go out of my way to hide this person? That's a lot more work than just living in my life and being in my life. You know what I'm saying?”

As for the professional shift, she’s prepared there too. “I had that conversation with Daniel,” she says of her co-star Kaluuya, a Peele veteran who himself broke out in Get Out. He told her that when he took home an Oscar in 2021 for Judas and the Black Messiah, he realized that even the most shining achievement of all for actors didn’t make him feel different on the inside. “He went back [offstage] with his Oscar in his hand, he's like, 'Oh, I'm still me.' You know what I mean?”

This is Palmer’s superpower, forged through 20 years in the industry: the ability to be herself. Where she sits now is a place all her own. “I think that's so important to say when you reach these pinnacles of your life — you’re prepared and you’re still you,” she says. “I didn't know that I would still be so close to the me that's always been here when this moment I’ve been waiting for finally arrived. But it's also just another moment.”