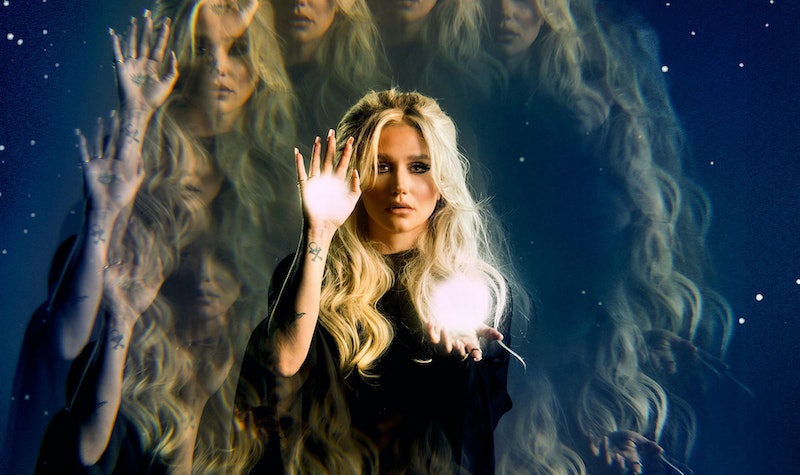 Anyone who has listened to Kesha’s ethereal 2012 deep cut “Supernatural” knows that she’s always had a soft spot for ghosts. So while the thought of Kesha becoming a ghost hunter in Discovery+’s new series Conjuring Kesha may confuse people who’ve only partied to her No. 1 hits “TiK ToK” and “We R Who We R,” it comes as no surprise to her devoted fans that she decided to dive deeper into her fascination with ghosts — and film it for the world to witness.

Conjuring Kesha shows the Grammy-nominated singer attempt to connect with the spiritual realm with help from close celebrity friends. On the show, Kesha listens for lost artistic souls at an abandoned theater with Betty Who, hunts for Bigfoot at Mount Shasta with The Bachelor’s JoJo Fletcher, and explores the Trans-Allegheny Lunatic Asylum with Big Freedia, the latter of which she called her wildest supernatural experience after her cameraman experienced ghostly retaliation. “Watching him in real time get scratched down his spine by a demon when he’s wearing three layers of jackets, a back brace to protect the camera, and underneath all of that, he’s got three scratch marks down his spine,” Kesha tells Bustle. “I caught it all on camera.”

The 35-year-old pop star credits her love of the supernatural to her mother Pebe Sebert, who was “very open about spirituality” while Kesha was growing up. Her first encounter with that realm happened when she was four or five years old. She saw a light orb coming through her window and felt the presence of her late grandmother. “I knew it was an angel, but I didn’t really have the words to tell anybody,” she says. “I'm not sure if I even did tell anybody. It was just a very calm, peaceful, beautiful experience that was for me and my grandmother.”

After that experience, Kesha had two more life-changing encounters — the first when she was 19 while staying with an ex-boyfriend at a hotel in Fort Worth, Texas. “I was woken up. A woman was grazing down the side of my body and standing at the end of the bed,” Kesha recalls, without a hint of fear in her voice. “I saw her as beautiful, and she evaporated, and I went back to sleep.”

More recently, while camping at Joshua Tree National Park, Kesha saw what looked like fireballs in the sky arranging themselves in different formations, which kept disappearing and re-appearing. “All of these experiences have this feeling in common of it not being the reaction you see in movies,” Kesha says. “Not this shock, horror, scary feeling. It was like, ‘Oh, there that is. There you are,’ and I just continued on.”

While on tour, Kesha also tries to incorporate supernatural outings into her schedule, making her tour bus stop at haunted hotels and UFO sighting areas. “My band hates that,” she quips.

If Kesha had the opportunity to play her music to ghosts, she knows which songs she would play to connect with certain spirits. “If it’s a scorned woman, I’d probably sing, ‘I’m a motherf*cking woman,” she exclaims, wailing the chorus of her 2017 anthem “Woman.” “If it was someone that died too soon, never got to go out and party, I might sing them ‘TiK ToK,’ and if it was someone who’s just really heartbroken, I might sing them ‘Praying.’ Really, it’s just case by case. You have to know your audience. That’s rule No. 1.”

“Conjuring Kesha completely 100% informed the direction of my music, and the experiences I had absolutely have woven their way into the lyrics and the tapestry of the new record.”

When Kesha finally had some time off from recording and touring, she decided to foray her love of the supernatural into its own TV project, which ended up being a full-circle moment for her, as it heavily influenced her forthcoming fifth studio album. “Conjuring Kesha completely 100% informed the direction of my music, and the experiences I had absolutely have woven their way into the lyrics and the tapestry of the new record,” noting that one specific “insanely beautiful experience” that she’s hesitant to reveal just yet forms the crux of the yet-untitled album.

Kesha hopes the new album proves how seriously she took Conjuring Kesha and how much effort she put into opening the minds of the audience, her guests, and herself. “The No. 1 thing I want people to know is I’m a very open-hearted, potentially gullible person, so I find it sacred, what I’m doing,” Kesha says. “When you’re opening yourself up to being open-minded to potentially being not alone in this universe, I think you’re opening up really spiritual conversations with yourself. What does this mean? Does this mean we’re not alone? What else is out there?”

Kesha already has ideas on how to explore all of that further on a potential second season of Conjuring Kesha. “I would absolutely love Cardi B and I to go to the Catacombs, and I would love to take Nicolas Cage to the Red Onion Saloon in Alaska,” she adds.

While Kesha understands skeptics may question the legitimacy of her encounters, the singer is adamant that nothing on Conjuring Kesha was staged. “I’m not taking advantage of your hope for not being alone in this universe because that’s what led me to making it,” Kesha says. “When we see things on TV, sometimes we wonder, ‘Oh, is this fake? Is it real?’ I mean, I had the same thoughts when I watched paranormal shows. You don’t have to like it, but just know that nothing is fake.”

Conjuring Kesha is streaming on Discovery+ and airing on the Travel Channel.