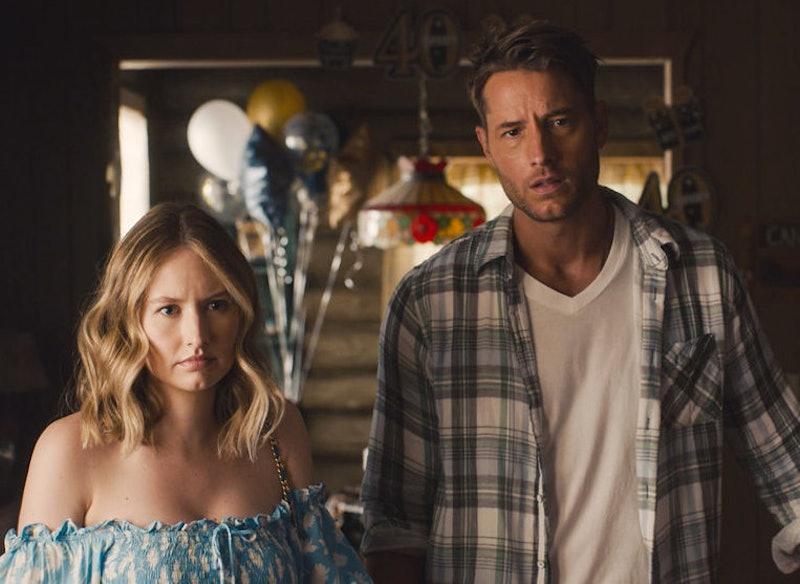 On This Is Us, Kevin and Madison are expecting twins together and seem to be headed towards marriage, but many fans don't think their relationship will actually last. Don't just take their word for it — ahead of Season 5, series creator Dan Fogelman told The Hollywood Reporter, "There's basically many more chapters in Kevin's romantic story."

Justin Hartley, who plays Kevin, hinted at something similar in a recent interview with Entertainment Weekly. He said that he hopes the next flash forward shows who Kevin is with in the future. "You want to know who it is — or if it was someone that had changed," he said, empathizing with fans who are eager to find out.

As always, This Is Us viewers have theories about why Kevin and Madison's current relationship won't last.

Hartley told Entertainment Tonight that he doesn't think fans should "close any door" on this show, including the door to Kevin's potential future with Sophie. "I think we've left it in a way where we'll see what happens. As long as it's an authentic story that makes sense and it's not too far-fetched, anything's possible. There are people that could come back into his life from the past that he's been with before.

Fogelman also told The Wrap that there's a reason the show cut to scenes of Sophie and Cassidy in the Season 4 finale. "Those characters we are not done with," he teased. Perhaps Kevin could still end up with either one.

Reddit user chocomint8 collected several clues that could hint to Madison's time in Kevin's life being short-lived... in a romantic capacity, at least. Both hints come from Season 4, Episode 12. The first is when young Kevin moved from his crib to a larger bed and was sad about not having his sheep mobile anymore. Jack told Kevin that he'll find something else to love and gave him a stuffed animal tiger. As cheesy as it may sound, this could represent Kevin's relationships. It's possible that Sophie is the sheep, and Madison is the tiger. While Kevin can learn to love Madison, she's still not quite right for him.

The second clue stems from when adult Kevin talked to M. Night Shyamalan about how the director changed the ending of Kevin's movie at the last minute. The new one is "the ending everyone wants but still won't see coming," Shyamalan said. It wouldn't come as a surprise if the show was trying to throw viewers off the Sophie scent with Madison, only to later change to the ending many fans have always wanted — Kevin ending up with Sophie.

Another fan theory is that Madison dies in childbirth or sometime before the 2034 flash forward. In that scene, Kevin's daughter enters and asks him, "Are you okay?" Some think she's asking Kevin that because she knows he's about to lose his own mom and understands what that's like after losing Madison.

As Reddit user Fitztragedy pointed out, it seems like future Kevin might be a single father with no woman in the picture. At one point in the show, Toby remarked, "Man, Kevin's house is huge," instead of saying something like, "Kevin and Madison's house is huge." Randall also said it's "classic Kevin" to not have any food in the house. Of course, Kevin and Madison could just break up, but the consensus is that she passed away.

And user jacobnyr thinks Madison will die to mirror Jack and Rebecca's story for Kevin, only this time it's the mom who dies, leaving Kevin to pick up the pieces and take care of his family.

If Kevin is divorced or widowed in the future timeline, he might end up with Sophie after Rebecca's funeral. The last time Sophie and Kevin saw each other was at Sophie's mom's funeral, and Kevin jokingly told Sophie, "I'll see you next time someone dies." Sophie responded, "I'm already looking forward to it." Kevin and Sophie reconnecting at Rebecca's funeral would help soften the blow of losing her, and it would result in that ending many fans want in an unexpected way.

There's still a possibility that Kevin may meet someone else entirely. In an interview with Glamour, Hartley discussed Kevin's relationships with Cassidy, Sophie, and Madison and said, "Are we forgetting one?" The interviewer asked, "Is there someone else?" Hartley deflected with a laugh and added, "I don't know. You'll have to watch Season 5." In his interview with Entertainment Tonight, the actor said, "I think he could find a new person. I think the possibilities are endless."

As you can see, it may seem like Kevin ends up with Madison now, but so much could change. When it comes to This Is Us, no character's future is ever certain... unless you're in the writers' room.

More like this
Paul Mescal, Man Of Mystery
By Samantha Leach and Heather Hazzan
Twitter Is Pouring Out Some Zhampagne As ‘Schitt’s Creek’ Leaves Netflix
By Brad Witter
'House of the Dragon' Episode 7 Might Mark The End Of House Velaryon
By Kadin Burnett
Everything To Know About The Long-Awaited ‘Community’ Movie
By Stephanie Topacio Long
Get Even More From Bustle — Sign Up For The Newsletter