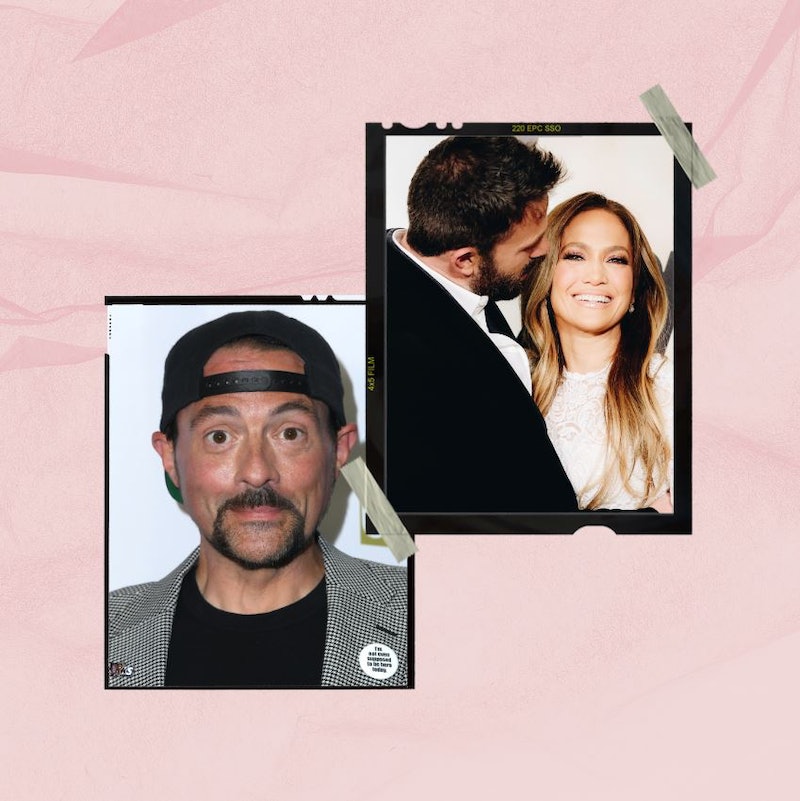 Having witnessed the beginning of Jennifer Lopez and Ben Affleck’s relationship when he directed 2004’s Jersey Girl, Kevin Smith saw the couple’s recent marriage as a full-circle moment. “You’re watching two people who worked very hard to make their love happen and to stick the landing and close the circle,” he told Extra on Aug. 24, days after attending the couple’s Aug. 20 second wedding ceremony in Georgia.

After previously revealing that the couple both wrote their own “achingly beautiful” vows for each other, the director shared more about the actors’ special day, including the fact that Affleck wrote a 12-page speech for his new bride. “He's one of my favorite writers on the planet. He wrote a big speech that he read to her at the wedding, which was breathtaking,” Smith said during an appearance on The View on Sept. 13. “It was long. That's one of my favorite things about Ben; he's his own biggest fan, so he wrote like a 12-page speech. I was like, ‘Keep talking, keep talking.’”

The whole wedding was an emotional moment for Smith, who first met Affleck when he auditioned for 1995’s Mallrats. “I was crying like an old woman at a wedding… like my mother at a wedding,” he joked while promoting Clerks III. “Honestly, like, one of the most romantic moments I’ve engaged with in my life, and it wasn’t even my romantic moment.”

The waterworks had much to do with how happy Affleck looked, and that’s coming from someone who’s seen the actor “very happy” over the course of their 27-year friendship, including when he and Matt Damon won the Best Screenplay Oscar for Good Will Hunting in 1998. “Take all of his happy moments you’ve ever seen… combine them, and you still don’t touch the radiating glow on the man’s face when he was standing at the top of the aisle and Jennifer was walking toward him,” Smith added in his Extra interview.

Lopez’s walk down the aisle was only the beginning. The Chasing Amy filmmaker described the wedding as “a real fairytale ending” that “would’ve made the most hardcore cynic believe in true love.” Admitting that he “cried throughout the whole thing,” Smith called the “exquisite” nuptials “insanely well done, very classy ... but emotional as hell.”

Prior to the Georgia wedding, Lopez and Affleck first tied the knot in a low-key Las Vegas ceremony in July, for which they also wrote their own vows. Calling the intimate event the “best night of our lives” in a July 17 announcement to her “On the JLo” newsletter subscribers, the Marry Me star detailed their arrival shortly before midnight at A Little White Wedding Chapel, which the singer said “graciously stayed open late a few minutes.” They also took photos in a pink Cadillac convertible that Elvis Presley is said to have once used.

“In the end it was the best possible wedding we could have imagined,” Lopez wrote. “One we dreamed of long ago and one made real (in the eyes of the state, Las Vegas, a pink convertible and one another) at very, very long last.”

That didn’t stop them from throwing a much more lavish second ceremony for their closest friends and family about a month later. Held at Affleck’s 87-acre compound on Hampton Island Preserve, the three-day celebration included a pre-wedding party, the ceremony itself, and a brunch, according to People. Lopez, who wore a custom Ralph Lauren gown, even serenaded her new husband with a new song at the party, which Smith, Damon, and others attended.

As an insider shared with Us Weekly, the dad to Violet, 16, Seraphina, 13, and Samuel, 10, also “made an impassioned speech professing his love for Jennifer and her kids,” 14-year-old twins Max and Emme. Affleck reportedly “said the children are the blessing and gift that happened because they didn’t get married before, and that is proof that everything happens for a reason,” the source said, referencing the couple’s first engagement, which they called off in 2004.

More like this
Richard Madden's Dating History Reportedly Includes This Model & A 'Doctor Who' Star
By Radhika Menon
Michelle Obama Opened Up About The "Discord And Discomfort" Of Marriage
By Stephanie Topacio Long
J.Lo Wants To Make A Sequel To This Movie With Ben Affleck
By Jake Viswanath
Jennifer Lopez Shares Rare Holiday Photos Of Ben Affleck & Her Twins
By Radhika Menon
Get Even More From Bustle — Sign Up For The Newsletter

This article was originally published on Aug. 27, 2022