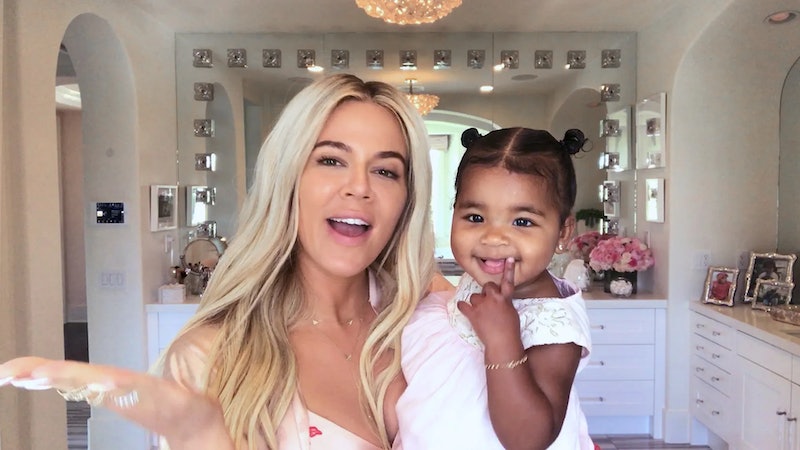 Khloé Kardashian and daughter True Thompson have tested positive for COVID-19, the reality star revealed on Friday, Oct. 29. “Luckily I have been vaccinated so all will be ok,” Kardashian tweeted, noting that she and her 3-year-old with NBA star Tristan Thompson “will be over here in quarantine and following current guidelines.” In a second tweet, she encouraged her 29.5 million Twitter followers to “be safe,” a message she also shared in her Instagram stories the same day.

This isn’t the first time Kardashian has contracted the novel coronavirus. In an October 2020 Keeping Up With the Kardashians episode, which was filmed in March, the Good American co-founder revealed that her COVID symptoms included vomiting, shaking, chills, and the “craziest headache,” also explaining that her chest burned when she coughed. She added on the E! series that she’d “rather be safe than sorry” and was taking the isolation process seriously, documenting the experience with self-recorded footage.

“It was so incredibly scary,” Kardashian later shared during an interview on The Ellen DeGeneres Show last October. “I mean, it still is scary, but especially then, when the whole world was shutting down and we didn’t have really any information or the information we had changed every single day.”

She went on to describe being quarantined in her bedroom for 16 days, while Thompson helped take care of then-2-year-old True. “I don’t care how beautiful of a place you have, being taken away from your child for that long, because I couldn’t be around my daughter, that was the most heart-wrenching thing,” Kardashian said.

After getting healthy, she continued to candidly share her experience, recently telling Twitter followers that the disease had caused significant hair loss. Kardashian also explained that her sense of taste and smell was “the only thing that I didn’t lose, but I had everything else — like anything else you can imagine.”

Because Kardashian volunteered that she was vaccinated, her case is considered a COVID breakthrough infection, which are expected with vaccines. According to the CDC, though fully vaccinated people can still contract COVID, their symptoms “tend to be less severe ... than in unvaccinated people,” and they are “much less likely to be hospitalized or die than people who are not vaccinated.” Approximately 98% to 99% of COVID-related deaths in the United States are now among the unvaccinated, according to Andy Slavitt, one of the Biden administration’s former advisers on COVID-19.

Kardashian’s second bout with the disease could be documented on the Kardashian-Jenner family’s new Hulu reality show, which Variety recently confirmed is currently in production and expected to premiere in the first half of 2022.

This time, at least she didn’t have to be separated from True while recovering.