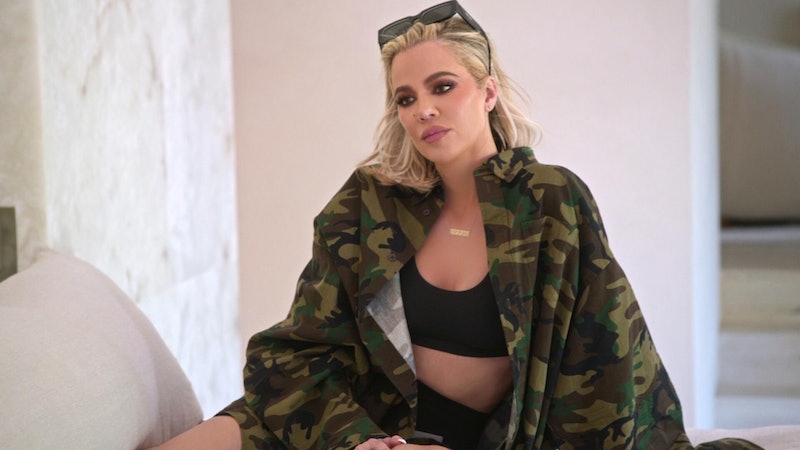 Khloé Kardashian is now a mother of two. In the first episode of The Kardashians Season 2, which premiered on Hulu on Sept. 22, the Good American founder gave the first glimpse of her baby boy with ex-boyfriend Tristan Thompson, taking viewers inside the delivery room where he was born. “I am so grateful,” Khloé said in a confessional. “It's such a beautiful gift that we're able to have.”

In July, a rep for Khloé confirmed to Bustle that she and Thompson were expecting their second child via surrogate that was conceived in November, before Khloé and the world found out that the NBA player fathered a baby with Maralee Nichols. “Ever since December, it’s been this dark cloud looming over me every single day,” Khloé explained. “I’ve been feeling depressed and sad, and now that my son is here, I get to move on. And I get to enjoy. It’s almost like I get to close this chapter and be done with this trauma and put it behind me. Now I finally get to start the healing process. Now I finally start enjoying my life with two kids now.”

During the episode, Kim Kardashian revealed that Khloé’s surrogate had gone into labor early and picked up Khloé to head to the hospital. Kim helped her sister film the delivery process and became the first family member to meet the baby, remarking that he looked just like his sister True Thompson. A couple hours later, Khloé introduced her son over FaceTime to the rest of her sisters, mom Kris Jenner, and True, who was so excited to meet her “baby brother” that she already had a name picked out. “Hi Snowy!” she told the camera, before Khloé laughed and informed her that “his name is not Snowy.”

Khloé has yet to reveal the name of her son, but she did give a hint at what his name would be earlier in the episode. “It is going to start with a T,” she said, meaning his initials would match his sister True Thompson. “I mean, that's really the only names I've been looking at.” Kris was quick to come up with potential baby names, but one suggestion was the most hilarious. “We can name him Travis and then just have an easy three,” nodding to Kourtney Kardashian’s now-husband Travis Barker and Kylie Jenner’s boyfriend Travis Scott.

While it looks like Thompson wasn’t present for the birth, at the end of the episode, he was seen in the delivery room to meet his newborn son for the first time. “I’ve been on the fence about having Tristan come to the hospital or not,” Khloé explained, “but Tristan wants to be here, so I figured, ‘Why not? Let him come.’ I’ll never get this moment back.”

Kylie also shared in Khloé’s newfound excitement about her baby boy, giving words of praise to her sister. “I am so excited for this baby,” she said. “I am just in baby bliss right now, I can’t wait for my son to have a forever friend. She really is such a special, special mom.”