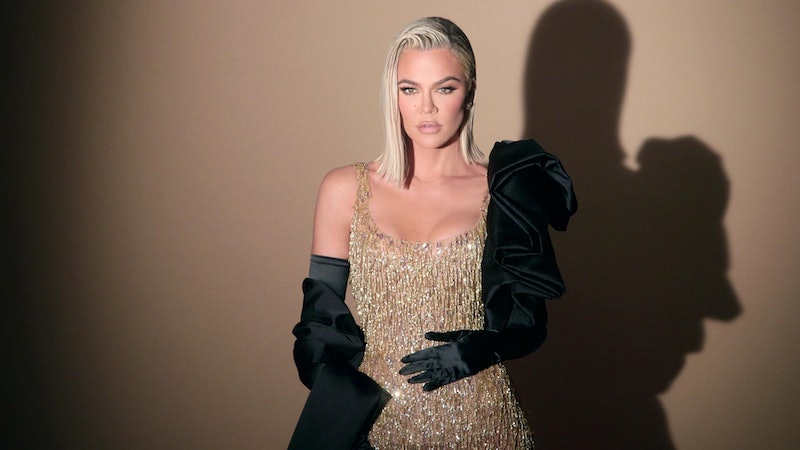 Khloé Kardashian may have told the public all about the circumstances behind the arrival of her second baby with ex-boyfriend Tristan Thompson, but there’s still more secrets to come. On The Kardashians Season 2 finale, it was revealed that the Good American founder’s son was actually born secretly over a week before the public became aware of her new arrival.

On Aug. 5, it was reported that Kardashian had welcomed a baby boy via surrogate. A month prior, it was announced that she and Thompson were expecting their second child, who was conceived in November before they split due to the NBA player’s paternity scandal. “Khloe is incredibly grateful to the extraordinary surrogate for such a beautiful blessing,” her rep told Bustle at the time. The birth was covered on the Season 2 premiere of The Kardashians. However, the finale had a timejump back to where the season first started, and the date that Khloé’s baby arrived was revealed as July 28, 2022.

Days after his arrival, Khloé’s mom Kris Jenner and sisters Kim and Kourtney Kardashian all paid a visit to her home to see the baby — whose name has yet to be revealed, despite Kim’s insistence. “What are we gonna name him?” she asked. “That’s what I need to know.” However, their mom had a suggestion. “How about Rob Kardashian Thompson? And then just call him Rob Kardashian,” she said, laughing. Khloé also kept her son’s face covered on-camera, though Kim teased that he looks like their brother Rob, hence her mom’s suggestion. “He is actually Rob’s twin,” she remarked.

In the season premiere, Khloé opened up about the depression she was suffering from as a result of awaiting her second child while dealing with Thompson’s betrayal. Now, it seems like she’s started healing after welcoming her son. “We have had a lot of high highs, and definitely a lot of low lows,” she said in a confessional. “You can’t write this sh*t. I wish you could write this sh*t so it wasn’t our reality. But whenever you go down, you know you go back up. And that’s the beauty with this family. We don’t stay down for long.”

Khloé isn’t the only Kardashian family member that’s still hiding their new baby’s name and identity. Her sister Kylie Jenner welcomed her second child, son Wolf Webster, on Feb. 2, only to announce days later that she’s changing his name, without revealing what it is. At the end of the season finale, Kylie let fans know that nothing has changed — yet. “My baby’s name is still Wolf. I’ll let you guys know when I change it,” she teased. “Maybe I’ll tell you guys in Season 3.”