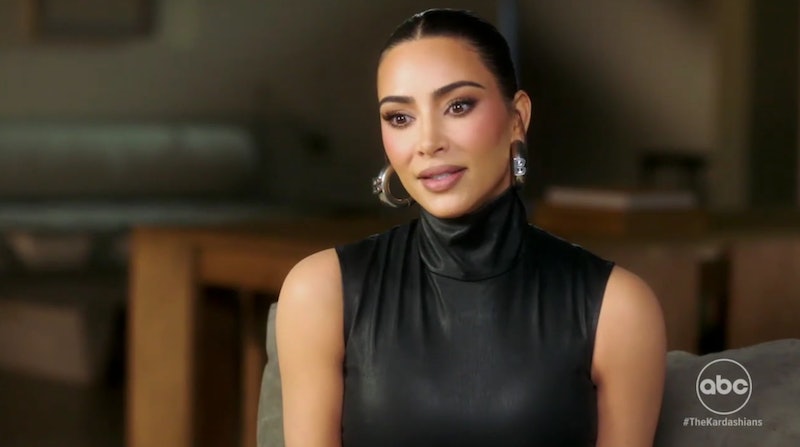 Kim Kardashian and Kanye West’s divorce has dominated headlines for more than a year now, but the Skims founder is putting her kids above everything. In a televised special that aired on ABC on April 6, The Kardashians star told host Robin Roberts that she and the rapper have an “open dialogue” with their kids and that their two eldest are very much aware their parents are no longer together.

“I’m really open and honest with them, you know?” the 41-year-old mother said. “The younger ones don’t understand as much, but my two older ones, they know what’s going on.” The reality star went on to say that it’s really important to her that she’s there to help her kids navigate everything. “Even in this crazy life that we live, you have to have an open dialogue with your children,” she added, explaining that she and Kanye still talk every day for the sake of their kids.

“I hate that it had to play out like that when it comes to family, Kanye and I will always be family,” she said, alluding to the recent public drama between the former couple. “At the end of the day I want my kids to be happy and healthy and think the world of their dad, and they do.” Elsewhere in the interview, Kardashian said that she often has to “take the high road.” “It’s hard but at the end of the day everyone has their own ways of communicating and I’ve always been a champion of [Kanye] speaking his truth and I would always want that,” she said.

Kim Kardashian and Kanye West have faced a smorgasbord of challenges since announcing their divorce in February 2021. While they initially agreed to amicably co-parent their four children — North, 8, Saint, 6, Chicago, 4, and Psalm, 2 — the rapper made it very clear that the arrangement wasn’t working for him when he publicly begged for Kim’s forgiveness in November, amid reports that she was dating comedian Pete Davidson. But the Skims founder didn’t give in. The next month, she filed legal documents requesting to expedite their divorce.

The paperwork, which was obtained by People, said that their marriage had “irremediably broken down” and that there was “no possibility” of getting back together. “No counseling or reconciliation effort will be of any value at this time,” Kardashian stated. “[West] and I both deserve the opportunity to build new lives. Therefore, I am asking that my request to bifurcate and terminate our marital status be granted.” The following month, the tension increased dramatically when West claimed that he wasn’t invited to his daughter Chicago’s birthday party.

That wasn’t the first time West said he was denied access to his children. In a January interview with Hollywood Unlocked, he claimed that Kardashian barred him from entering her house to visit their kids. He also noted that the same rules don’t seem to apply to Davidson, who has been allowed “in the house that I can’t even go to.” Later, the rapper insinuated that Kardashian and Davidson’s Oct. 10 kiss on Saturday Night Live was done to spite him. “How you gonna bring me to SNL and kiss the dude you dating right in front of me?” he asked.

READ NEXT: Who Is The Richest In The Kardashian-Jenner Family?

Things only got messier in February when the exes fought on Instagram about North’s presence on TikTok. “Divorce is difficult enough on our children and Kanye’s obsession with trying to control and manipulate our situation so negatively and publicly is only causing further pain for all,” Kim wrote after Kanye made it clear that he didn’t want his daughter using TikTok. The reality star went on to say that she’s always wanted a “healthy and supportive co-parenting relationship” but Kanye has made it “impossible every step of the way.”

In a series of now-deleted posts, West claimed that his estranged wife tried to “kidnap” Chicago by not giving him the address to her birthday party. He also alleged that she accused him of stealing and being on drugs. However, it would be remiss not to mention that a huge cause of the tension between Kardashian and West is the Keeping Up With the Kardashian star’s new relationship. The rapper has been taking swipes at Davidson for months. And in February, Davidson shared screenshots of a tense text conversion he had with the rapper.

Despite Kanye’s disapproval, Kim seems thrilled about her relationship with the 28-year-old Staten Island native. “I am a relationship kind of girl, for sure, and I wouldn’t be with someone if I didn’t plan on spending a lot of time with them,” Kim told Roberts in the special. “Obviously, I want to take my time, but I’m very happy and very content. And it’s such a good feeling to be at peace.” But if you’re expecting to see Davidson in the first season of Kardashian’s new Hulu series, think again.

“I have not filmed with him,” the KKW Beauty founder said in Variety’s March cover story. “And I’m not opposed to it. It’s just not what he does. But if there was an event happening and he was there, he wouldn’t tell the cameras to get away.” And even though he won’t be making a cameo, their relationship will definitely be a topic of discussion. According to Kardashian, viewers will find out “how they met and who reached out to who and how it happened” this season. She said, “I’m definitely open to talking, and I definitely explain it.”

The Kardashians premieres on Hulu on April 14 with new episodes every Thursday.

More like this
North West Will Make Her Acting Debut Alongside Mom Kim Kardashian
By Radhika Menon
Everything You Need To Know About Kanye's Post-Kardashian Dating Life
By Bustle Editors
Did Pete Davidson Remove His Kim Kardashian Tattoos? Photos Point To Yes
By Alyssa Lapid
Khloé Kardashian Writes Touching Instagram Tribute To Tristan Thompson’s Mother
By Alyssa Lapid
Get Even More From Bustle — Sign Up For The Newsletter
From hair trends to relationship advice, our daily newsletter has everything you need to sound like a person who’s on TikTok, even if you aren’t.