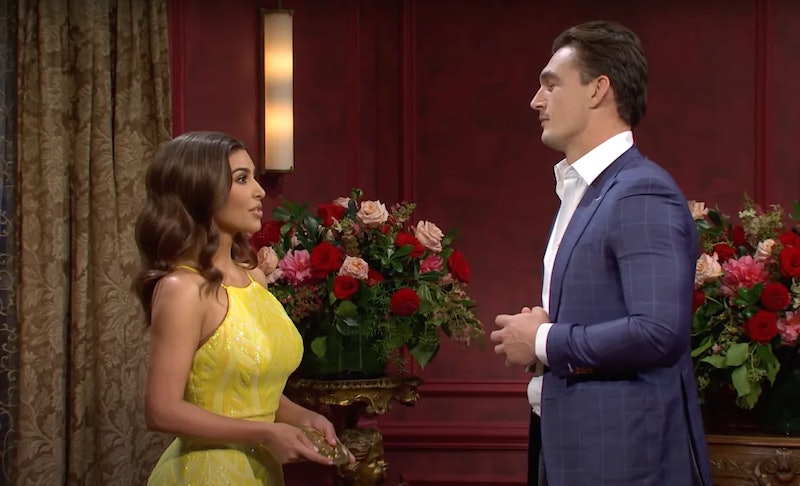 It’s been over 24 hours since Kim Kardashian hosted Saturday Night Live, but her die-hard fans still can’t get over her spoof of The Bachelorette. During the episode, which aired on Saturday, Oct. 9, the Skims founder played Rochelle, a character who was searching for the love of her life among a group of men that included Chace Crawford, Jesse Williams, Chris Rock, Blake Griffin, John Cena, and yes, noted Bachelorette heartthrob Tyler Cameron.

“I have no doubt in my mind that my husband is in this room,” the reality star said, mocking a line that is often said on the hit reality series. “In fact, I wish I could marry each and every one of you, but that would be way too many husbands.” Kardashian — er, Rochelle — then went on to select who would continue. After choosing Cameron and thanking him for being vulnerable by showing off his “hot body,” the model said that he would see her “in the hot tub,” which is where things tend to heat up on the show.

After the sketch aired, Cameron took to Instagram to reflect on the experience. “So I did a thing last night,” the 28-year-old wrote alongside a screenshot of him accepting a token from Kardashian. “So much fun joining Kim on her big night on SNL! Being vulnerable pays off. See you in the hot tub.” Of course, the skit was only supposed to be a joke. However, plenty of fans seem convinced that they would make a great couple in real life.

“I support this couple,” one Instagram user commented. Most of Cameron’s followers seemed to agree, with one person writing that they would totally “ship a Tyler C + Kim K romance.” Another fan added that the duo would “quite literally make the hottest couple,” and it seems that several members of Bachelor Nation think so, too. “Cute couple tbh,” Rachael Kirkconnell wrote. Matt James, also commented, referring to his best friend as “my dawg” and leaving three laughing emojis.

While it’s unlikely that anything romantic will come from Kardashian’s hosting gig, it’s worth noting that both she and Cameron are single right now. The Keeping Up With the Kardashians star filed for divorce from Kanye West in February, and she even joked on SNL that they split because of the rapper’s “personality.” Cameron, for his part, recently split from his girlfriend Camila Kendra after eight months together.

According to a Page Six insider, “things took a turn” shortly after the former Bachelorette contestant gushed over Kendra on an episode of Watch What Happens Live With Andy Cohen. “Things were going well until they weren’t,” a source told Us Weekly of their breakup. “Friends were surprised things ended so quickly.”