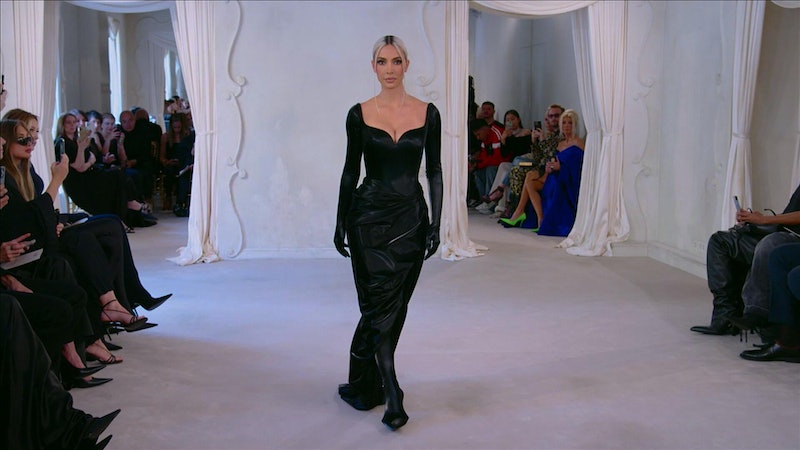 Kim Kardashian was more nervous to walk the Balenciaga Couture Show in July during Paris Couture Week than she was for most things, but she had a surprising famous friend that helped her get through it. On the Season 2 finale of The Kardashians, Kim told Balenciaga creative director Demna Gvasalia the tip she received from Demi Moore about to use for walking in his fashion show.

“Demi Moore gave me really good advice, because I just said I’m walking in a show, I didn’t tell her what,” she said, before admitting that she wasn’t sure exactly what the actor told her. “It’s really good, and I’m gonna look at it before,” she promised, laughing. “It said something like, ‘Anytime I do something I’m nervous about, think about what you’re receiving instead of what you’re giving.’ Or maybe it’s the opposite way, I don’t know. I’ll reread it.”

In her confessional, Kim admitted that she was feeling much more nervous than usual about walking the runway. “I don’t know why I’m nervous about this, but I am,” she said. “It’s just a really big deal when the head designer of a house wants to start a relationship, and you kind of have one shot.” The nerves might have something to do with this being her couture show debut, and her first time on a runway since walking for Ed Hardy in the 2000s.

Aside from Moore, Kim also has a model in her family that was there to give her encouragement — even from 10,000 miles away. Kim woke up her sister Kendall Jenner over FaceTime to ask for some support. “I just needed some Kendall vibes, I’m sorry, I’m so nervous,” she said, to which Kendall responded, “Don’t be nervous, you’re gonna be totally fine.” The only pointer she had for Kim was to stay dead in the face. “Yeah, no smiling,” she repeated.

Kim was in good company, as stars and supermodels like Dua Lipa, Nicole Kidman, and Naomi Campbell also walked the show, and she had great support, with mom Kris Jenner and daughter North West sitting in the front row.

She ended up holding her own with the models, alleviating her worst fears of falling over. But when all was said and done, she really had no worries about doing a great job. “I’ll never disappoint anyone, and that’s just who I am,” she said in a confessional. “I always want to be easy to work with, and efficient and professional and get the job done.”