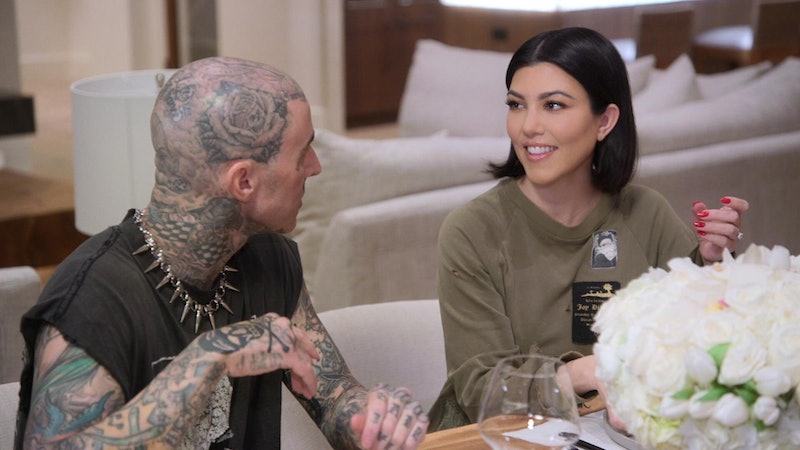 Kourtney Kardashian and Travis Barker are trying to have a child of their own, which has come with some unexpected effects. On the third episode of The Kardashians Season 2, the Poosh founder explained how her ongoing IVF process has caused major changes to her body that she disliked at first but has grown to “love” thanks to her now-husband.

While getting ready for her Bustle cover shoot, Kardashian gave her team an update on her IVF journey, explaining that her body has changed thanks to “all of the hormones” the doctors put her on. Now, she’s learned to love those changes to her body thanks in part to Barker, who’s great at reassuring her when she feels insecure. “Everyday, Travis is like, ‘You’re perfect,’” she said. “If I make one complaint, he’s like, ‘You’re perfect. You’re so fine. You’ve never been better.’ And now I’m so into it. My ass is amazing. I’m so into my thicker body.”

In a confessional, Kardashian admitted that it took “a lot” for her to feel comfortable with her body again, which isn’t helped by fans’ inquiries about pregnancy. “Eight months of IVF treatment has definitely taken a toll on my body, mentally and physically,” she said in a confessional. “Everyone always comments in every photo that I’m pregnant, and obviously we wish that, but if it’s in God’s plan, then it is.” She once again attributed Barker for helping to improve her mindset. “Having a partner who’s so supportive of me and always complimenting me no matter what, it’s just helped me to really embrace the changes, actually to the point where I love the changes now,” she said.

Kardashian continued to explain that she once used her weight to assess her physical health, saying she “used to be stuck on the number,” which she now realizes was a sign of something else entirely. “When I was super skinny, it’s like a time where I was super anxious,” she said. “Not about eating, not about staying at a certain weight, but just in toxic relationships. I used to always say this: ‘When I’m super skinny, just know I’m not happy.’”

Clearly, Kardashian is happier than ever since she’s been with her now-husband, who has been by her side as she undergoes IVF treatments. In April, she admitted that IVF “hasn’t been the most amazing experience” in a Season 1 episode of The Kardashians, explaining that she thinks her medications gave her depression and acted as a contraceptive instead. “I have everything in the world to be happy about,” she said. “I just feel a little bit off, not like myself, super moody and hormonal, like I’m a lunatic half the time.” The star has shut down pregnancy speculation on Instagram multiple times, telling fans that they’re just seeing “a woman's body” and signaling just how comfortable she’s become with herself.