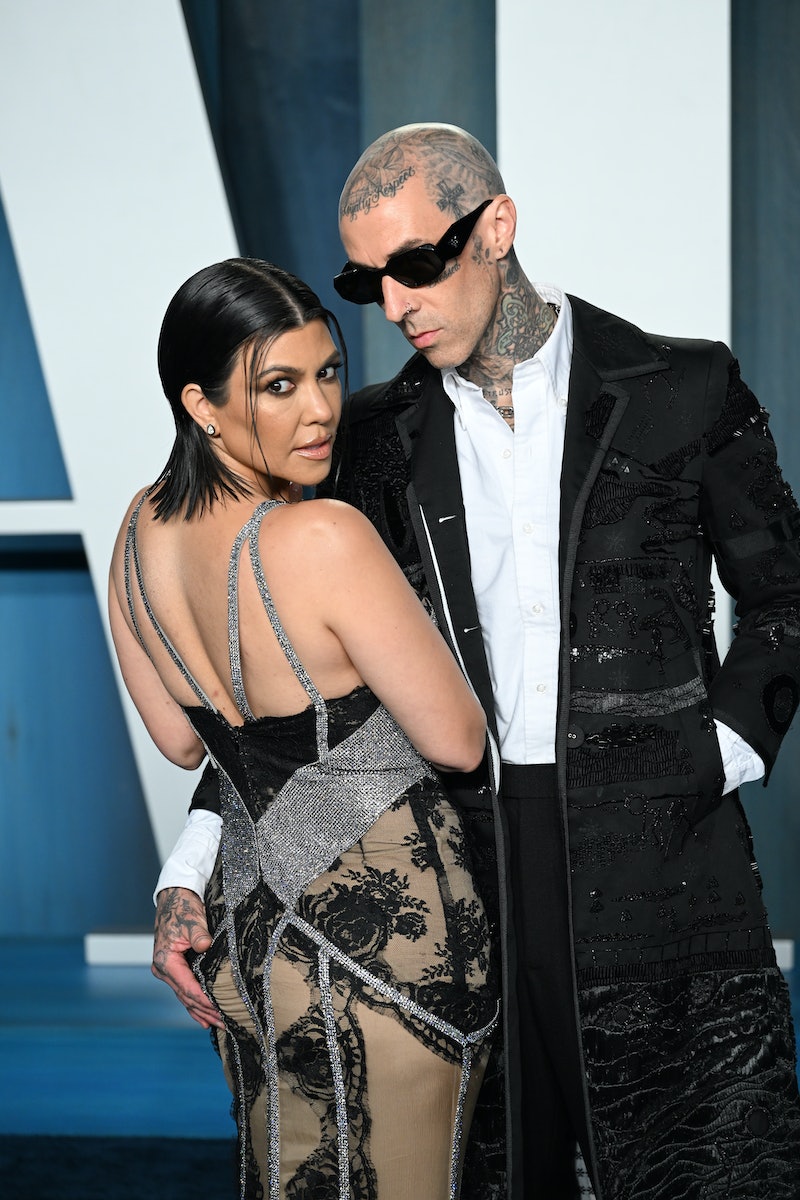 Kourtney Kardashian and Travis Barker broke the internet this week when TMZ reported that the couple tied the knot in a secret Las Vegas ceremony mere hours after attending the Grammys. But perhaps their surprise marriage shouldn’t have come as much of a shock. In a televised special that aired on ABC on Wednesday, April 6, the Poosh founder gushed over her now-husband and told host Robin Roberts that she was afraid to move the Blink-182 drummer out of the friend zone.

When the host told Kardashian that she and Travis can’t seem to keep their hands off each other, the reality star said, “It’s so funny. When we think about, like, ‘this is us, can you believe it? We’re Kourtney and Travis who are friends.’” The two have been close friends for years. Travis was first linked to the Kardashians in 2006 when he was dating Paris Hilton, who was Kim Kardashian’s close friend at the time. He also encouraged the family to launch Keeping Up With The Kardashians.

In 2017, Travis revealed to ET that his family occasionally hosts dinners with Kourtney’s family. That same year, he appeared on KUWTK and his relationship with Kourtney only grew stronger. Still, Kardashian was apprehensive about taking their friendship to the next level. “I felt like deep down if we looked into each other’s eyes and made it physical that it would just be over,” she told Roberts.

Considering how smitten Kourtney is with the rockstar now, we probably should’ve seen their surprise nuptials coming. According to TMZ, the pair walked into the chapel at around 1:30 a.m. on April 4 ready to exchange their vows in front of an Elvis Presley impersonator, who officiated their wedding. Kardashian and Barker reportedly presented a marriage license to the chapel’s owner, who served as a witness, and brought their own security and photographer.

If getting married in Vegas sounds too crazy, don’t worry — the couple’s Las Vegas wedding will reportedly be one of “several.” And like their engagement, their next celebration will likely include their respective families. Barker proposed to his now-wife in October 2021 on the beach at sunset with both of their families present. The musician walked with Kardashian into a heart made out of red and white roses before popping the question. The mom of three revealed the engagement with a photo from the proposal. “Forever @travisbarker,” she wrote.

According to E!, Kardashian had no idea about the engagement and couldn’t stop telling Barker that she loved him. “I could see Kourtney smiling from ear to ear and put her hand over her mouth looking surprised,” an insider said. “The family cheered for them and went back into the hotel.” The proposal reportedly took place at the Rosewood Miramar Hotel in Montecito, California. Kourtney’s sisters Kim, Khloé, Kendall, and Kylie were all there, as well as their mom Kris, Corey Gamble, and Tristan Thompson. Barker’s children were also in attendance.

Fortunately, fans of the famous family will soon be getting an even better glimpse at the newlyweds’ engagement. A trailer for the family’s upcoming Hulu series hints that the proposal will be included. “This makes me so happy,” Kris says through tears in the preview, which dropped on Feb. 22. In response, Kim quipped, “She’s never had a reaction like that for me and it’s happened, like, a few times.”

The Kardashians is scheduled to hit the streaming platform on April 14, with new episodes every Thursday.

More like this
North West Will Make Her Acting Debut Alongside Mom Kim Kardashian
By Radhika Menon
Everything You Need To Know About Kanye's Post-Kardashian Dating Life
By Bustle Editors
Did Pete Davidson Remove His Kim Kardashian Tattoos? Photos Point To Yes
By Alyssa Lapid
Khloé Kardashian Writes Touching Instagram Tribute To Tristan Thompson’s Mother
By Alyssa Lapid
Get Even More From Bustle — Sign Up For The Newsletter
From hair trends to relationship advice, our daily newsletter has everything you need to sound like a person who’s on TikTok, even if you aren’t.