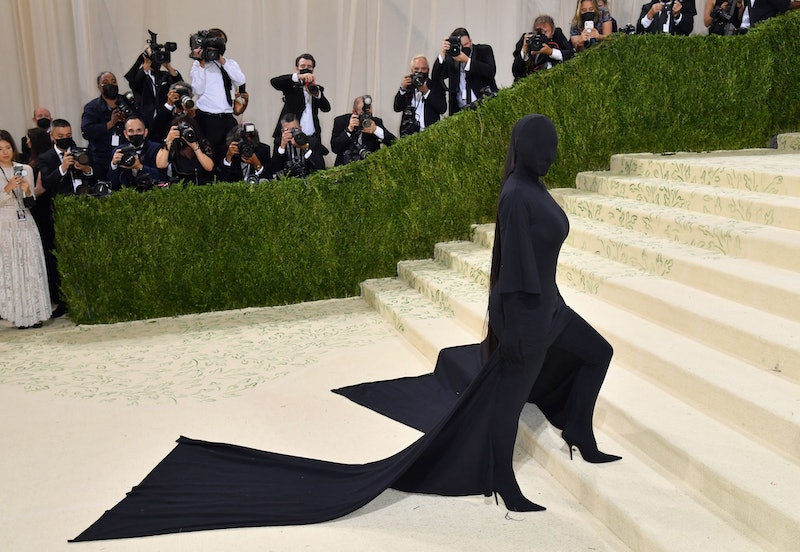 When tasked with choosing between fashion and function, Kim Kardashian always understands the assignment — especially when it comes to her annual Met Gala creations. For this year’s Costume Institute exhibition, Kardashian covered up from head to toe in a Balenciaga haute couture gown with a matching train and mask, leading many to wonder how she could’ve possibly navigated the evening. While recently discussing the look that launched a thousand memes on The Ellen DeGeneres Show, mom Kris Jenner finally revealed that, yes, the outfit was as wildly cumbersome as it seemed, though all in the name of fashion.

“The whole evening of the Met Ball, Kim couldn’t see and she couldn’t breathe,” the Kardashian-Jenner family matriarch, who also attended the event with boyfriend Corey Gamble, explained on the daytime talk show. “Corey was walking around, we were all together, and he was leading her to where we were supposed to go and helping with her ponytail. Suddenly he was somebody pulling her around and a hairstylist all at the same time.”

Though details of what happens behind the closed doors of New York City’s Metropolitan Museum of Art during the star-studded event are largely kept secret, Jenner did share some comedy that Kardashian’s Balenciaga look created. “Halfway through the Met Ball they asked her to do something, like do a dance for Vogue,” Jenner recalled. “And we were on the stage. She had no idea what she was doing. It was so funny.”

This isn’t the first clue fans have gotten about exactly how much Kardashian’s mask obstructed her vision. After a photo of her and younger sister Kendall Jenner chatting on the red carpet went viral, the Skims co-founder posted an explanation in her Instagram stories: “Kendall was calling my name and I couldn’t see who it was but I saw the outline of her sparkly dress 😭.”

It seems that Kardashian also noticed that some social media commenters were questioning how the look fit the event’s theme of American fashion. Her official Instagram response? “What’s more American than a T-shirt head to toe?!”

Whether or not you’re a fan of Kardashian’s unique sartorial choices, there’s no denying that they spark plenty of conversations — even if a face covering temporarily prevents her from participating in them herself.