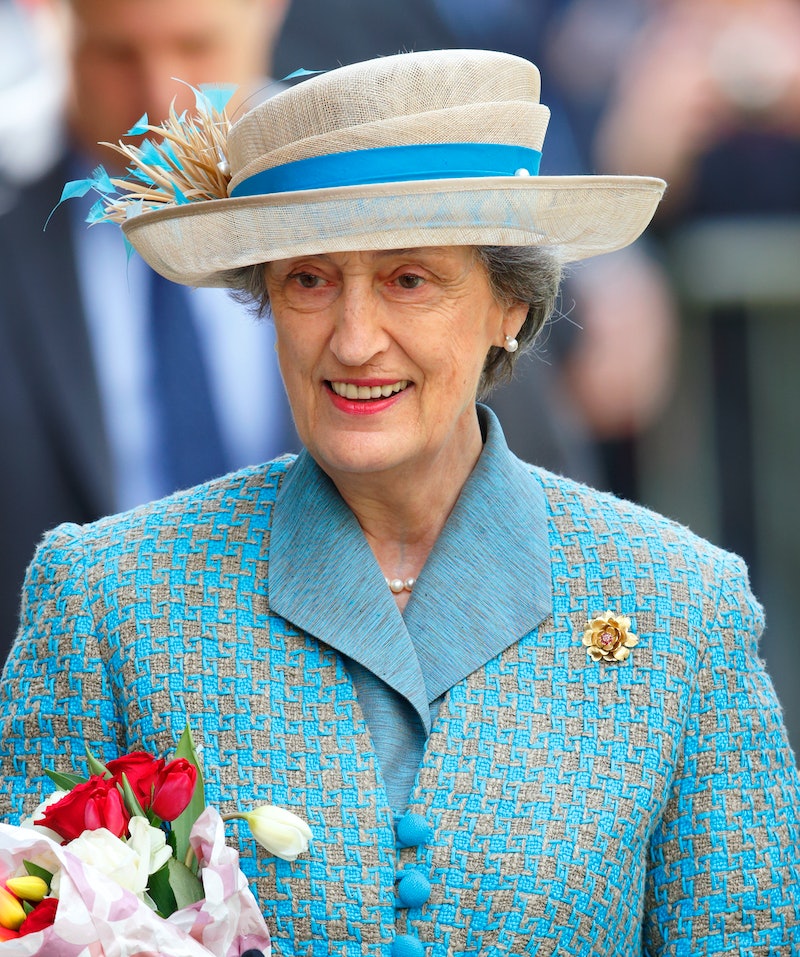 After over sixty years of service, Lady Susan Hussey is reported to be the royal aide who stepped down from her role due to allegations of “unacceptable and deeply regrettable comments” made to charity boss Ngozi Fulani during a Buckingham Palace event. Fulani opened up about the “trauma” of being subjected to “insulting” questions regarding her heritage. The troubling incident has sparked many conversations. But just who is Lady Susan?

Born in Somerset to the aristocratic Walgrave family in 1939, Lady Susan, now 83, first started working for the Royal Family in 1960, mostly answering letters following the birth of Prince Andrew. She was later promoted to lady-in-waiting and became a close friend and confidant to the late Queen Elizabeth II, serving in the unpaid role for decades. Lady Susan memorably rode with the Queen in the royal Bentley as she went to Prince Phillip’s funeral in 2020, and attended her Majesty’s funeral earlier this year.

A year before she began working with the palace, Lady Susan married media manager Marmaduke Hussey, who was 16 years her senior. Previously, he served as a soldier in World War II but was captured by German troops after five days. “His leg was amputated in captivity and the Germans later repatriated him on mercy grounds,” reads a Guardian obituary of the late Duke, who died in 2006. In the late 80s, Hussey became Chairman of the Board of Governors of the BBC, and was said to be strongly against airing Panorama’s controversial interview with Princess Diana in 1995. He resigned two months after it aired, writing in his memoir that these events “darkened my last months at the BBC.”

Reportedly known as “number one head girl” in the palace, Lady Susan is godmother to Prince William. As part of her role, she was often tasked with helping new arrivals including the late Princess Diana and Meghan Markle adjust to royal life, though author Christopher Wilson once claimed in his book The Windsor Knot that the late Princess Diana took a "personal dislike" to the courtier, per the BBC. In 2013, she was awarded with the Dame Grand Cross of the Royal Victorian Order to recognise her long service. Lady Susan briefly features in The Crown, portrayed by Haydn Gwynne

Following the Queen’s death, the royal aide was appointed a lady of the household by King Charles, and was tasked with helping to host palace events.

Though Buckingham Palace didn’t name the royal aide responsible for the recent “unacceptable comments,” Fulani and others present identified Lady Susan as the person involved. Buckingham Palace announced that the “individual concerned would like to express her profound apologies for the hurt caused and has stepped aside from her honorary role with immediate effect.”

More like this
Princess Diana’s Brother Shared A New Photo Connected To Her Childhood
By Darshita Goyal
Helena Bonham Carter Doesn't Think 'The Crown' “Should Carry On"
By Sam Ramsden
The Spice Girls Are Set To Reunite At King Charles III’s Coronation
By Sam Ramsden
Kate Middleton Wore The Ultimate '90s Power Suit
By Sam Ramsden
Get The Very Best Of Bustle/UK
Sign up for Bustle UK's twice-weekly newsletter, featuring the latest must-watch TV, moving personal stories, and expert advice on the hottest viral buys.