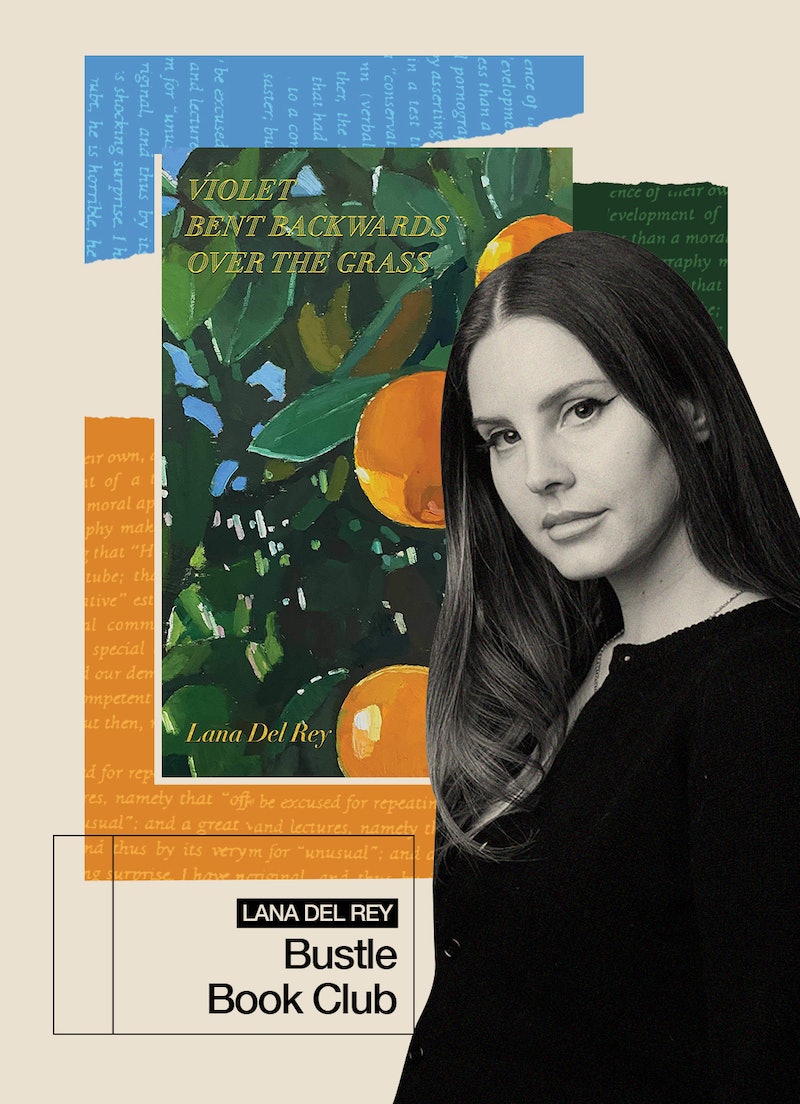 When Lana Del Rey first began writing poetry, her words would come to her suddenly. Oftentimes a poem would reveal itself in its entirety, ready for Del Rey to dictate it onto the page. “I would drop everything if any sort of poem started to come to mind,” she tells Bustle. “It’s something I’ve experienced before with songwriting but less and less in the last few years.” While the singer-songwriter has sprinkled her music with homages to poets throughout her career in lyrics like “I've been tearing around in my f*cking nightgown, 24/7 Sylvia Plath,” Del Rey only began writing poetry in 2017, when she was experiencing writer’s block while crafting her album Norman F*cking Rockwell. The result of that creative exercise is Violet Bent Backwards Over the Grass, a sprawling collection of 13 longform poems and a selection of shorter works.

Violet’s poems tap into Del Rey’s signature gauzy, glamorous style. She muses about 1960s Hollywood, heartbreak, vaping, and summertime while assuming different personas — from Del Rey to a woman named Tessa DiPietro, to even Elizabeth Grant, her given name. Paired with personal photographs, the collection is a melancholy meditation on Los Angeles. But Del Rey says her inspirations extended beyond California.

“My perfect muse is probably wherever I am. When I was in New York the city was definitely defining for my attitude. I’m slightly aqueous and malleable in that way,” she explains. “When I was in the Midwest I felt very much called to be there. I felt like I was catching a little bit of lightning in a bottle by having so much space in the air to work. It gave me that electric feeling in my stomach that I get right before I create something great.”

Ahead of Violet Bent Backwards Over the Grass’ release, Bustle spoke with Del Rey about reading books on midwifery, her next poetry collection entitled Behind the Iron Gates — Insights From an Institution, and why spaghetti is a great writing snack.

On what she’s reading now:

At the moment I’m mostly interested in reading about midwifery and herbalism and I’m re-watching the BBC version of Pride and Prejudice.

On wanting to go back to school:

I always go about sharpening my craft in a roundabout way. For instance, my writing got better when I stopped practicing other things. I think for me the biggest tool has been just allowing myself enough space to let my innermost thoughts reveal themselves to me.

At this point I’ve done that enough and I am actually ready to get more seriously into the craft of writing — or the idea of taking more classes in school. I’ve said it before but I often wondered how much different my life would be if I wasn’t worried about being completely humiliated by endeavoring on certain projects or revealing more of my home life. But I think I’ve actually done that in Violet and I certainly have in the second book I’m working on Behind the Iron Gates — Insights From an Institution.

I love reality TV. I’m sure I’ve written 100 songs from cues to those shows. Self-care for me is kind of different every day. Sometimes I allow myself to stay in bed late in the morning and just daydream. I love to sit around and talk shit with my closest friends, watch long Target hauls on YouTube. I also like to sit around and read things that I’m interested in, books that involve magic or old books of poems I’ve collected. I have a lot of animals so taking care of them one by one I’m sort of pouring that nurturing spirit out into anything I can.

On licking her wounds after a bad day of writing:

I just try and stay super still. I try not to overextend myself and just do little things that keep me inspired, like staying a little bit too long in the parking lot of the Walmart reading a magazine that I just bought, or going a little bit too far out of town to an eccentric book store, or buying a coffee in a town I’ve never been.

I don’t do anything or wear anything to get into the creative process but I find if I’ve written something beautiful, I like to take some time to put on something beautiful for the rest of the day. I always take a hot shower and putting on a dab of perfume and lipstick feels kind of rewarding to me and in line with the process of creating something ethereal.

On the snacks that fuel her creativity:

Kombucha, slurpees, spaghetti every night. Coffee in the evening with an old movie playing on one phone in the car and dictating poems with the other phone.